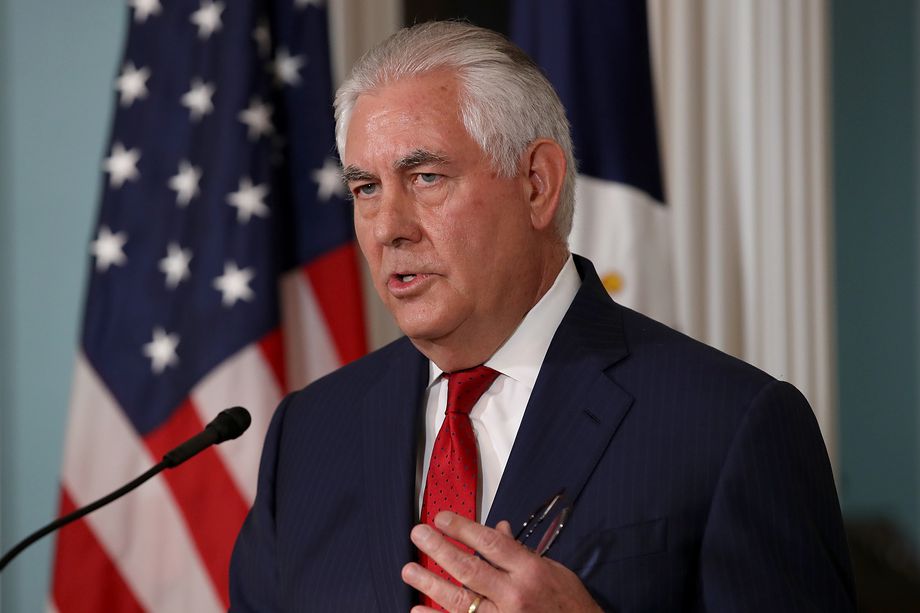 President Trump said Tuesday he has ousted Secretary of State Rex Tillerson and plans to nominate CIA Director Mike Pompeo to replace him as the nation’s top diplomat, orchestrating a major change to his national security team amid delicate outreach that includes possible talks with North Korea.

President Trump said Tuesday he has ousted Secretary of State Rex Tillerson and plans to nominate CIA Director Mike Pompeo to replace him as the nation’s top diplomat, orchestrating a major change to his national security team amid delicate outreach that includes possible talks with North Korea.

Trump and Tillerson have had a fraught relationship for many months. Trump told reporters Tuesday that he ultimately decided to fire the secretary because they disagreed over strategy in key areas of foreign policy, such as the 2015 Iran nuclear deal, the approach to North Korea and the overall tone of U.S. diplomacy.

Tillerson said he received a call from Trump around noon Tuesday, more than three hours after his firing was first reported by The Washington Post and announced minutes later in a tweet from the president.

His voice quavering, Tillerson thanked career diplomats for their “honesty and integrity” and the American people for “acts of kindness,” and he singled out Defense Secretary Jim Mattis for their partnership and mutual support of diplomacy. But he notably did not thank Trump or praise his policies.

Tillerson said he will remain in his post until March 31 but is delegating all authorities for running the State Department to Deputy Secretary John Sullivan and is committed to ensuring “an orderly and smooth transition.” The deposed diplomat also made a clear statement about Russian aggression: “Much work remains to respond to the troubling behavior and actions on the part of the Russian government.”

The shake-up left officials at the State Department and throughout the national security community flummoxed, and the circumstances of the firing were in dispute.

White House officials said that — as Tillerson traveled through Africa last week — White House Chief of Staff John F. Kelly called to wake him up in the wee hours there Saturday to alert him that Trump had decided to replace him. Trump had told his chief of staff he wanted to announce he was replacing Tillerson on Twitter. Kelly urged him to hold off.

But a top State Department spokesman offered a different version of events — and was swiftly fired for contradicting the White House.

Steve Goldstein, undersecretary of state for public diplomacy and public affairs, said that Tillerson was “unaware of the reason” for his firing and had not spoken directly with Trump. He said Kelly told Tillerson in the call only that “he could expect a tweet” from the president, but it was not conveyed that the decision to fire him was final.

“He found out that he was terminated today,” Goldstein said.

Goldstein’s dismissal, which came just before he was scheduled to brief reporters about the shake-up at Foggy Bottom, was confirmed by a State Department official. West Wing officials had accused him in recent weeks of privately criticizing White House decisions to reporters. Asked Tuesday about the accusation, Goldstein said: “I spoke for the secretary of state. That was part of my role as the undersecretary.”

The president and his top diplomat reached a breaking point over the past week, and media inquiries about the fraught relationship accelerated the timing of the ouster, White House officials said.

After Kelly told him he was being let go, Tillerson asked that Trump hold off on announcing the news until he had returned to the United States, and Kelly agreed, one White House official said.

Trump told reporters that he had been considering removing Tillerson for “a long time.”

“I actually got along well with Rex, but really it was a different mind-set, a different thinking,” Trump said Tuesday as he departed the White House for a trip to California. “When you look at the Iran deal, I think it’s terrible. I guess he thought it was okay . .?.?. So we were not really thinking the same. With Mike, Mike Pompeo, we have a very similar thought process. I think it’s going to go very well.”

Trump selected CIA Deputy Director Gina Haspel to succeed Pompeo as the agency’s director. She would become the first woman to run the spy agency. Both Haspel and Pompeo would need to be confirmed by the Senate at a time when the closely divided chamber has stalled on confirming dozens of Trump nominees.

Haspel, in particular, could come under added scrutiny over her past role running one of the CIA “black site” prisons where detainees were subjected to waterboarding and other interrogation methods widely denounced as torture.

The announcement of Tillerson’s departure sent shock waves across the globe. Many U.S. diplomats and foreign leaders reacted with disbelief because they assumed Tillerson had finally begun to settle into his job after rumors of his ouster had swirled for months — even taking on a nickname, Rexit.

In a statement first issued to The Post, Trump praised both Pompeo and Haspel. He highlighted Pompeo’s educational background, graduating first in his class from West Point and with honors from Harvard Law School, and celebrated the “historic milestone” of Haspel becoming the first woman to lead the CIA.

Pompeo said in a statement that he was “deeply grateful” to Trump and said he looked “forward to representing him and the American people to the rest of the world to further America’s prosperity.”

Trump also had words of praise for Tillerson despite their well-documented rifts: “Finally, I want to thank Rex Tillerson for his service. A great deal has been accomplished over the last fourteen months, and I wish him and his family well.”

[No one more surprised than Tillerson at his abrupt ouster]

In his statement, Goldstein said: “The secretary had every intention of staying because of the critical progress made in national security and other areas. He will miss his colleagues greatly at the Department of State, and the foreign ministers he’s worked with throughout the world. The secretary did not speak to the president, and is unaware of the reason. He is grateful for the opportunity to serve, and believes strongly that public service is a noble calling.”

The president has long clashed with Tillerson, who he believes is “too establishment” in his thinking. Trump felt it was important to make the change now, as he prepares for possible high-stakes talks with North Korean leader Kim Jong Un, as well as upcoming trade negotiations, three White House officials said.

Tillerson was especially frustrated when Trump last Thursday unilaterally agreed to the meeting with the North Korean leader Kim while Tillerson was traveling in Africa, according to officials familiar with his thinking.

Tillerson had long expressed interest in a diplomatic solution to the nuclear standoff with North Korea, and was upset to have been left totally out of the loop when Trump decided to move forward, according to a White House official.

Tillerson was routinely undermined in his post, including by Jared Kushner, the president’s son-in-law and a senior White House adviser who took charge of the Middle East and Mexico diplomatic portfolios.

Tillerson also clashed frequently with national security adviser H.R. McMaster and U.S. Ambassador to the United Nations Nikki Haley, among others. State Department officials took notice — and were chagrined — that Pompeo did not cite Tillerson when he appeared on television shows Sunday to explain the North Korea developments.

Although he frequently complained to colleagues that Trump was too mercurial and impulsive, and voiced frustration that the president struggled to focus during meandering conversations, Tillerson was determined to stay in his job and would not quit, according to one person who has discussed these concerns with the secretary. Tillerson’s stance, this person said, was: “If he wants me gone, he’ll fire me.”

On the flight back from Nigeria, Tillerson appeared to break with the White House in his assessment of the poisoning of a former Russian spy and his daughter in Britain. He singled out Russia as responsible for the attack, echoing the finger-pointing of the British government.

“It came from Russia,” Tillerson said, according to the Associated Press. “I cannot understand why anyone would take such an action. But this is a substance that is known to us and does not exist widely.”

Earlier Monday, White House press secretary Sarah Huckabee Sanders condemned the attack as “reckless, indiscriminate and irresponsible,” and expressed solidarity with Britain, but would not say whether the United States believes Russia was behind it.

Pompeo long has been mentioned as Tillerson’s most likely replacement. As CIA director, the former Republican lawmaker from Kansas developed a warm relationship with Trump, often delivering the President’s Daily Brief to Trump in person and racing over to the West Wing at a moment’s notice to field the president’s queries on a range of topics.

Pompeo often is found in a host of meetings that do not necessarily deeply involve his agency, simply because Trump likes him, said one White House official.

Sen. Tom Cotton (R-Ark.) was initially mentioned as a replacement for Pompeo, but Trump opted to promote from within by elevating Haspel.

White House officials, still reeling from the loss of a Republican Senate seat in Alabama, were reluctant to tap Cotton and create a vacancy in Arkansas, and they thought Cotton could be more useful to Trump as a loyal ally in the Senate, according to officials familiar with the deliberations.

Speculation about Tillerson’s ouster has come in waves, including in October after NBC News reported that the secretary of state had called Trump a “moron.” Tillerson did not deny the remark.

Tillerson, 65, spent his career at ExxonMobil, climbing the ranks at the oil giant to become chief executive officer, where he cut deals across the Middle East and in Mexico. Having never worked in government before being named secretary of state, he struggled to adapt to Washington’s ways and the administration’s culture of backstabbing.

Tillerson emerged as one of the strongest voices in the administration critical of Russia. For months, he has been saying Russia clearly meddled in the 2016 U.S. election, even as Trump shied away from any critical remarks.

Trump seemed to resent pressure to stay the course on such issues as China’s trade practices, the war in Afghanistan and the Iran nuclear deal, those people said.

Tillerson pushed Trump to preserve the Iran accord, at least for now, with a July pronouncement that Iran was meeting its end of the bargain — which curbs Iran’s nuclear program in exchange for lifting international sanctions.

Trump said in a Wall Street Journal interview that he regretted making that determination. In October, Trump kept in place the sanctions waivers, but warned he may not continue the policy when the next review is due in May.

Although Tillerson supported the approach to the war in Afghanistan that Trump announced last year, he felt no need to frame U.S. goals in the same maximal terms as the commander in chief. Where Trump proclaimed on Aug. 21 that “our troops will fight to win,” Tillerson laid out a much more modest agenda.