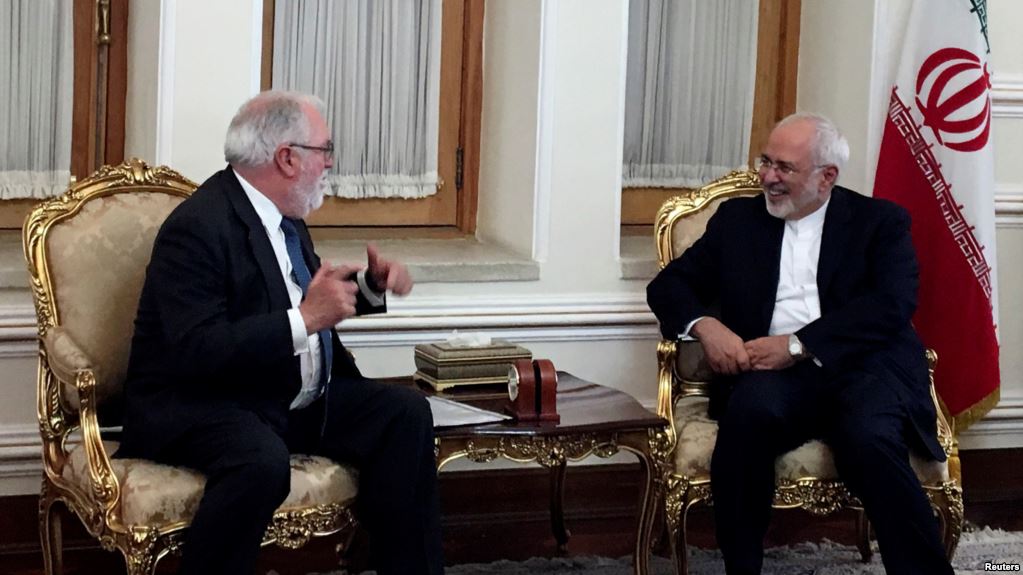 Iranian Foreign Minister Javad Zarif said Sunday that Europe's political support to save the 2015 international nuclear accord after the U.S. withdrawal was not sufficient if too many European companies end their investments in Iran.

Iranian Foreign Minister Javad Zarif said Sunday that Europe's political support to save the 2015 international nuclear accord after the U.S. withdrawal was not sufficient if too many European companies end their investments in Iran.

"The cascade of decisions by EU companies to end their activities in Iran makes things much more complicated," Zarif said after meeting with European Union energy commissioner Miguel Arias Canete.

Iranian state broadcaster IRIB quoted Zarif as saying, "With the exit of the United States from the nuclear deal, the expectations of the Iranian public towards the European Union have increased... and the EU's political support for the nuclear agreement is not sufficient."

With the threat of reimposed U.S. sanctions against European companies doing business in Iran, several foreign firms have already pulled out of the country.

French oil major Total said it is abandoning its $4.8 billion investment in Iran unless it gets a sanctions waiver from the U.S., while another energy company, Engie, said it plans to stop its engineering work in Iran before November, when U.S. says it will reimpose sanctions.

"The European Union must take concrete supplementary steps to increase its investments in Iran," Zarif said. "The commitments of the EU to apply the nuclear deal are not compatible with the announcement of probable withdrawal by major European companies."

EU leaders have pledged to try to keep Iran's oil trade flowing, but conceded it would not be easy.

Arias Canete said, "We have to preserve this agreement so we don't have to negotiate a new agreement. Our message is very clear. This is a nuclear agreement that works."

If the nuclear deal falls apart in the aftermath of President Donald Trump withdrawing the U.S., Iran has threatened to resume industrial uranium enrichment "without limit."

Tehran's economy was hobbled by the sanctions imposed before the international agreement was reached to restrain Iran's nuclear development, in exchange for ending the sanctions. Even as Trump withdrew the U.S., the remaining five signatories --Britain, France, Germany, Russia and China -- have all said they intend to stay in the pact with Tehran.

The U.S. has said it wants to reimpose sanctions to force Iran to negotiate a new deal with tighter curbs to prevent its development of nuclear weaponry, end its ballistic missile tests and rein in its military advances in the Middle East.