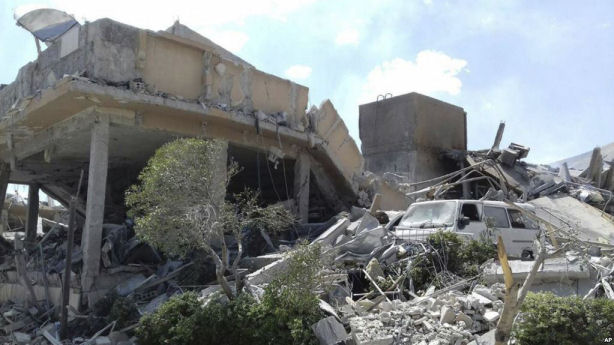 The U.S., U.K. and France have defended their decision to launch coordinated strikes on the Syrian regime Friday night, calling it a necessary move to stop the use of chemical weapons by Syria and its allies Russia and Iran.

This photo released by the Syrian official news agency SANA shows the damage to the Syrian Scientific Research Center, which was attacked by U.S., British and French military strikes,Syria, April 14, 2018. (AP)

The U.S., U.K. and France have defended their decision to launch coordinated strikes on the Syrian regime Friday night, calling it a necessary move to stop the use of chemical weapons by Syria and its allies Russia and Iran.

“Could not have had a better result,” U.S. President Donald Trump said of the “perfectly executed” strikes in a tweet Saturday morning. “Mission Accomplished!”

In a statement Friday night, British Prime Minister Theresa May accused the Syrian government of “using weapons against its own people in the most cruel and abhorrent way.”

“The persistent pattern of behavior must be stopped,” May said, referring to the regime’s suspected chemical attack on the Syrian town of Douma last week.

“Not just to protect innocent people in Syria from the horrific deaths and casualties caused by chemical weapons,” she said, “but also because we cannot allow the erosion of the international norm that prevents the use of these weapons.”

May added that Britain has “sought to use every possible diplomatic channel” to stop the regime of Syrian President Bashar Assad, “but our efforts have been repeatedly thwarted.”

“We would have preferred an alternative path,” May said. “But on this occasion, there is none.”

French President Emmanuel Macron declared that France’s “red line has been crossed” after last week’s chemical attack. In a statement, he echoed May’s call for the end of chemical weapons.

“Our response is limited to the Syrian regime’s capabilities to produce and use chemical weapons,” Macron said. “We cannot tolerate the normalization of the use of chemical weapons, which is a direct threat to the security of the Syrian people and our collective security.”

An ‘Act Of Aggression’

Assad denounced the strikes against Syria and said it made his regime even more determined to “fight and crush” terrorism.

Iranian Supreme Leader Ayatollah Ali Khamenei responded by calling Trump, May and Macron “criminals” in a speech cited by Iranian TV, according to Reuters.

“U.S., allies will not gain any achievements from crimes in Syria. Attacking Syria is a crime. U.S. president, U.K. prime minister and the president of France are criminals,” he said.

Russian President Vladimir Putin on Saturday described the strikes as an “act of aggression” that would have a “destructive influence on the entire system of international relations.”

At the Kremlin’s request, world powers will hold an emergency United Nations Security Council meeting to address the incident.

‘Where Were You Until Today?’

Canadian Prime Minister Justin Trudeau said he supported the strikes in a statement issued an hour after Trump’s announcement.

“Canada supports the decision by the United States, the United Kingdom, and France to take action to degrade the Assad regime’s ability to launch chemical weapons attacks against its own people,” Trudeau said. “We will continue to work with our international partners to further investigate the use of chemical weapons in Syria. Those responsible must be brought to justice.”?

Jens Stoltenberg, the secretary-general of NATO, said the joint attack on the “chemical weapons facilities and capabilities ... will reduce the regime’s ability” to launch further chemical attacks.

“Those responsible must be held accountable,” he tweeted.

The Jordanian government stressed the need for diplomacy to bring an end to the Syrian crisis.

“The continuation of violence will only bring more violence, death, destruction and more displacement that the Syrian people are only being the victims off,” spokesman Mohammad al-Momani said in a statement Saturday. “The political solution preserves the unity of the Syrian people, and brings back security and stability to it.”

In a similar response, Turkish Prime Minister Binali Yildirim called for “a global peace against the massacre in Eastern Ghouta and Douma.”

“For seven years, people have been slaughtered in Syria ? brutality is going on. You remembered your humanity when [the Syrian regime] used chemicals?” he asked. “Where were you until today?”

Trump on Friday night announced that a coordinated attack on the Syrian regime, launched with British and French allies, was underway.

“The purpose of our actions tonight is to establish a strong deterrent against the production, spread and use of chemical weapons,” he said. “We are prepared to sustain this response until the Syrian regime stops its use of prohibited chemical agents.”

The U.S., France and Britain have accused the Russian-backed Syrian government of launching a chemical attack in the then rebel-held town of Douma last week. The attack left about 70 people dead.

The Syrian state has denied that its forces launched a chemical attack and accused rebels of fabricating reports of the attack in order to drum up international support for its fight against the regime.

In his address to the American people, Trump singled out Iran and Russia for supporting the Syrian regime and partially blamed the countries for the chemical attack.

“I also have a message tonight for the two governments most responsible for supporting, equipping and financing the criminal Assad regime,” Trump said. “To Iran and to Russia I ask: What kind of nation wants to be associated with the mass murder of innocent men, women and children?”

“President Putin and his government promised the world that they would guarantee the elimination of Syria’s chemical weapons,” Trump continued.

“Assad’s recent attack and today’s response are the direct result of Russia’s failure to keep that promise. Russia must decide if it will continue down this dark path or if it will join with civilized nations as a force of stability and peace.”