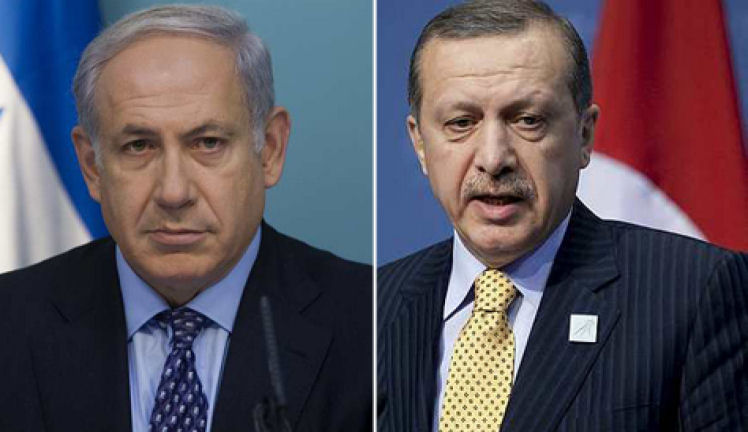 Sixteen Palestinians were killed on Friday after Israeli soldiers opened fire on some violent demonstrators.

Sixteen Palestinians were killed on Friday after Israeli soldiers opened fire on some violent demonstrators.

President Erdogan accused Mr Netanyahu of being "a terrorist" on Sunday.

It came after Mr Netanyahu rejected Ankara's "moral lessons" and accused Turkey of indiscriminately bombing civilians in its actions abroad.

"The most moral army in the world will not be lectured to on morality from someone who for years has been bombing civilians indiscriminately," the Israeli leader said on Twitter.

"Apparently this is how they mark April 1 in Ankara," he added, in reference to April's Fools Day.

He has previously called Mr Erdogan someone who "bombs Kurdish villagers" in a reference to Turkey's military operations in the Afrin area of Syria.

Mr Erdogan had earlier labelled the Israeli response on Friday an "inhumane attack".

"Hey Netanyahu! You are occupier. And it is as an occupier that are you are on those lands. At the same time, you are a terrorist," Mr Erdogan said in a televised address on Sunday.

The escalating war of words comes amid growing international criticism of the Israeli military response.

What happened on Friday?

Clashes broke out after thousands of Palestinians marched to the border at the start of a six-week protest, dubbed the Great March of Return.

The demonstration comes ahead of the 70th anniversary of the founding of Israel and the exodus of many Arabs - which Palestinians refer to as the "Nakba" (Catastrophe).

Although most protesters stayed in the encampments, some groups of youths ignored organisers' calls to stay away from the fence and headed closer to Israeli positions.

The Israel Defence Forces (IDF) said troops fired "towards the main instigators" during rioting in which petrol bombs and stones were thrown.

With 16 fatalities, Friday was the single deadliest day in the Israel-Palestine conflict since the 2014 Gaza war.

Israeli military Gen Ronen Manelis told journalists on Saturday that Hamas - the militant group that controls Gaza - was using protests as a cover for launching attacks on Israel.

Israel's ambassador to the UN, Danny Danon, also blamed the bloodshed on the militant group.

The country has rejected calls from international leaders, including UN Secretary-General Antonio Guterres, for an independent investigation into the violence.