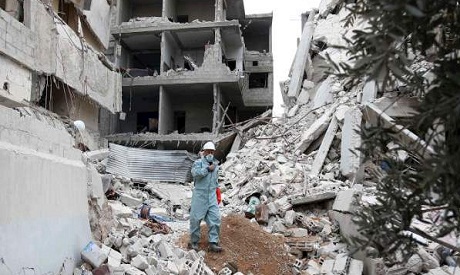 Syrian government forces launched a ground assault on the edge of the rebel-held eastern Ghouta enclave on Wednesday, seeking to gain territory despite a Russian plan for five-hour daily ceasefires, a war monitor and sources on both sides said.

Syrian civil defence volunteer walking through the rubble of a destroyed building in Haza in the besieged Eastern Ghouta region. (AFP)

Syrian government forces launched a ground assault on the edge of the rebel-held eastern Ghouta enclave on Wednesday, seeking to gain territory despite a Russian plan for five-hour daily ceasefires, a war monitor and sources on both sides said.

Hundreds of people have died in 11 days of bombing of the eastern Ghouta, a swathe of towns and farms outside Damascus that is the last major rebel-controlled area near the capital.

The onslaught has been one of the fiercest of Syria's civil war, now entering its eighth year.

The U.N. Security Council, including President Bashar al-Assad's strongest ally Russia, passed a resolution on Saturday calling for a 30-day countrywide ceasefire. But the measure has not taken effect, with Moscow and Damascus saying they are battling members of terrorist groups excluded from the truce.

Russia has instead called for daily five-hour local ceasefires to establish what it calls a humanitarian corridor so aid can enter the enclave and civilians and wounded can leave.

The first such truce took place on Tuesday but quickly collapsed when bombing and shelling resumed after a short lull.

There were no air strikes during Wednesday's five-hour ceasefire, but heavy bombardment resumed in the afternoon, the Syrian Observatory for Human Rights monitoring group reported.

There has been no sign of aid deliveries to the besieged area.

President Vladimir Putin said that Russia had managed to evacuate "quite a big group" of civilians and that Turkish President Tayyip Erdogan had helped broker the evacuation. He did not say when the civilians had managed to leave.

State-run Anadolu news agency quoted Turkish presidential spokesman Ibrahim Kalin as saying Erdogan had asked for the evacuation of around 700 people from eastern Ghouta a month ago. Kalin said Russia told Turkey the civilians had been taken to southern Damascus a week later, despite Erdogan's request for them to receive treatment in Turkey.

The Observatory said it could not confirm the evacuation.

Moscow and Damascus have accused rebels of shelling the corridor to prevent people leaving. Rebels deny this, and say people will not depart eastern Ghouta because they fear the government.

Wednesday's ground assault targeted the Hawsh al-Dawahra area at the eastern edge of the enclave.

The Observatory reported advances by the government forces in the area, describing it as the resumption of an assault that first began on Feb. 25. It said rebels had inflicted heavy losses on government forces.

An official with one of the rebel groups in eastern Ghouta said fighters were battling to repel an attempted incursion, and characterized the battle as "back and forth".

A commander in the military alliance that backs Assad said an elite unit of the Syrian army, the Tiger Force, was taking part in the assault and advances had been made.

France's foreign ministry called on Russia and Iran, Assad's other military ally, to exert "maximum pressure" on the Syrian government to implement the 30-day ceasefire.

But with no sign of decisive international pressure to stop the attack, eastern Ghouta appears on course to eventually meet the same fate as other areas won back by the government in lengthy, punishing assaults, where rebels and civilians who oppose Assad were finally evacuated in negotiated withdrawals.

Damascus appears to be applying tried and tested military means, combining air strikes and bombardment with ground assaults, as it did to recapture eastern Aleppo in 2016.

A senior Western diplomat said Russia appeared intent on a repeat of Aleppo in eastern Ghouta by evacuating the area and then killing "the terrorists even if it's not just Nusra", a reference to a jihadist group with al Qaeda links.

A senior U.S. general on Tuesday accused Moscow of acting as "both arsonist and firefighter" by failing to rein in Assad.

Diplomatic sources have said the chemical weapons watchdog, the Organisation for the Prohibition of Chemical Weapons, opened an investigation into attacks in eastern Ghouta to determine whether banned munitions were used.

The United States says it has evidence Syrian forces have used chlorine, which is permitted for civilian purposes but banned as a weapon, in attacks in eastern Ghouta and elsewhere.

U.S. disarmament ambassador Robert Wood said on Wednesday that Russia has violated its duty to guarantee the destruction of Syria's chemical weapons stockpile and prevent the Assad government from using poison gas.

Syria agreed to give up its stockpile of poison gas and join the international chemical weapons ban in 2013 under a Russian-brokered deal that averted U.S. retaliatory air strikes after a nerve gas attack killed hundreds of people in Ghouta.

Washington accused Damascus last year of again using nerve gas and carried out a round of air strikes as punishment.

U.N. political affairs chief Jeffrey Feltman told the Security Council on Wednesday the scale of attacks by the Syrian government against eastern Ghouta “cannot be justified on the basis of targeting Jabhat al Nusra fighters.”

“The air strikes, shelling, and ground offensives continue. There are even reports of yet another chlorine gas attack. What we need is implementation of 2401, and that is not happening,” Feltman said.

Lavrov said militants entrenched in eastern Ghouta were blocking aid and the evacuation of people who want to leave. Moscow would continue to support the Syrian army in totally defeating the "terrorist threat", Lavrov told the U.N. Human Rights Council in Geneva.

Rebels have intensified shelling of nearby government-held Damascus. A medical official in the capital said on Monday 36 people had been killed in four days. Damascus and Moscow say the campaign in eastern Ghouta is needed to halt such shelling.

The multi-sided Syrian war has killed hundreds of thousands of people and driven half of the pre-war population of 23 million from their homes. Fighting has escalated on several fronts this year, with the collapse of Islamic State giving rise to conflict between other Syrian and foreign parties.

As Assad has pressed the offensive against eastern Ghouta, Turkey has launched an incursion against Kurdish fighters in the northwestern Afrin region.