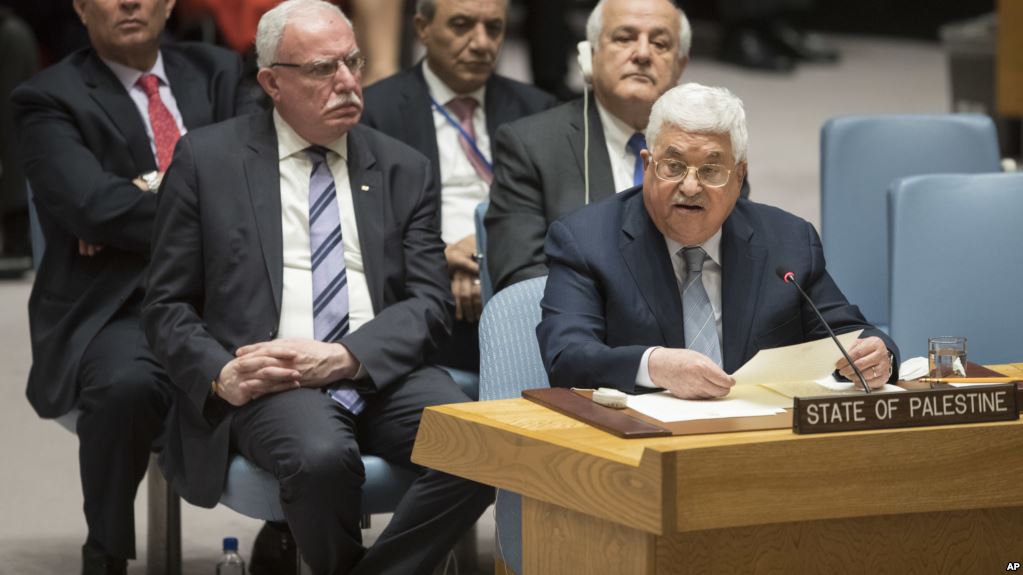 In a rare address to the UN Security Council, he said the situation was "no longer bearable" for Palestinians.

Israel's ambassador however said direct negotiations were the only way forward.

Mr Abbas previously called the declaration the "slap of the century", saying the Palestinians would no longer accept US mediation.

The issue of Jerusalem goes to the heart of the Israeli-Palestinian conflict. Palestinians seek East Jerusalem, occupied by Israel in the 1967 Middle East war, as the capital of a future Palestinian state. Israel considers the whole of Jerusalem as its indivisible capital.

'Part of the problem'

Mr Abbas told the Security Council that "to solve the Palestine question... it is essential to establish a multilateral international mechanism".

He blamed the deadlock in the peace process on the US declaration on Jerusalem, which he said violated international law, and on what he called Israel's "illegal activities" in the occupied territories.

Such a conference would mark a departure from UN-backed direct on-off negotiations that have taken place between Israel and the Palestinians over the past 25 years.

The last round broke down amid acrimony in April 2014.

"Today, once again, rather than driving just 12 minutes between Ramallah to Jerusalem he has chosen to fly 12 hours to New York to avoid the possibility of peace.

"Mr Abbas, you have made it clear with your words and with your actions that you are no longer part of the solution, you are the problem."

Accusing the Palestinian leader of incitement against Israel, Mr Danon said "after all these years of Abbas' rejectionism one thing is clear - when we extend a hand, Abbas extends a fist".

The US ambassador to the UN, Nikki Haley urged Mr Abbas to "work towards a negotiated compromise that will improve the lives of the Palestinian people".

She said her government recognised Palestinian suffering and was "offering an outstretched hand to the Palestinian people in the cause of peace.

"The US stands ready to work with the Palestinian leadership... but we will not chase after you. The choice, Mr President, is yours."