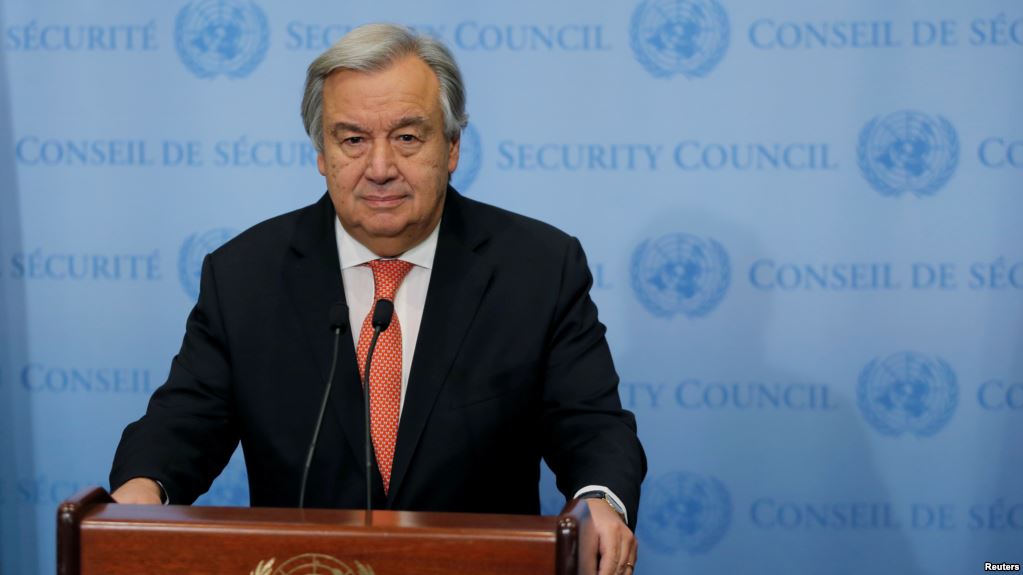 United Nations Secretary-General Antonio Guterres said Monday the global consensus for the creation of a Palestinian state alongside Israel "could be eroding," even as the humanitarian and economic situation in Gaza worsens and might make the Palestinian enclave "unlivable by 2020."

United Nations Secretary-General Antonio Guterres said Monday the global consensus for the creation of a Palestinian state alongside Israel "could be eroding," even as the humanitarian and economic situation in Gaza worsens and might make the Palestinian enclave "unlivable by 2020."

Guterres criticized Israel for its construction of settlements and expansion in the occupied West Bank, including East Jerusalem, saying they are illegal under U.N. resolutions and international law.

"It is a major obstacle to peace and it must be halted and reversed," he told the U.N. Committee on the Exercise of the Inalienable Rights of the Palestinian People, adding that "violence and incitement continue to fuel a climate of fear and mistrust."

The secretary-general reiterated his stance that both Israel and an eventual Palestinian state could claim Jerusalem as their capital, but did not comment on U.S. President Donald Trump's announced intention to move the U.S. embassy in Israel from Tel Aviv to Jerusalem by the end of 2019.

"Gaza remains squeezed by crippling closures and a state of constant humanitarian emergency," he said. "Two million Palestinians are struggling everyday with crumbling infrastructure, an electricity crisis, a lack of basic services, chronic unemployment and a paralyzed economy. All of this is taking place amid an unfolding environmental disaster."

Guterres said he is "extremely concerned" about funding for the United Nations Relief and Works Agency for Palestine Refugees, an agency that is chiefly funded by voluntary contributions from U.N. member states.

In 2016, the United States contributed $355 million to the UNRWA. But this year, the U.S. has significantly cut its assistance, announcing a $60 million contribution. Trump announced the cuts to UNRWA’s budget after the U.N. General Assembly overwhelmingly voted to condemn his decision to recognize Jerusalem as the capital of Israel.

Monday, the U.N. chief said he fears the latest shortfall in funding the agency's annual budget of more than $645 million will "gravely impair the agency’s ability to deliver on its mandate and preserve critical services, such as education and health care for Palestine refugees."

Guterres said "the stability of the entire region" could be affected if more funding is not found for the relief agency, which works in the Israeli-occupied Palestinian territories and in Jordan, Syria and Lebanon.

"I appeal to the generosity of the international community not to let that happen," he said.

The secretary-general also appealed for unity among the fractious Palestinian community.

"Reconciliation is a key step in reaching the larger objective of a Palestinian state and lasting peace."