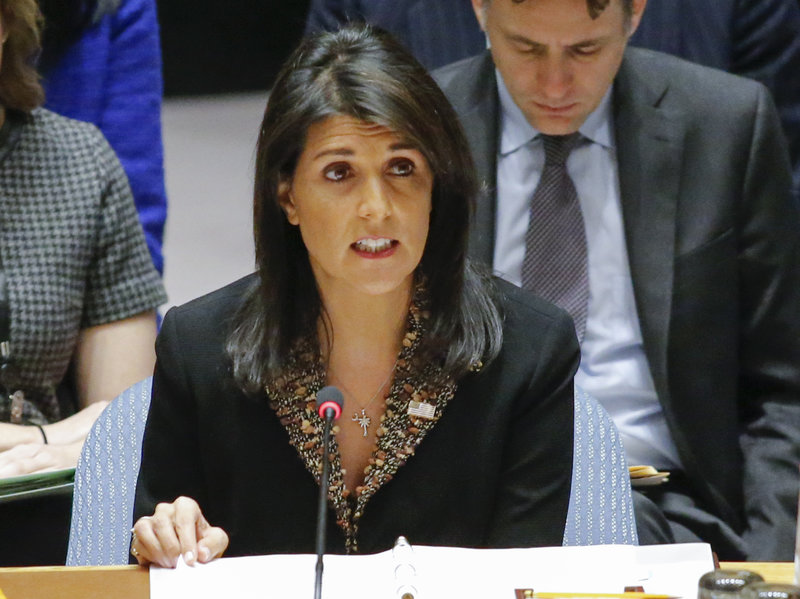 The United States blocked a Security Council resolution Monday at the United Nations that would have rejected President Trump’s recognition of Jerusalem as Israel’s capital.

The United States blocked a Security Council resolution Monday at the United Nations that would have rejected President Trump’s recognition of Jerusalem as Israel’s capital.

The draft of the resolution, called for by Egypt, did not name the United States or Trump. It expressed “deep regret at certain decisions concerning the status of Jerusalem,” and asserted that “Jerusalem is a final status issue to be resolved through negotiations.” It further declared as null and void “any decisions and actions which purport to have altered the character, status or demographic composition” of the city, and urged countries not to establish diplomatic missions in the city.

Trump’s Dec. 6 decision to recognize Jerusalem as the capital and start lengthy preparations to move the U.S. embassy from Tel Aviv has been criticized by all the Arab countries and many U.S. allies, including fellow Security Council members France and Britain.

Hours after Haley’s veto, the White House announced Vice President Pence would delay until mid-January a planned trip to the Middle East that had been scheduled to begin Tuesday. White House officials downplayed the decision, saying Pence must remain in Washington in the event his vote is needed as congressional Republicans aim to pass a major tax bill.

But amid the uproar over Trump’s decision to recognize Jerusalem, Palestinian leader Mahmoud Abbas had refused to meet with Pence. Israeli media also reported Monday that the rabbi with authority over the Western Wall declined to grant Pence permission to hold a news conference at the site. The Western Wall Heritage Foundation said it was in “discussions” in advance of Pence’s visit.

Jerusalem’s status is one of the most thorny and emotional issues in the Israeli-Palestinian conflict.

Israel captured the eastern part of Jerusalem in the Six-Day War of 1967, annexed it and has since expanded the city’s boundaries. It considers Jerusalem its undivided and eternal capital. The Palestinians desire to make East Jerusalem the capital of an eventual Palestinian state. In deference to the principle that Jerusalem’s status be determined in the final stages of negotiations — which have been frozen since 2014 — all countries have situated their embassies in Tel Aviv, a roughly 45-minute drive from Jerusalem.

“Thank you, Ambassador Haley,” he wrote. “On Hanukkah, you spoke like a Maccabi. You lit a candle of truth. You dispel the darkness. One defeated the many. Truth defeated lies. Thank you, President Trump.”

Nabil Abu Rdeneh, an adviser to Palestinian President Mahmoud Abbas, called the U.S. veto a “provocation” that he said “will not help in creating peace in the region.”

During the Security Council session, U.N. Middle East envoy Nickolay Mladenov said that since a 2016 resolution demanding a halt to settlement activity in East Jerusalem, construction had continued unabated, and there has been an increase in violence between Israelis and Palestinians. The resolution passed with 14 votes, and an abstention by the United States under the Obama administration. Mladenov warned against more unilateral actions, saying the lack of a peace proposal is “undermining moderates and empowering radicals.”

“It’s time for all countries to recognize that Jerusalem always was and always will be the capital of the Jewish people and the capital of Israel,” he said.