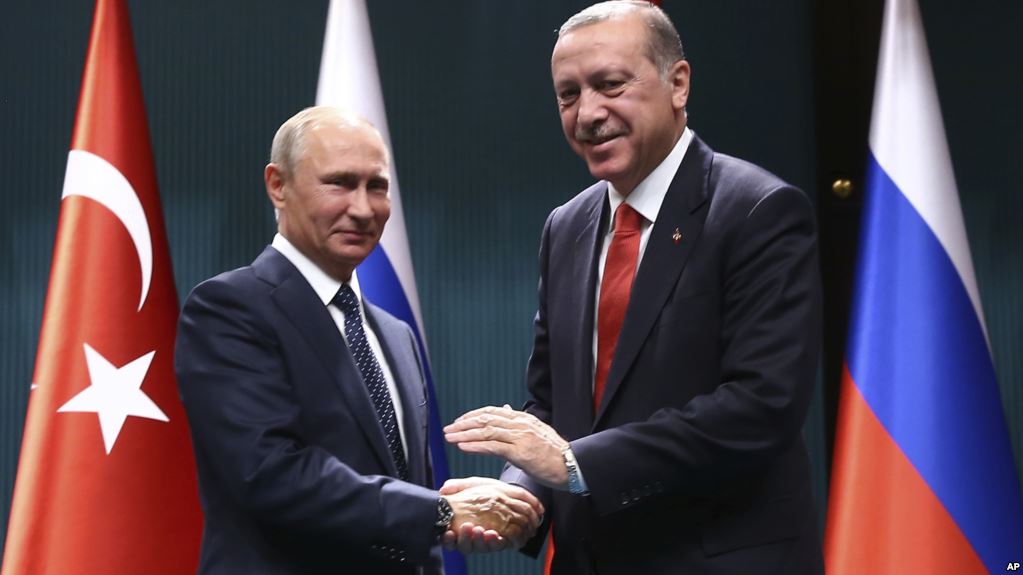 Russian President Vladimir Putin and his Turkish counterpart Recep Tayyip Erdogan on Thursday agreed to push for the creation of a "de-escalation" zone in Syria's key northern province of Idlib to help end the civil war.

Russian President Vladimir Putin and his Turkish counterpart Recep Tayyip Erdogan on Thursday agreed to push for the creation of a "de-escalation" zone in Syria's key northern province of Idlib to help end the civil war.

Erdogan said after talks in Ankara the pair agreed to "pursue more intensely" the implementation of a de-escalation zone in Idlib, which currently is under jihadist control.

The agreement is seen as a key step toward ending the civil war and ushering in the start of a peace process.

"All conditions are now created to stop the war in the Syria," Putin declared at the joint press conference.

According to reports, Erdogan raised concerns with Putin over the numbers of civilians being killed by the Russian bombing in Syria. Ankara and Moscow back rival sides in the Syrian civil war. Relations were plunged into a deep freeze following the 2015 downing of a Russian bomber by a Turkish jets. However, relations have recovered since rapprochement efforts began last year.

But analysts warns these ties are not binding.

"There will be always be a limit as to how significant and how convergent that relationship can be," warned Sinan Ulgen, a visiting scholar at the Carnegie Institute in Brussels. "There is history, there are differences how the two countries look at regional developments. So there will always be a limit."

After several hours of talks over dinner, the two leaders underlined the importance of the deepening relationship between the two countries.

"The bilateral relations is getting stronger and stronger, and it's very pleasing to both parties. We hope they prove to be much better in the future," Erdogan said at the press conference, describing Putin as a "valuable friend."

"The meeting was a good opportunity to exchange ideas," Putin added. Both leaders described the talks as "fruitful."

The rising tensions over Iraqi Kurds' independence referendum vote also were featured in deliberations. Erdogan is taking a tough stance over the vote, fearing it could fuel secessionist demands among its own Kurdish minority.

No change on PKK??

Moscow continues to resist Ankara's calls to designate as a terrorist group the Kurdish rebel group the PKK which is fighting the Turkish state. Moscow supports the Syrian Kurdish militia YPG in its fight against Islamic State, despite Ankara accusing the group of being linked to the PKK.

"Turkish policymakers are well aware of the ambiguities of the Russia position that is the case in Russia's relationship with the PKK. That has been the case of Russia's backing of the YPG. There is no romantic expectation with Russia. It's about hard politics," according to analyst Ulgen.

But with Ankara currently continuing to have strained ties with some of its traditional western partners, in particular Washington, Erdogan appears ready to continue deepening ties with Moscow, with the implicit message to its NATO partners that Turkey always has alternatives.