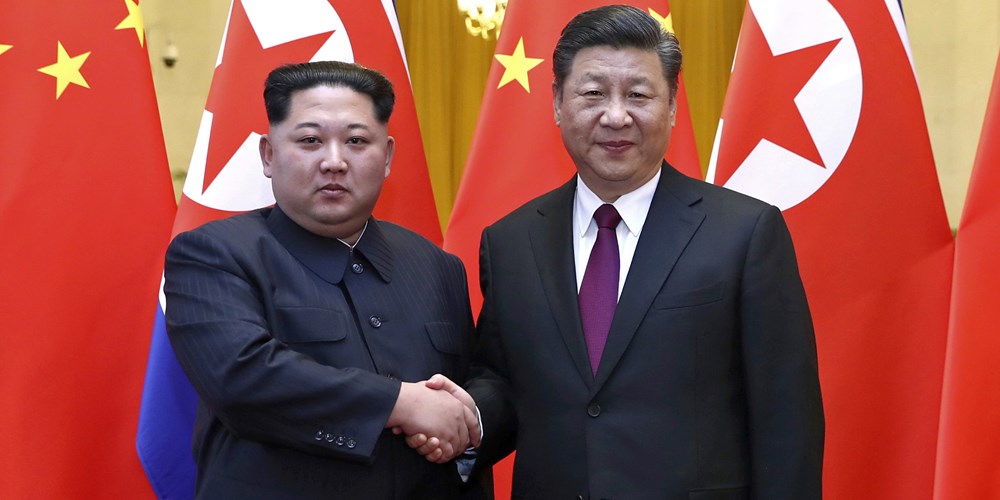 With a dose of mystery and the flair of a showman, North Korea’s young leader, Kim Jong-un, used his debut as an international statesman on Wednesday to present himself as confident, reasonable — and willing to bargain.

With a dose of mystery and the flair of a showman, North Korea’s young leader, Kim Jong-un, used his debut as an international statesman on Wednesday to present himself as confident, reasonable — and willing to bargain.

Mr. Kim’s surprise two-day visit to Beijing, his first known trip abroad since taking power, was effectively a reminder of how much he has set the agenda in the crisis over his nation’s nuclear arsenal — and of what a strong hand he has going into talks, first with President Moon Jae-in of South Korea next month and later with President Trump.

Mr. Kim has yet to say what concessions he is willing to make, or what he may demand from the United States in return. But he continued to dominate the diplomatic process, reaffirming his willingness to meet with Mr. Trump and repeating his vague commitment to the denuclearization of the Korean Peninsula in talks with President Xi Jinping of China, according to Xinhua, the Chinese state news agency.

During Mr. Trump’s first year in office, Mr. Kim raced ahead with breakthrough tests of missiles capable of hitting the United States mainland and what he claimed was a missile-ready hydrogen bomb. Then he abruptly changed course and used the Winter Olympics to seize the initiative, surprising the world with a rapprochement with the South and then an offer to meet with Mr. Trump.

Through it all, the Trump administration has been largely relegated to reacting and catching up to Mr. Kim. And so it was again this week, when Mr. Kim suddenly showed up in China on an armored train and was shown beaming next to Mr. Xi, whose cooperation has been critical to Mr. Trump’s strategy of “maximum pressure” on the North. The state media in China and North Korea announced the meeting on Wednesday, after two days of secrecy.

In images and in words, Mr. Kim and Mr. Xi signaled that they had repaired the relationship between their countries, which had soured as Mr. Kim had accelerated his nuclear program and Mr. Xi had responded by endorsing — and enforcing — more punishing sanctions proposed by the United States.

“The friendship between North Korea and China that was personally created and nurtured together by former generations of leaders from both our sides is unshakable,” Mr. Kim told Mr. Xi, according to Xinhua. Mr. Xi went out of his way to recall the warm friendship between his father, a high-ranking Communist Party official from the Mao era, and Mr. Kim’s father, Kim Jong-il, the North’s previous leader.

It is too soon to say whether the meeting marks a softening of China’s posture toward Mr. Kim or of its commitment to international sanctions against North Korea. But the visit served to highlight Beijing’s unique leverage over North Korea, even as Mr. Trump is threatening China with a trade war.

Mr. Trump can talk about maintaining “maximum pressure” on the North, but ultimately China — the North’s main trade partner — still decides what that means, because it can choose how strictly to enforce sanctions.

“China is saying to the United States and the rest of the world: Anyone who wants a deal on anything on the future of the Korean Peninsula, and certainly something which deals with nukes, don’t think you can walk around us, guys,” Kevin Rudd, a former Australian prime minister who is on good terms with the Chinese leadership, said in Hong Kong on Wednesday.

Bruce Klingner, a former Korea analyst at the C.I.A. who is now at the Heritage Foundation in Washington, said China had been bypassed by the diplomatic outreach that resulted in Mr. Trump’s agreement to meet with Mr. Kim. “Beijing has been on the sidelines of North Korea’s recent charm offensive and likely saw it necessary to finally invite Kim for a summit to get a readout of the upcoming diplomatic meetings and to be seen as a major player,” he said.

The Chinese government said it had briefed the White House on Mr. Kim’s visit, adding that Mr. Xi had sent a personal message to Mr. Trump.

On Wednesday morning, Mr. Trump expressed optimism on Twitter about the potential for diplomatic success, saying there was “a good chance” that Mr. Kim would “do what is right for his people and for humanity.”

At her daily briefing, Sarah Huckabee Sanders, the White House press secretary, offered no concern about Mr. Kim’s visit to Beijing but declined to disclose the thrust of Mr. Xi’s message. “We feel like we’ve made significant progress and we’re going to continue moving forward in this process,” she said.

But there was little in the public accounts of Mr. Xi’s discussions with Mr. Kim to support such a positive assessment. Although Xinhua quoted Mr. Kim as saying he was open to talks with Mr. Trump and committed to denuclearization, North Korea’s own state media made no mention of either.

Xinhua also quoted Mr. Kim as proposing “phased, synchronized measures” by South Korea and the United States — a phrase that suggests a desire to negotiate a gradual drawdown of his arsenal, but which also echoes the North’s position in past talks that dragged on and ultimately failed. One major difference between then and now is that North Korea has a far more advanced nuclear arsenal.

Mr. Trump’s incoming national security adviser, John R. Bolton, meanwhile, has expressed little patience for extended negotiations. He has said that North Korea should be asked to park its nuclear arsenal at the Oak Ridge nuclear facility in Tennessee.

Some analysts in Washington saw Mr. Kim’s visit to Beijing as a masterstroke that softened his international image as a rogue figure and made him look as if he genuinely wants a peaceful resolution to the conflict, potentially complicating Mr. Trump’s task in their upcoming meeting.

“You’re building this momentum, looking reasonable, looking willing to denuclearize,” said Sue Mi Terry, a Korea scholar at the Center for Strategic and International Studies, referring to the North Koreans. All of which makes it harder for Mr. Trump to blame the North Koreans if talks do not yield a breakthrough. “If we don’t play ball, with this hawkish team in place with Bolton and so on, at least perception-wise we look like we’re the problem,” she said.

If China decides to soften its stance on sanctions and act as North Korea’s protector, Mr. Kim will enter the talks in a considerably stronger position than he otherwise would have.

“It is very unlikely that Kim Jong-un consulted with the Chinese before offering to meet Trump,” said Sergey Radchenko, a professor of international relations at Cardiff University in Wales. “This in itself was a rebellious affront to the Chinese leadership. But by doing this, Kim immeasurably strengthened his negotiating position vis-à-vis the Chinese. He came to Beijing not as a supplicant but as an equal.”

Victor Cha, who was at one point Mr. Trump’s choice for ambassador to South Korea until the decision was abandoned, said that besides the possibility of a reconciliation between Beijing and Pyongyang, “the most potentially intriguing element of this” is that Mr. Kim traveled with his entire entourage out of the country. “Shows he’s not worried about leaving the palace vacant and vulnerable to some coup and that he will go abroad,” Mr. Cha said.

Many analysts said they believed China had initiated the visit, essentially telling Mr. Kim that he could no longer afford to be cavalier about his bigger, richer neighbor, and telegraphing to Mr. Trump that America could pay heavily for keeping China on the outside.

Beneath the new bonhomie in the official accounts of Mr. Kim’s trip, the edgy nature of the seven-decade-old China-North Korea relationship was still apparent.

No agreements between the two leaders were announced, even on basic issues. Mr. Xi, in his public comments, made no reference to Mr. Kim’s expected meeting with Mr. Trump, an omission that may have reflected Mr. Xi’s displeasure at being left on the sidelines.

There was also no public comment in Beijing about what Mr. Kim was planning to offer Mr. Trump or what role China would play as the talks approached, questions of the utmost importance to China.

While China supports the international effort to rid North Korea of nuclear weapons, it has also been careful not to press the North hard enough to risk a collapse of the Kim regime, which could potentially lead to a united Korean Peninsula, under an American security umbrella, on China’s border.

Some analysts said Mr. Kim was repeating a pattern set by his father, Kim Jong-il, who visited China before his 2000 summit meeting with South Korea’s then-president, Kim Dae-jung. Kim Jong-il was then about six years into his tenure as North Korea’s leader, just as his son is now.

“Now six years into his own reign, Kim III seeks to play the role of the proactive, peace-seeking statesman,” said Lee Sung-yoon, a professor at the Fletcher School of Law and Diplomacy at Tufts University.

He may hope to get Mr. Trump to settle for “another faulty, open-ended, non-biting nuclear deal” that would make it “politically near-impossible for the U.S. to talk about, let alone implement, a pre-emptive strike, John Bolton at the head of the National Security Council notwithstanding,” Mr. Lee said.