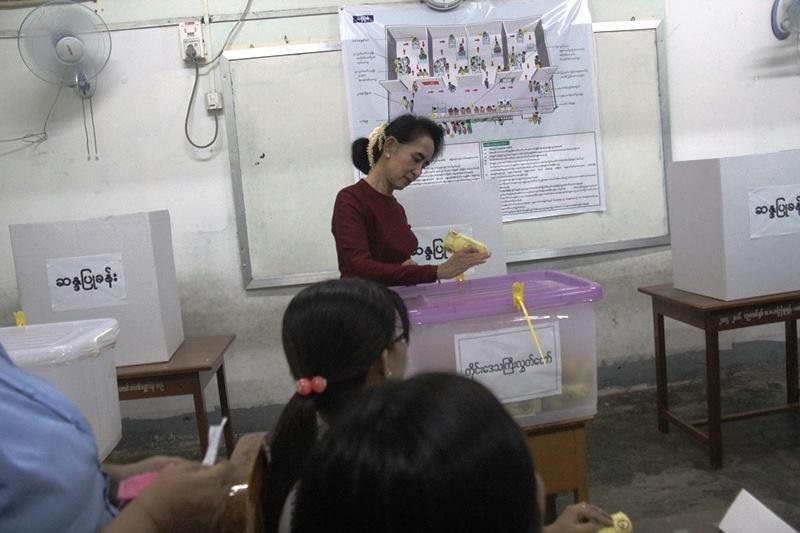 Voting unfolded smoothly in Myanmar on Sunday with no reports of violence to puncture a mood of jubilation marking the Southeast Asian nation's first free nationwide election in 25 years, its biggest stride yet in a journey to democracy from dictatorship.

Voting unfolded smoothly in Myanmar on Sunday with no reports of violence to puncture a mood of jubilation marking the Southeast Asian nation's first free nationwide election in 25 years, its biggest stride yet in a journey to democracy from dictatorship.

The party of opposition leader Aung San Suu Kyi is expected to win the largest share of votes cast by an electorate of about 30 million, who chose from among thousands of candidates standing for parliament and regional assemblies.

But a legacy of military rule means she cannot become president after the election, even if her National League for Democracy (NLD) wins a landslide.

As counting began across the country, early indications from observers were that voting was mostly trouble-free and there were only isolated reports of irregularities.

"From the dozens of people we have spoken to since 6 a.m. today, everybody feels they have been able to vote for whoever they wanted to in security and safety," said Durudee Sirichanya, an international observer from the Secretariat of the Association of Southeast Asian Nations (ASEAN).

Concern arose about the fairness of the election after activists estimated that up to 4 million people, mostly citizens working abroad, may be unable to cast a ballot.

On the eve of the poll, the NLD said a suspiciously large number of extra voting tickets had been issued in some areas, with one family in Yangon getting 38.

Religious tension, fanned by Buddhist nationalists whose actions have intimidated Myanmar's Muslim minority, marred the election campaign. Among those excluded from voting were around a million Rohingya Muslims who are effectively stateless in their own land.

Still, there was excitement among voters about the first general election since a quasi-civilian government replaced military rule in 2011, which is widely regarded as a referendum on the country's unsteady reform process.

"I've done my bit for change, for the emergence of democracy," said 55-year-old former teacher Daw Myint after casting her vote for the NLD in Yangon.

Suu Kyi's car inched through a scrum of news photographers outside the Yangon polling station where the 70-year-old Nobel peace laureate came to vote. She was stony-faced as bodyguards shouted at people to move aside.

Most of the well-wishers gathered there were lucky to get more than a glimpse of the garland in her hair. A cry of "Victory! Victory!" went up from the crowd as she went inside.

Many voters voiced doubts the military would accept the outcome of the vote if Suu Kyi's party is victorious.

But in the capital, Naypyitaw, military Commander-in-Chief Min Aung Hlaing said on Sunday there would be no re-run of the last free vote in 1990, when Suu Kyi won but the army ignored the result. She spent most of the next 20 years under house arrest before her release in 2010.

Asked how he would feel if the NLD won this time, Min Aung Hlaing told reporters: "If the people choose them, there is no reason we would not accept it."

Results from the election, which ended at 4 p.m. (0930 GMT) are expected to come in slowly. Officials say a clear overall picture is not expected to emerge until Tuesday morning.

Suu Kyi is barred from taking the presidency herself under a constitution written by the junta to preserve its power.

But if she wins a majority and is able to form Myanmar's first democratically elected government since the early 1960s, Suu Kyi says she will be the power behind the new president regardless of a constitution she has derided as "very silly".

Suu Kyi started the contest with a sizeable handicap: even if the vote is deemed free and fair, one-quarter of parliament's seats will still be held by unelected military officers.

To form a government and choose its own president, the NLD on its own or with allies must win more than two-thirds of all seats up for grabs. By contrast, the ruling Union Solidarity and Development Party (USDP) would need far fewer seats if it secured the backing of the military bloc in parliament.

However, many voters are expected to spurn the USDP, created by the former junta and led by former military officers, because it is associated with the brutal dictatorship that installed President Thein Sein's nominally civilian government in 2011.

An inconclusive result could thrust some of the 91 parties contesting the election, including many representing Myanmar's myriad ethnic minorities, into a king-maker role.

Even if the NLD is victorious, the military will retain significant power. It is guaranteed key ministerial positions, the constitution gives it the right to take over the government under certain circumstances, and it also has a grip on the economy through holding companies.

Until just a few years ago a pariah state, Myanmar has had little experience organizing elections and so 10,000 observers were enlisted to scrutinize the process.

Security was tight, with the army on alert and some 40,000 specially trained police watching over polling stations. Many restaurants and markets were closed in the country's usually bustling main city, Yangon.

Wa Gyi, owner of a roadside food stall, said he had been ordered to close for the day. "It's OK for us," he said. "It's our contribution to the emergence of democracy."