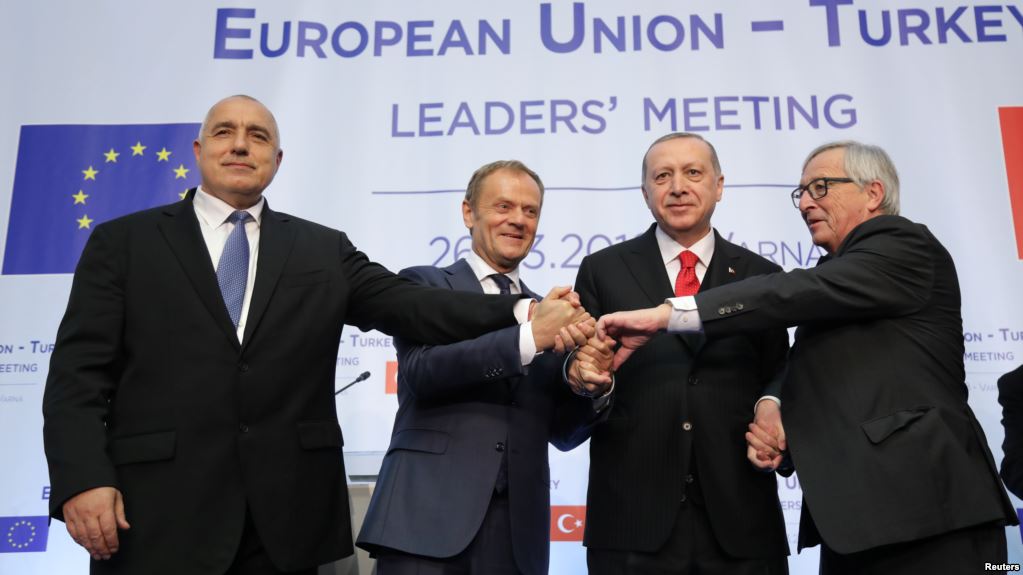 Turkish President Recep Tayyip Erdogan on Monday voiced hope that a difficult period in relations between Turkey and the European Union is now in the past.

Turkish President Recep Tayyip Erdogan on Monday voiced hope that a difficult period in relations between Turkey and the European Union is now in the past.

"I hope that we have left a tough period in the relations between Turkey and Europe behind us," Erdogan said and voiced hope that "a first step was taken here toward restoring trust with Europe."

He also said that EU membership was a "strategic goal."

Tusk said that the summit's purpose was to "continue the dialogue in really difficult circumstances."

"Our meeting today demonstrated that while our relationship is going through difficult times, in areas where we do cooperate, we cooperate well," he said.

Tusk acknowledged that no concrete compromise or solution had been achieved at the summit, but expressed hope that such would be possible in the future.

"Only progress on these issues will allow us to improve the EU-Turkey relations, including the accession process," he added.

"We reconfirm our readiness to keep up the dialogue and conversation and work together to overcome current difficulties with a view to unleashing the potential of our partnership," Tusk said.

On migration and support for refugees, Tusk said that the EU and Turkey remain very close partners.

"I would like to express our appreciation for the impressive work Turkey has been doing, and to sincerely thank Turkey and the Turkish people for hosting more than 3 million Syrian refugees these past years," he said.

"The EU has lent substantial support to improve the livelihood of these refugees, and this evening we reaffirmed the European Union's unwavering commitment to continue this support," Tusk said.

He also said that while the EU understands Turkey's need to deal effectively with its security, it is concerned that some of the methods used, undermine fundamental freedoms and the rule of law in Turkey.

"It would be a mistake for a Europe that claims to be a global power to keep Turkey outside of expansion policies," Erdogan said.

Borissov said that "I think that before the end of our EU presidency (the end of June) another EU-Turkey summit will be held."

In response to European criticism of its cross-border operation to drive out Syrian Kurdish militia from the northwestern Syrian border enclave of Afrin, Erdogan said Turkey expected European backing. He added that Turkey intended to continue with its operations as long as necessary.

"Our operations against terrorism do not just contribute to our and the Syrians' security, but to Europe's security as well," Erdogan said. "On sensitive issues such as the struggle against terrorism, we don't expect unnecessary criticism but strong support."

On Cyprus, Erdogan reiterated the Turkish Cypriot community's rights to Cyprus' resources and said the EU had "nothing to contribute" to the dispute as long as it does not maintain a "fair" approach.

The summit was held amid an array of issues that have strained ties, including a dispute between Turkey and EU member Cyprus over energy exploration in the Mediterranean.

Turkish warships have prevented a drillship from carrying out exploratory drilling on behalf of Italian company Eni southeast of Cyprus, in a move that the EU criticized.

Turkey objects to "unilateral" gas searches by ethnically divided Cyprus' Greek Cypriot-run government without the direct involvement of breakaway Turkish Cypriots. The Cyprus government says a gas search is its sovereign right and will benefit all citizens.

Erdogan pressed his European leaders to grant Turkish citizens visa liberalization to allow them to travel to certain European countries without visa restrictions.

"We told the EU side, that it needs to complete its work on this issue... This should not be turned into a political issue, it should not become an issue that shakes the trust of our people," he said.