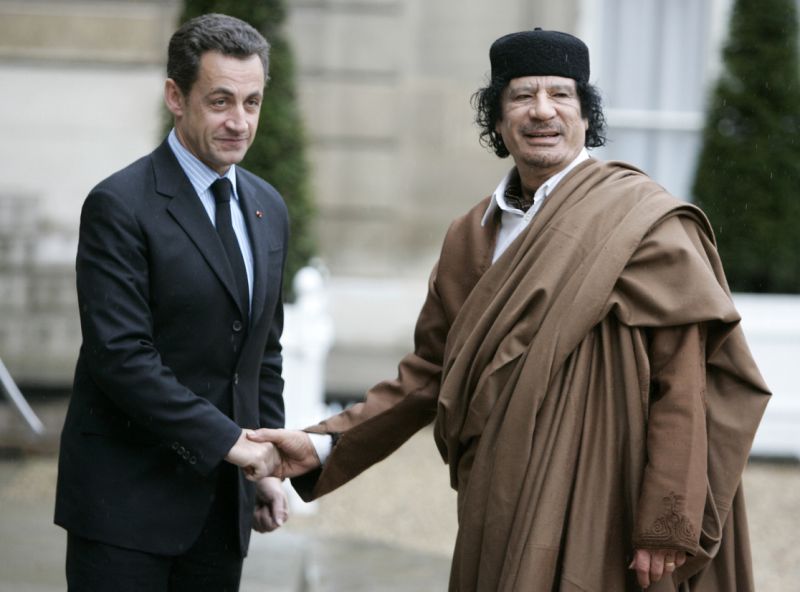 The detention of Sarkozy — France’s president between 2007 and 2012 — represented a major development in what is likely to become an explosive political scandal.

Sarkozy has repeatedly denied allegations that he took money from Gaddafi, slamming the accusations as “grotestque” and “crude ma­nipu­la­tion .”

Although an investigation began in 2013, Tuesday marked the first time authorities have questioned Sarkozy on the matter. Under French law, authorities can hold a suspect in custody for up to 48 hours before deciding whether there are sufficient grounds to launch a formal investigation.

Brice Hortefeux, who served as France’s interior minister under Sarkozy, was also questioned by police Tuesday, although not taken into custody.

If the allegations are true, it would mean Sarkozy knowingly violated France’s campaign finance laws, which in 2007 capped campaign funding at 21 million euros ($28.8 million). In the presidential election that year, Sarkozy narrowly defeated Ségolène Royal, a Socialist, in the final round of the vote.

Investigators and journalists have long scrutinized potential connections between the former center-right president and Gaddafi.

In 2012, Mediapart, a French investigative news outlet, drew on a memo allegedly from Libyan security service archives to report that Sarkozy’s campaign had received 5o million euros from Gaddafi’s government.

In November 2016, Ziad Takieddine, a French Lebanese millionaire arms dealer, told Mediapart that he personally oversaw the cash transfer of a portion of that money — 5 million euros ($6.3 million) — to Sarkozy’s chief of staff, Claude Guéant, in late 2006 and early 2007.

“I discovered things that should no longer stay hidden,” Takieddine said to Mediapart. He is also the man who first introduced Sarkozy to Gaddafi.

In 2015, French judges filed preliminary charges against Guéant in connection with the case.

In January, Alexandre Djouhri, a French businessman, was arrested at London’s Heathrow Airport in connection with the probe. He was released on bail and is fighting extradition to France.

The scandal adds to what was already known to be a complicated relationship between Sarkozy and Gaddafi.

After his victory in 2007, Sarkozy welcomed Gaddafi for a state visit. But by 2011, Sarkozy had established France as a leading player in the NATO coalition that ultimately toppled Gaddafi’s regime.