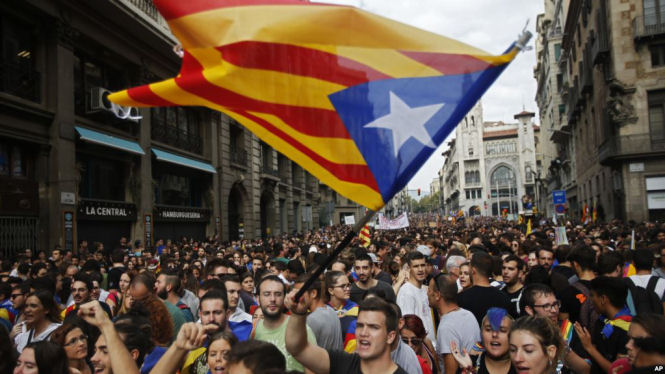 King Felipe VI of Spain stepped forcefully into the political crisis over Catalonia on Tuesday, accusing the region’s separatist leaders of “inadmissible disloyalty” and of creating “a situation of extreme gravity” that threatened the country’s constitution and unity.

Demonstrators with estelada, or Catalonia independent flag, gather in protest in front of the Spanish police station in Barcelona, Spain, October 3, 2017.(AP)

King Felipe VI of Spain stepped forcefully into the political crisis over Catalonia on Tuesday, accusing the region’s separatist leaders of “inadmissible disloyalty” and of creating “a situation of extreme gravity” that threatened the country’s constitution and unity.

The monarch’s televised address came at the close of a daylong general strike in Catalonia, as well as road blockades and a mass rally in downtown Barcelona, to protest Sunday’s police crackdown on voters as they took part in an independence referendum that had been declared illegal by Spain’s constitutional court.

The Catalan authorities “have put themselves completely on the sidelines of the law and democracy,” Felipe said. “With their irresponsible conduct, they can even put at risk the economic and social stability of Catalonia and the whole of Spain.”

The monarch had previously made clear his commitment to maintaining Spain’s unity and constitution in response to Catalan separatism. But his address on Tuesday was much more forceful, including a call on Spain’s authorities to also protect the Spanish constitution and rule of law. He stressed that separatism had left Catalan society “fractured and confronted.”

Earlier in the day, protesters blocked dozens of roads across Catalonia. Farmers used their tractors to cut off highways, and demonstrators shut down some of the main roads in Barcelona. The strike, which was backed by the regional government of Catalonia, also brought the subway system and bus network to a standstill during most of the working day.

The protests took place amid high tensions and widespread uncertainty after the highly disputed referendum, which was carried out in defiance of the central government in Madrid and which touched off clashes between the Spanish police and citizens who were trying to cast ballots.

Many private sector companies remained opened for business, in part because Spain’s two main labor unions, which have argued that any such protest must be decided and coordinated nationwide, called on their Catalan members not to take part.

What started as a strike turned into a major street demonstration in central Barcelona on Tuesday afternoon, with similar protests held in other Catalan cities. Ahead of the Barcelona rally, many shopkeepers had shuttered their establishments amid concerns about turmoil. It was, however, a peaceful and festive affair, in line with previous pro-independence rallies. “We want to fight for independence with our votes, not with weapons,” said David Maya, a 24-year old pharmacy student. “We want to show that what’s not acceptable is the behavior of the police, especially in a democratic country that is part of the European Union.”

Almost 900 people were injured on Sunday, according to the Catalan authorities. The Spanish interior minister, Juan Ignacio Zoido, said on Monday that dozens of police officers also had suffered injuries.

The union representing officers of Spain’s Guardia Civil, or military police, issued a statement on Tuesday warning that the situation for the Spanish police in Catalonia was similar to that in the Basque region in 1981, at the height of the killings by the separatist group ETA.

The police union called on politicians in Madrid “not to give public opinion the feeling that there is no state.” The Spanish authorities, the union added, should either “protect or withdraw” the officers from Catalonia.

The standoff is also escalating tensions between the central and regional governments.

Mr. Puigdemont has said that the government of Prime Minister Mariano Rajoy is returning Spain to the authoritarianism of the former dictator, Gen. Francisco Franco. At Tuesday’s Barcelona rally, many demonstrators held signs that mentioned the darkest chapters in Spanish history, including its civil war in the 1930s. Chloé Parra, 15, held a poster that read “we’re the grandchildren of those that you didn’t manage to kill.”

There was uncertainty about whether Mr. Puigdemont would unilaterally declare Catalonia’s independence, a move that would raise tensions even further.

Separatist leaders did not react immediately to the Felipe’s message on Tuesday evening, which carried an implicit warning that Madrid could take full control of Catalonia if separatists pushed their civil disobedience further. Felipe’s intervention, while unlikely to smooth relations between Madrid and Barcelona, could help rally Spain’s opposition parties around Mr. Rajoy, at a time when the Socialists have been ambivalent about how far the crackdown on Catalonia’s government should stretch.

The Catalan government announced that the independence referendum had been approved by 90 percent of almost 2.3 million voters, but it said that it would await complete returns before declaring the final result.

The preliminary figures could not be independently confirmed, and further doubt will be cast on the meaningfulness of the result because the referendum was held without an agreed census — making it unclear how many people were entitled to vote — and because most of Catalonia’s electorate did not take part. Madrid had asked potential voters to boycott the referendum.