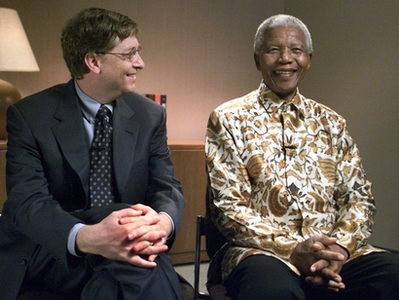 By CELEAN JACOBSON,
Associated Press Writer
QUNU, South Africa - Nelson Mandela celebrated his 90th birthday Friday by urging the wealthy to share their prosperity with the less fortunate and by saying he wished he had been able to spend more time with his family during the anti-apartheid struggle.

By CELEAN JACOBSON,
Associated Press Writer
QUNU, South Africa - Nelson Mandela celebrated his 90th birthday Friday by urging the wealthy to share their prosperity with the less fortunate and by saying he wished he had been able to spend more time with his family during the anti-apartheid struggle.
In an interview at his home in rural southeastern South Africa, the anti-apartheid icon was asked if he had a message for the world.
"There are many people in South Africa who are rich and who can share those riches with those not so fortunate who have not been able to conquer poverty," Mandela said.
Accompanied by his wife, Graca Machel, a smiling Mandela walked into his private lounge in the large home he built in Qunu, before sitting in his favorite yellow armchair and addressing a small gathering of reporters from The Associated Press and other outlets for about 15 minutes. It was his first such exchange with journalists in years.
Mandela, sounding and looking vigorous, said he was fortunate to have reached 90, but in the countryside and in the towns "poverty has gripped our people.
"If you are poor, you are not likely to live long," he said. He credited his "behavior" for his own longevity.
At one point, a granddaughter brought in a bowl of flowers and gave Mandela a birthday kiss. He was asked if he wished he had had more time with his family during a life spent fighting apartheid and then leading South Africa as its first black president.
"I am sure for many people that is their wish," he said. "I also have that wish that I spent more time (with my family). But I don't regret it."
Mandela was imprisoned for nearly three decades for his fight against apartheid.
He was released in 1990 to lead negotiations that ended decades of racist white rule. He was elected president in South Africa's first democratic elections in 1994. After serving one five-year term, he devoted himself to campaigning against poverty, illiteracy and AIDS in Africa. But he has been slowed by age in recent years, cutting back on public appearances and spending more time with his family. He often spends holidays and his birthdays in Qunu.
Wearing one of his signature patterned shirts, this one in shades of green, gold and black, he glanced pensively out a window at the start of the interview.
"This is my property. When I am here, I feel I own something," he said of the rural area 600 miles south of Johannesburg where he spent his youth. In his autobiography, he describes herding cattle in the hills around Qunu as a boy.
Soon after the interview, a group of seven or eight grandchildren crowded around Mandela's chair, sang "Happy Birthday" and kissed him. His legs were propped up on a large stool and covered with a pale yellow blanket. A pile of newspapers sat next to his chair.
The room was full of birthday presents from all over the world — a portrait, a bust, a collection of photography books — all featuring him — from well-known artists.
While Mandela was celebrating quietly in Qunu, events were taking place across the country in his honor.
Two runners holding South African flags circled Robben Island, where Mandela spent most of his 27 years in jail. At nearby Drakenstein prison, known as Victor Verster when Mandela was held their briefly at the end of his term, a prisoners' choir and a band performed for a live broadcast on state television, and prisoners who had created portraits of Mandela handed them over to Correctional Services Minister Ngconde Balfour, who was to pass them on to Mandela.
"We are saying Mr. Mandela is 90 today; he gave a lot back to the country; he united us," said a prisons' spokesman, Mark Solomons.
In Johannesburg, children celebrated with birthday cake at the offices of the foundation Mandela founded after stepping down as president in 1999, and his African National Congress unfurled giant banners featuring his image at its downtown headquarters.
Qunu, meanwhile, had spruced up for the day.
On Thursday, gardeners mowed the lawn leading up to the museum honoring Mandela, a crew added a new layer of tarmac to the road outside his house, and a school choir rehearsed a song it created especially for him.
Mandela helped raise funds so the school could build new classrooms and move out of a dilapidated mud structure.
"He has done a lot for us, specially for the school," said its principal, Mpondomise Ndzambo. "He suffered a lot trying to get this South Africa to be free and fair. I think he is a great man."