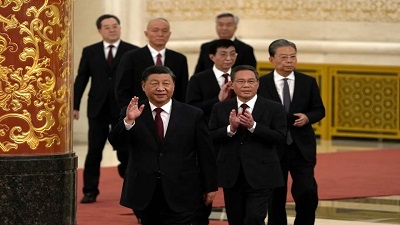 The lineup, filled with staunch Xi loyalists, made clear that Xi had not only broken with recent precedent to take on a third term at the helm of the party, but had also concentrated power at the very top of it to an extent unseen in decades.

Xi also revealed the full lineup of the 24-member Politburo, which for the first time in at least 25 years includes no women, underlining the dearth of female representation in the party’s top echelons.

The four new faces in the Politburo’s seven-member Standing Committee are all Xi’s long-time allies and proteges: Li Qiang, Cai Qi, Ding Xuexiang and Li Xi. The new lineup clears the path for him to rule for a third term with minimal internal discord – and underlines that affinity for Xi trumps all else in China’s current political landscape.

No room for moderates

The sweeping reshuffle of the Standing Committee came after the departure of key party leaders not in Xi’s inner circle – Premier Li Keqiang and Wang Yang, head of China’s top advisory body. Both have retired from the top ruling body despite being one year below the party’s unofficial retirement age of 68 and eligible to serve another term. Xi, at 69, is one year above that informal limit.

That change was made clear Saturday at the close of the Party Congress.

Events of the day were briefly interrupted by an unexpected scene when Xi’s immediate predecessor Hu Jintao, who is 79 and has been in frail health in recent years, was escorted out of the Great Hall of the People from his seat next to Xi, for reasons that were not immediately clear, though Hu appeared initially reluctant to leave.

Also noticeable for his absence from the new Standing Committee lineup announced Sunday is Hu Chunhua, 59, a vice premier seen as more within the orbit of Li Keqiang and the elder Hu.

Hu Chunhua had once been touted as a candidate for the top leadership but was not promoted from the Politburo onto its Standing Committee at the Party Congress five years ago. This time around, Hu has even dropped out of the new 24-member Politburo, in a further sign of his dimmed political future – and Xi’s unrivaled power.

Also absent is a clear successor to Xi. Standing Committee lineups prior to the Xi era have included younger members as potential successors. But with the youngest member now 60 years old, there’s no stand-out name in the mix – a potential sign Xi is not planning to step down anytime soon.

The clearing of rivals and elevation of allies makes for an “unprecedented” situation for the ruling body that will drive the world’s second largest economy, according to Chen Gang, a senior research fellow at the National University of Singapore’s East Asian Institute.

“This new lineup is not a product of power sharing or horse trading among different factions, but basically it is the result or consequence of Xi’s authority,” Chen said.

“We have entered a new era, as Xi now controls almost every aspect concerning policy making and decision making,” he said. “We’re seeing a kind of re-centralized bureaucracy in China, which will definitely impact the future China’s economic and foreign policy trajectory.”

While the lineup revealed Sunday is the top tier of the Communist Party, those selected will then go on to fill top government positions, as appointments are made in the coming months ahead of a key meeting of the country’s rubber-stamp legislature in March.

The new lineup means Xi will also gain greater control over all aspects of the Chinese state, including the economy, which is traditionally the domain of the premier, who heads its State Council.

That position is now expected to be placed in the hands of Shanghai party chief Li Qiang, a long time Xi loyalist who has been appointed to the number-two role in the party, despite the backlash that followed a chaotic two-month Covid-19 lockdown in Shanghai earlier this year.

Li’s appointment is one of several “norm-busting” elements of this year’s leadership reshuffle, according to Victor Shih, an expert on elite Chinese politics at the University of California San Diego, who noted that Li’s appointment will place a leader without any State Council experience at the head of that body – something not seen in decades.

“The Chinese economy and the State Council itself are so much more complex today compared to the 1980s. Not having that experience is going to at least initially make the job of running China’s state machinery that much more challenging,” said Shih, the author of “Coalitions of the Weak,” a book about elite politics in China over recent decades.

Meanwhile, the concentration of power “introduces a certain unhealthy dynamic in policymaking in that the people who are close to him are those who, over the years, have honed the skills of always agreeing and supporting Xi Jinping’s opinion,” he said.

Other new members include Cai, 66, party boss of Beijing and one of Xi’s most-trusted confidants; Li Xi, 66, current party chief of China’s southern economic engine Guangdong province and trusted Xi ally, who is expected to oversee the anti-corruption organization; and Ding, 60, Xi’s chief of staff and close aide.
Third term

The new power dynamics also herald a triumph for Xi’s agenda in how to drive China forward in the years to come.

“The headline story is obvious – Xi Jinping and his group are consolidating their power, the question is to what end,” said David Goodman, director of the China Studies Center at the University of Sydney.

He pointed to likely discussions among leaders in recent years over how to advance economic development, including the extent to which China has a state and private sector and the debate about immediate economic needs versus “common prosperity” – a vision to narrow China’s wealth gap.

“What I take out of this conference is the (emphasis on) common prosperity, which is now enshrined in the constitution of the party,” Goodman said.

In addition to the departure of Li and Wang, who are associated with the much diminished Hu Jintao-backed Communist Youth League faction, others who have been known for a more market-friendly stance – like finance officials Liu He, Yi Gang and Guo Shuqing – are also no longer part of the party’s elite, 205-member Central Committee. The survival of Central Committee member Wang Yi, 69, also indicates support for China’s aggressive foreign policy stance.

But despite Xi’s unprecedented hold on power, he will not necessarily have a smooth path ahead, given domestic economic challenges and strained international relations, issues Xi alluded to in an opening address to the Party Congress last Sunday.

“On the road ahead, no matter high winds, choppy waters, or even dangerous storms, the people will always be our most solid support and strongest confidence,” he said.

A Standing Committee stacked with loyalists may make the top body “an All Xi’s Men team,” but it “does not necessarily mean that Xi will become an omnipotent supreme leader and can do anything,” said Yang Zhang, an assistant professor at American University’s School of International Service.

“His unlimited power will be constrained by his limited capacity and decreasing energy as he turns older,” he said.

Meanwhile, Xi’s own associates will themselves divide into different blocs and compete for power, while Xi’s full control also means his team will be fully responsible for any policy mistake and could provoke stronger international pushback from the US-led Western countries, according to Zhang.

“All of these scenarios will make his third – and possibly fourth – term not as easy as expected,” he said.