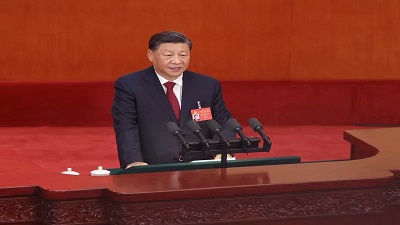 Chinese President Xi Jinping delivers a speech during the opening session of the 20th National Congress of the Communist Party of China on Sunday in Beijing. (Photo: Getty Images/Lintao Zhang)

The 20th Chinese Communist Party Congress did two key things on Saturday before it came to an end.

First, it approved a new Central Committee, the roughly 200 top party officials in China. The final committee roster had notable absences: It did not include the current and outgoing premier, Li Keqiang. Nor did it include one of the men rumored to be a potential successor to Li, Vice Premier Wang Yang.

Analysts say neither of the men are considered to be close to Xi and having them both out is a win for him, since he can stack the top echelons of party leadership with allies.

Second, the congress also approved the addition of new wording to the party charter – which acts as a guiding constitution of sorts – that cements Xi's role as the so-called core of the party, further enhancing his status and strength as leader.

"The congress calls on all party members to acquire a deep understanding of the decisive significance of establishing comrade Xi Jinping's core position on the party Central Committee and in the party as a whole," read the resolution to approve the additions.

Shortly before holding the vote to amend the party charter, Hu Jintao, the elderly former general secretary of the Communist Party, was taken off stage from the Beijing meeting hall where party representatives have been meeting over the past week.

Hu, 79, appeared confused and hesitant as two attendants escorted him from the stage where Xi and other senior party leaders sat. Officials did not provide an explanation for why he was removed.

Footage from the state broadcaster's evening news bulletin a few hours later showed Hu casting his vote for the Central Committee, which was finalized before Hu was escorted off stage.

Among other amendments, the party congress also formally approved the addition of language to the charter opposing the independence of the island of Taiwan.

China has long vowed to take control of the democratic island of Taiwan. Formalizing opposition to its independence in the party charter for the first time is a signal that China's current generation of leaders take that historical promise more seriously than ever.

At the start of the party congress meeting last week, Xi gave a speech in which he said China would take control of the island through "all measures necessary."

"We will never promise to renounce the use of force and we reserve the option of taking all measures necessary," Xi said in front of more than 2,300 carefully chosen party representatives in Beijing. "This is directly solely at interference by outside forces and a few separatists."

This past week, U.S. Secretary of State Antony Blinken warned that China had accelerated its timeline for taking control of Taiwan.

Previous U.S. military estimates had designated 2027 as the earliest date that China might be prepared to take military action against Taiwan. However, last week, Admiral Michael Gilday, chief of U.S. naval operations, warned that the U.S. military needed to be prepared for China to invade before 2024.

On Sunday, the new Central Committee will meet for the first time. The party will also announce the country's next Politburo Standing Committee, an elite body usually made up of seven leaders. Xi is expected to retain the top position there, getting a third term as leader.