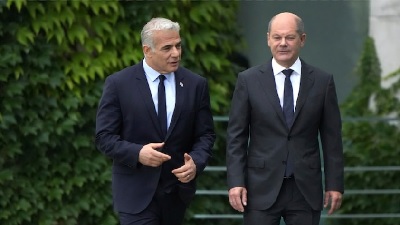 German Chancellor Olaf Scholz made clear Monday that he doesn’t expect an agreement with Iran in the immediate future to restore Tehran’s tattered nuclear deal with world powers, though he said there’s no reason for Iran not to sign up and European countries would remain “patient.”

German Chancellor Olaf Scholz made clear Monday that he doesn’t expect an agreement with Iran in the immediate future to restore Tehran’s tattered nuclear deal with world powers, though he said there’s no reason for Iran not to sign up and European countries would remain “patient.”

Scholz spoke after meeting in Berlin with Israeli Prime Minister Yair Lapid, who insisted that restoring the 2015 agreement would be “a critical mistake.” Germany, along with France, Britain, Russia and China, is still a party to the deal and involved in talks on its revival that have dragged on for over a year.

The European countries “have made proposals, and there is no reason now for Iran not to agree to these proposals, but we have to take note of the fact that this isn’t the case, so it certainly won’t happen soon, although it looked for a while like it would,” Scholz said. “We remain patient, but we also remain clear: Iran must be prevented from being able to deploy nuclear weapons.”

The German leader said that “a functioning international agreement to limit and monitor the Iranian nuclear program is the right way” to do that.

But Lapid said that “it is time to move past the failed negotiations with Iran,” which he said can’t and won’t achieve the goal of stopping Iran getting a nuclear weapon. His office said he also shared intelligence with the German government.

“Removing sanctions and pouring hundreds of billions of dollars into Iran will bring waves of terrorism, not only to the Middle East, but also across Europe,” Lapid said.

Israel, which encouraged the U.S. to withdraw from the nuclear deal in 2018, has opposed a renewed agreement between Iran and the world powers. It says lifting sanctions will allow Iran to funnel billions of dollars to hostile militant groups and says an improved deal must also address Iran’s regional military activities and support for hostile groups such as Hezbollah in Lebanon and other militias in Syria.

Speaking Monday at the Jerusalem Post Conference in New York, Israeli Defense Minister Benny Gantz said Iran has built at least 10 facilities “for mid- and long-range, precise missiles and weapons” in neighboring Syria, including one reportedly targeted by Israel in a recent airstrike.

Gantz said that Iran has produced “more and more advanced centrifuges – including at underground facilities where activities are prohibited” and called for Iran to be held accountable. His remarks couldn’t be independently verified.

The United States unilaterally pulled out of the nuclear accord in 2018 under then President Donald Trump and reimposed sanctions on Iran, prompting Tehran to start backing away from the deal’s terms.

Iran earlier this month responded to a final draft of a roadmap for parties to return to the tattered nuclear deal and bring the U.S. back on board.

A probe by the International Atomic Energy Agency into man-made uranium particles found at three undeclared sites in the country has become a key sticking point in the talks for renewing the agreement.

Iran’s hard-line president, Ebrahim Raisi, has said that the IAEA investigation into the issue must be halted in order for the 2015 deal to be renewed.

The IAEA, the U.N. nuclear watchdog agency, has for years sought answers from Iran to its questions about the particles. U.S. intelligence agencies, Western nations and the IAEA have said Iran ran an organized nuclear weapons program until 2003. Iran long has denied ever seeking nuclear weapons.

Germany, France and Britain said in a statement at the weekend that “Iran must fully and, without delay, cooperate in good faith with the IAEA.”

IAEA Director-General Rafael Grossi said at the agency’s Vienna headquarters that he hopes Iran will start cooperating “as soon as possible.”

“We are ready; we want this to happen,” he said. “We are not in the business of aggravating or creating situations. We just want this issue to be clarified, so I really hope that they will start looking into this issue in a different way.”

Asked whether he expects to face political pressure from various sides on the issue, Grossi replied that “political pressure is always there; the thing is what I do with that pressure.” He added that Iran appears to be “pushing their national interest in the way they see it.”