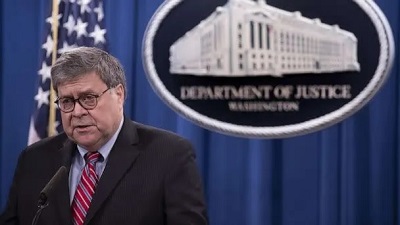 Under order from the D.C. Circuit Court of Appeals, the Department of Justice on Wednesday

Under order from the D.C. Circuit Court of Appeals, the Department of Justice on Wednesday

The department initially released a redacted version of the memo in May 2021, stemming from a Freedom of Information Act suit brought by the watchdog group the Citizens for Responsibility and Ethics in Washington (CREW). That version fully redacted more than six out of the memo's 10 pages.

On Friday, however, a panel of judges in the D.C. Circuit ordered the release of the full memo, affirming a district court decision that had found Barr and other DOJ officials were not candid in their statements about the role the memo played in their decision to not charge Trump.

DOJ officials previously told the court that the memo should be kept from the public because it involved internal department deliberations and the advice given to Barr about whether Trump should face prosecution.

But a district judge ruled that Barr was never engaged in such a process and had already made up his mind to not charge Trump.

The full memo released Wednesday outlines the rationale given to Barr from Steven Engel, the former head of DOJ's Office of Legal Counsel, and Ed O'Callaghan, the then-principal associate deputy attorney general.

Both attorneys wrote that former special counsel Mueller's report on his investigation of Trump and Russia "identifies no actions that, in our judgment, constituted obstructive acts, done with a nexus to a pending proceeding, with the corrupt intent necessary to warrant prosecution under obstruction-of-justice statutes."

Engel and O'Callaghan wrote that their determination was reached separate from considering whether Trump was already immune from prosecution because of his status as a sitting president.

While Mueller's report meticulously documented potential obstructive acts taken by Trump before and after his appointment as special counsel, Mueller has said he declined to make a determination on whether Trump committed a crime based on DOJ policies and "principles of fairness."

Both in a public statement and hours of testimony before Congress in 2019, Mueller also directly refuted claims by Trump that his report "exonerated" Trump.

"That is not what the report said," Mueller said in his testimony.

In their memo, Engel and O'Callaghan detailed multiple justifications for declining a prosecution of Trump for actions stemming from the Mueller report, which laid out 10 possible instances of obstruction of justice investigated by the special counsel's team.

They wrote that the instances in Mueller's report were not similar to "any reported case" DOJ had previously charged under obstruction-of-justice statutes and described Mueller's obstruction theory as "novel" and "unusual" because of the conclusion he reached in the first volume of his report — that evidence developed "was not sufficient to charge that any member of the Trump Campaign conspired or coordinated with representative of the Russian government to interfere in the 2016 election."

"It would be rare for federal prosecutors to bring an obstruction prosecution that did not itself arise out of a proceeding related to a separate crime," the memo states.

Engel and O'Callaghan wrote that "much of" Trump's conduct in the report instead "amounted to attempts to modify the process under which the Special Counsel investigation progressed, rather than efforts to impair or intentionally alter evidence ... that would negatively impact the special counsel's ability to obtain and develop evidence."

Their memo goes into some detail to refute certain lines of inquiry that Mueller's team pursued when investigating Trump's potentially obstructive actions.

Engel and O'Callaghan wrote that they didn't believe Trump's actions surrounding his firing FBI Director James Comey amounted to obstruction because his behavior could "readibly be explained by his desire to have the FBI Director or others in the Administration inform the public that he was not under investigation."

They wrote that they believed Trump's alleged efforts to have charges dropped against his former national security adviser Mike Flynn didn't amount to criminal obstruction. In their view, Trump's alleged statement to Comey that he would let it go "did not clearly direct a particular action in the Flynn investigation, and Comey did not react at the time as though he had received a direct order from the President."

The memo analyzed Trump's actions after learning of Mueller's appointment and when he learned that his investigators had opened a separate line of inquiry into potential obstruction of justice.

"Most of the conduct identified consists of facially lawful actions that are part of the President's constitutional responsibility to supervise the Executive Branch," Engel and O'Callaghan wrote. "And there is considerable evidence that the President took these official actions not for an illegal purpose, but rather because he believed the investigation was politically motivated and undermined his Administration's efforts to govern."

They also noted that despite Trump's actions in directing his White House counsel to fire Mueller at one juncture or asking a top aide to get Attorney General Jeff Sessions — Barr's predecessor — to narrow Mueller's investigation, "none of his requests to change the supervision of the investigation were actually carried out."

"In each instance, if the President truly wanted to cause those actions, he could have done it himself," Engel and O'Callaghan wrote. "Of course, it is true that an act may constitute an attempt or endeavor, even if unsuccessful. But the facts that the President could have given these directions himself, and did not remove any subordinate for failing to convey his directions, weigh against finding an intent to obstruct justice."

Engel and O'Callaghan did write however, that other acts taken by Trump, such as his comments related to witnesses for Mueller's investigation — condemning those who cooperated while praising those who stayed quiet — "more directly implicate the concerns of the obstruction statute."

Still, they wrote, none of the instances "indicate that the President sought to conceal evidence of criminal conduct nor is there sufficient evidence to prove beyond a reasonable doubt that he sought to provide false evidence to investigators."