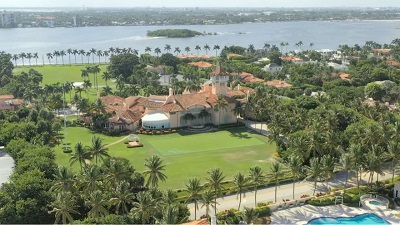 Former President Donald Trump said Monday evening that the Federal Bureau of Investigation had conducted a raid of his Florida home.

Former President Donald Trump said Monday evening that the Federal Bureau of Investigation had conducted a raid of his Florida home.

“These are dark times for our Nation, as my beautiful home, Mar-A-Lago in Palm Beach, Florida is currently under siege, raided and occupied by a large group of FBI agents,” Trump said in a statement posted to Truth Social, his social media website, calling the move “prosecutorial misconduct” and an attempt by Democrats to hurt a possible 2024 presidential bid.

The Justice Department is investigating Trump’s actions in relation to the Jan. 6, 2021, attack on the U.S. Capitol. The then president’s efforts to overturn Joe Biden’s victory in the 2020 election have also been the focus of the House Jan. 6 select committee’s investigation. In May, a federal grand jury also began investigating whether Trump had mishandled classified documents, including taking 15 boxes of materials to the Florida resort.

Former U.S. Attorney and NBC legal analyst Barb McQuade was among those who noted that the FBI would have needed a judge to agree that there was “probable cause to believe that evidence of a specific crime will be found on the premises” in order for a search warrant to have been approved.

The New York Times reported Monday evening that two people familiar with the investigation said it appeared to be centered on material Trump took with him from the White House to Mar-a-Lago after he left office. Earlier this year, the Washington Post reported that some of the records were “so sensitive they may not be able to be described in forthcoming inventory reports in an unclassified way.”

Trump’s handling of records that are subject to protection under the Presidential Records Act was under scrutiny throughout the day Monday after New York Times reporter Maggie Haberman released photos that appeared to show that Trump tried to dispose of documents by ripping them up and placing them in toilets.

Regarding the FBI search warrant executed Monday at Mar-a-Lago, the White House issued a statement to NBC News saying, “We did not have notice of the reported action and would refer you to the Justice Department for any additional information.”

Monday’s raid was first reported by Florida Politics — which said the FBI had executed a search warrant and left the premises — minutes before Trump posted his statement about it. The current FBI director, Christopher Wray, was appointed to the position by Trump in 2017.

“They even broke into my safe!” Trump said in the statement, comparing the latest events to the Watergate break-in. Trump also lamented that his opponent in the 2016 presidential race, Hillary Clinton, “was allowed to delete and acid wash 33,000 E-mails AFTER they were subpoenaed by Congress.” An FBI investigation into Clinton’s handling of the emails recommended that the former secretary of state not be charged with a crime, and an internal State Department investigation cleared her of wrongdoing.

Trump concluded by writing, “I will continue to fight for the Great American People!”