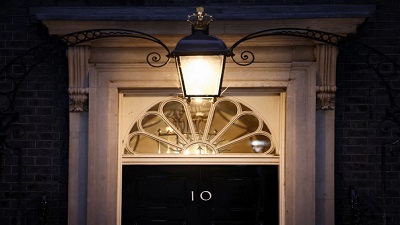 Scandal-ridden Boris Johnson announced on Thursday he would quit as British prime minister after he dramatically lost the support of his ministers and most Conservative lawmakers, but said he would stay on until his successor was chosen.

Scandal-ridden Boris Johnson announced on Thursday he would quit as British prime minister after he dramatically lost the support of his ministers and most Conservative lawmakers, but said he would stay on until his successor was chosen.

Bowing to the inevitable as more than 50 government ministers and aides quit and lawmakers said he must go, an isolated and powerless Johnson said it was clear his party wanted someone else in charge, but that his forced departure was "eccentric" and the result of "herd instinct" in parliament.

"Today I have appointed a cabinet to serve, as I will, until a new leader is in place," Johnson said outside his Downing Street office where his speech was watched by close allies and his wife Carrie.

"I know that there will be many people who are relieved and perhaps quite a few who will also be disappointed. And I want you to know how sad I am to be giving up the best job in the world. But them's the breaks," he added, making no apology for the events that forced his announcement.

His term in office was ended by scandals that included breaches of COVID-19 pandemic lockdown rules, a luxury renovation of his official residence and the appointment of a minister who had been accused of sexual misconduct.

There were cheers and applause as he began his speech, while boos rang out from some outside the gates of Downing Street.

After days of battling for his job, Johnson had been deserted by all but a handful of his closest allies after the latest in a series of scandals sapped their willingness to support him.

The Conservatives will now have to elect a new leader, a process which could take weeks or months, with details to be announced next week.

While Johnson said he would stay on, opponents and many in his own party said he should leave immediately and hand over to his deputy, Dominic Raab. Former Conservative Prime Minister John Major said it was "unwise and maybe unsustainable" for him to remain in office when he could still exert its powers.

Johnson's office said he made clear at a meeting of his new cabinet on Thursday that the government would not seek to implement new policies or make major changes of direction, and major fiscal decisions should be left for the next leader.

The Financial Times, citing lawmakers with knowledge of the plans, said the party intended to have a new prime minister in place by the time parliament returns from its summer break in early September.

Keir Starmer, leader of the main opposition Labour Party, said he would call a parliamentary confidence vote if the Conservatives did not remove Johnson at once.

Johnson is leaving behind an economy in crisis. Britons are facing the tightest squeeze on their finances in decades in the wake of the pandemic, with soaring inflation. The economy is forecast to be the weakest among major nations in 2023 apart from Russia.

His departure also follows years of internal division sparked by the narrow 2016 vote to leave the European Union, and threats to the make-up of the United Kingdom itself with demands for another Scottish independence referendum, the second in a decade.