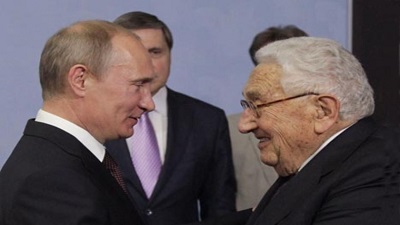 Veteran US statesman Henry Kissinger has urged the West to stop trying to inflict a crushing defeat on Russian forces in Ukraine, warning that it would have disastrous consequences for the long term stability of Europe.

Veteran US statesman Henry Kissinger has urged the West to stop trying to inflict a crushing defeat on Russian forces in Ukraine, warning that it would have disastrous consequences for the long term stability of Europe.

The former US secretary of state and architect of the Cold War rapprochement between the US and China told a gathering in Davos that it would be fatal for the West to get swept up in the mood of the moment and forget the proper place of Russia in the European balance of power.

Dr Kissinger said the war must not be allowed to drag on for much longer, and came close to calling on the West to bully Ukraine into accepting negotiations on terms that fall very far short of its current war aims.

“Negotiations need to begin in the next two months before it creates upheavals and tensions that will not be easily overcome. Ideally, the dividing line should be a return to the status quo ante. Pursuing the war beyond that point would not be about the freedom of Ukraine, but a new war against Russia itself,” he said.

He told the World Economic Forum that Russia had been an essential part of Europe for 400 years and had been the guarantor of the European balance of power structure at critical times. European leaders should not lose sight of the longer term relationship, and nor should they risk pushing Russia into a permanent alliance with China.

“I hope the Ukrainians will match the heroism they have shown with wisdom,” he said, adding with his famous sense of realpolitik that the proper role for the country is to be a neutral buffer state rather than the frontier of Europe.

The comments came amid growing signs that the Western coalition against Vladimir Putin is fraying badly as the food and energy crisis deepens, and that sanctions may have reached their limits.

“We’re seeing the worst of Europe,” said German vice-chancellor Robert Habeck in an angry outburst in Davos, accusing Hungary and other recalcitrant states of paralysing attempts by the rest of the EU to craft a full-fledged oil embargo.

Mr Habeck, who doubles as economy minister, said Germany is more or less ready to endure the shock of a total cut-off in Russian oil imports but others want to carry on as if nothing had changed. “I expect everyone to work to find a solution, and not to sit back and work on building their partnership with Putin,” he said.

Yuriy Vitrenkio, head of the Ukrainian energy consortium Naftogas, said the refuseniks are demanding exemptions from the embargo on false pretences. “What they really want is a free-ride on discounted Russian oil,” he said.

Eleven Republican senators and 57 congressmen in the US voted against the colossal $40bn aid package for Ukraine, an early sign of fragmenting cohesion in Washington.

“Putin is counting on the West to lose focus and that is our real challenge. People are as concerned, or more concerned, about the rising price of gas and groceries,” said Senator Christopher Coons.

“I’m not sure the unity will last. We may not get the next vote,” said Eric Cantor, former House Whip and a key figure in the sanctions policy against Iran.

Nobody is sure whether the US is trying to punish Russia for its aggression or whether the goal is a subtler use of policy that gives the Kremlin a “route out of sanctions” if it changes course. The fundamental divisions over the West’s war aims in Ukraine have so far been masked by an outpouring of solidarity and emotion, but these rifts are coming to the fore.

President Volodymyr Zelensky delivered his usual tour de force in a video address to the forum, saying “this is the year when we learn whether brute force will rule the world”. If it does, he added with his trademark touch, there will be no point in any more World Economic Forums in Davos.

Yet he also said Russia should be shut out of the civilised world entirely, and that all trade should stop until Russian forces are driven from Ukraine. “Sanctions should be maximum, so that Russia and every other potential aggressor that wants to wage a brutal war against its neighbour would clearly know the immediate consequences of their actions," he said.

It is doubtful whether the West can maintain a united front in pursuit of such far-reaching war aims with absolutist aims. Mr Cantor said it would require secondary sanctions against other countries, putting the West in a head on clash with China, India, and almost 60 states that refused to back a UN resolution denouncing Russia’s invasion.

India’s energy minister Shri Hardeep Puri brushed aside suggestions that his country should stop buying Russian oil. “The Europeans buy more Russian energy in an afternoon than we do in a quarter,” he said in Davos.

Mr Cantor said the US was in danger of overplaying its hand. “We have got to have multilateral support. We are already being accused of weaponising the world’s reserve currency. Even allies and friends are starting to ask, if you are using it in this way, we too could one day be subject to these sanctions,” he said.

The US Congress is split on the ultimate war aim. Senator Joe Manchin said the US should keep going until there was a clear “win” that restored all of Ukraine’s territory and led to the toppling of Vladimir Putin but other members of the Congressional delegation in Davos want a negotiated outcome.

Saudi Arabia and the Opec states have made it clear that they will not draw on their spare capacity to cover the lost Russian supply of oil, estimated at around one million barrels a day at the end of April. This makes it extremely hard to plug the gap if Europe cuts off purchases of Russian barrels.

Francisco Blanch from Bank of America said the oil market is now extremely tight. “The energy buffer is nearing a vanishing point. Crude oil inventories are down to a dangerously low point across Europe, North America, and OECD Asia. Inventories have also fallen to precarious levels for middle distillates and even gasoline as the market heads into the peak of the US driving season,” he said.

Unless there is a global recession and violent demand destruction, crude prices could soon spiral higher. “We’re not living in a dream world: we have to replace the lost oil with other oil,” said Fatih Birol, head of the International Energy Agency.

Mr Birol said that the OECD bloc of rich states are releasing 1.5m barrels a day of oil to stabilise the market, and have so far depleted 9pc of their stocks. This is before the European embargo against Russia even begins. “This winter in Europe will be tough,” he said.

Source: The Telegraph: By Ambrose Evans-Pritchard