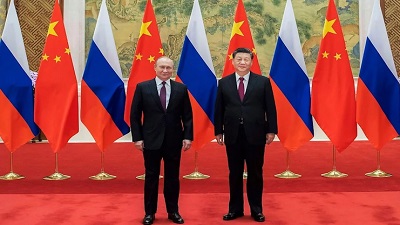 The world is at risk of splitting into two economic blocs as a “tectonic shift” puts an end to decades of globalisation.

The world is at risk of splitting into two economic blocs as a “tectonic shift” puts an end to decades of globalisation.

The warning from the IMF came as its economists slashed growth forecasts in the wake of Russia’s invasion of Ukraine. Britain’s economy was downgraded but is still set to expand considerably more quickly this year than European rivals Germany, France and Italy.

There are fears China and Russia could create a financial system to rival the West after tough sanctions were imposed on Moscow. The West has ejected Russian banks from the Swift global payments messaging system and China’s UnionPay has stepped in to help Moscow after Visa and Mastercard suspended operations in the country.

He said this “tectonic shift” would carry huge economic consequences and is a major challenge to “the rules-based framework that has governed international and economic relations for the last 75 years.”

The IMF said global growth will slow sharply from 6.1pc in 2021 to 3.6pc this year, 0.8 percentage points weaker than thought in January after the outlook “worsened significantly”.

The German, Italian and Russian economies bore the brunt of the downgrades while the UK is set to enjoy stronger growth than the eurozone.

The UK economy is expected to expand 3.7pc this year, down one percentage point on the previous forecast. While this will be much stronger than Germany, France and Italy, UK growth will slow suddenly to 1.2pc in 2023 as inflation slashes living standards and higher borrowing costs hits business investment, the IMF said.

Germany is expected to grow by a much slower 2.1pc in 2022, almost half the predicted expansion in January, while GDP in Italy will climb 2.3pc, down 1.5 percentage points. The two countries’ economies are among those most exposed to Russian gas supplies and the soaring prices squeezing households and businesses.

The IMF said EU countries were the second largest drag on its global growth forecast after the Russian economy, which is expected to contract 8.5pc.

“The war adds to the series of supply shocks that have struck the global economy in recent years,” said Mr Gourinchas.

“Like seismic waves, its effects will propagate far and wide -- through commodity markets, trade, and financial linkages. Russia is a major supplier of oil, gas, and metals, and, together with Ukraine, of wheat and corn.”

Source: The Telegraph by Tom Rees