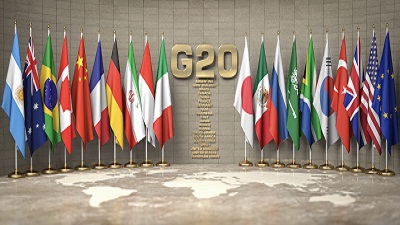 The United States and its Western allies are assessing whether Russia should remain within the Group of Twenty (G20) grouping of major economies following its invasion of Ukraine, sources involved in the discussions told Reuters on Tuesday.

The United States and its Western allies are assessing whether Russia should remain within the Group of Twenty (G20) grouping of major economies following its invasion of Ukraine, sources involved in the discussions told Reuters on Tuesday.

The likelihood that any bid to exclude Russia outright would be vetoed by others in the club - which includes China, India, Saudi Arabia and others - raised the prospect of some countries instead skipping G20 meetings this year, the sources said.

The G20 along with the smaller Group of Seven - comprising just the United States, France, Germany, Italy, Canada, Japan and Britain - is a key international platform for coordinating everything from climate change action to cross-border debt.

Russia is facing an onslaught of international sanctions led by Western nations aiming to isolate it from the global economy, including notably shutting it out of the SWIFT global bank messaging system and restricting dealings by its central bank.

"There have been discussions about whether it’s appropriate for Russia to be part of the G20," said a senior G7 source. "If Russia remains a member, it will become a less useful organization."

Asked whether U.S. President Joe Biden would move to push Russia out of the G20 when he meets with allies in Brussels this week, national security adviser Jake Sullivan told reporters at the White House Tuesday: "We believe that it cannot be business as usual for Russia in international institutions and in the international community."

However, the United States plans to consult with its allies before any other pronouncements are made, he said.

A European Union source separately confirmed the discussions about Russia's status at forthcoming meetings of the G20, whose rotating chair is currently held by Indonesia.

"It has been made very clear to Indonesia that Russia’s presence at forthcoming ministerial meetings would be highly problematic for European countries," said the source, adding there was however no clear process for excluding a country.

The G7 was expanded to a new "G8" format including Russia during a period of warmer ties in the early 2000s. But Moscow was indefinitely suspended from that club after its annexation of Crimea in 2014.

Earlier on Tuesday, Poland said it had suggested to U.S. commerce officials that it replace Russia within the G20 group and that the suggestion had received a "positive response."

"She (Raimondo) welcomed hearing Poland’s views on a number of topics, including the operation of the G20, but did not express a position on behalf of the U.S. Government with respect to the Polish G20 proposal.”

The G7 source said it was seen as unlikely that Indonesia, currently heading the G20, or members like India, Brazil, South Africa and China would agree to remove Russia from the group.

"It's impossible to remove Russia from G20" unless Moscow makes such a decision on its own, said an official of a G20 member country in Asia. "There's simply no procedure to deprive Russia of G20 membership."

If G7 countries instead were to skip this year’s G20 meetings, that could be a powerful signal to India, the source said. It has drawn the ire of some Western nations over its failure to condemn the Russian invasion and support Western measures against Russian President Vladimir Putin.

Indonesia's foreign ministry declined to comment on calls for Russia to be excluded.

Deputy central bank governor Dody Budi Waluyo on Monday said at a seminar Indonesia's position was always one of neutrality, but noting the risk of divisions over the issue said it would use its G20 leadership to try to resolve any problems.

Russia had a "strong commitment" to attend G20 meetings and other members could not forbid them from attending, he added.

Russia's status at other multilateral agencies is also being questioned.

In Geneva, World Trade Organization officials said numerous delegations there were refusing to meet their Russian counterparts in various formats.

"Many governments have raised objections to what is happening there and these objections have manifested themselves in a lack of engagement with the member concerned," WTO spokesperson Keith Rockwell said.

One source from a Western country said those not engaging with Russia at the WTO included the European Union, the United States, Canada and Britain. No confirmation from those delegations was immediately available.