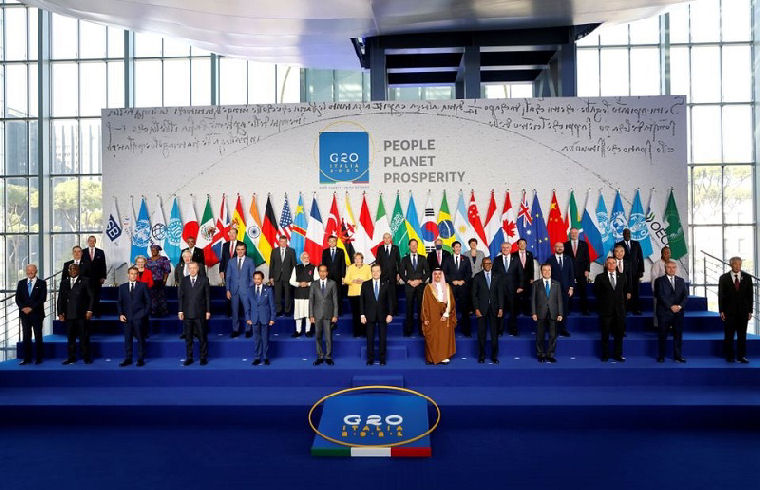 Leaders of the world's 20 biggest economies endorsed on Saturday a global minimum tax aimed at stopping big business from hiding profits in tax havens, and also agreed to get more COVID vaccines to poorer nations.

World leaders gather for the official family photograph on day one of the G20 leaders summit at the convention center of La Nuvola, in Rome. (Photo: Reuters)

Leaders of the world's 20 biggest economies endorsed on Saturday a global minimum tax aimed at stopping big business from hiding profits in tax havens, and also agreed to get more COVID vaccines to poorer nations.

Attending their first in-person summit in two years, G20 leaders broadly backed calls to extend debt relief for impoverished countries and pledged to vaccinate 70% of the world's population against COVID-19 by mid-2022.

However, with a crucial U.N. climate conference due to start in just two days, the G20 appeared to be struggling to throw its weight behind the sort of strong new measures that scientists say are needed to avert calamitous global warming.

Italy, hosting the gathering in Rome, put health and the economy at the top of the agenda for the first day of the meeting, with the more difficult climate discussions set for Sunday.

Underscoring the way the coronavirus crisis has up-ended the world, doctors in white coats and Red Cross workers joined the leaders for their traditional "family" photograph -- a tribute to the sacrifices and efforts of medics across the globe.

Addressing the opening of the meeting, being held in a steel and glass convention centre, Italian Prime Minister Mario Draghi said governments had to work together to face up to the formidable challenges facing their peoples.

"From the pandemic, to climate change, to fair and equitable taxation, going it alone is simply not an option," Draghi said.

The corporate tax deal was hailed as a evidence of renewed multilateral coordination, with major corporations facing a minimum 15% tax wherever they operate from 2023 to prevent them from shielding their profits in off-shore entities.

"This is more than just a tax deal – it's diplomacy reshaping our global economy and delivering for our people," U.S. President Joe Biden wrote on Twitter.

Like many of the other G20 leaders in Italy, Biden will fly straight to Glasgow on Sunday for the United Nations' climate summit, known as COP26, which is seen as crucial to addressing the threat of rising temperatures.

The G20 bloc, which includes Brazil, China, India, Germany and the United States, accounts for an estimated 80% of global greenhouse gas emissions, but hopes the Rome meeting might pave the way to success in Scotland have dimmed considerably.

Chinese President Xi Jinping and Russia's Vladimir Putin both decided to follow events only via video link and diplomats looking to seal a meaningful accord said both countries, as well as India, were resisting ambitious new climate goals.

British Prime Minister Boris Johnson acknowledged the G20 and COP26 talks would be difficult, but warned that without courageous action, world civilisation could collapse as swiftly as the ancient Roman empire, ushering in a new Dark Age.

"It's going to be very, very tough to get the agreement we need," he told reporters, standing next to the ruins of the Colosseum amphitheatre - a symbol of once mighty Rome.

A draft communique seen by Reuters said G20 countries will step up their efforts to limit global warming at 1.5 degrees Celsius - the level scientists have said is necessary to avoid disastrous new climate patterns. read more

The document also acknowledges that current national plans on how to curb harmful emissions will have to be strengthened, but offered little detail on how this should be done.

Additionally, the leaders are set to pledge to halt financing of overseas coal-fired power generation by the end of this year, and to "do our utmost" to stop building new coal power plants before the end of the 2030s.

Apparently relishing in-person diplomacy after months of relative isolation, the leaders held numerous meetings on the sidelines, including discussions between the United States, Britain, Germany and France on Iran's nuclear programme.

"It is great to see all of you here, after a difficult few years for the global community," Draghi said, catching the largely upbeat mood amongst those present.

Far from the conference centre, known as 'The Cloud', several thousand protesters staged a loud, but peaceful demonstration in the city centre to demand action to stem climate change.

"We are holding this protest for environmental and social issues and against the G20, which continues undaunted on a path that has almost led us to social and ecological failure," said protester Edoardo Mentrasti.