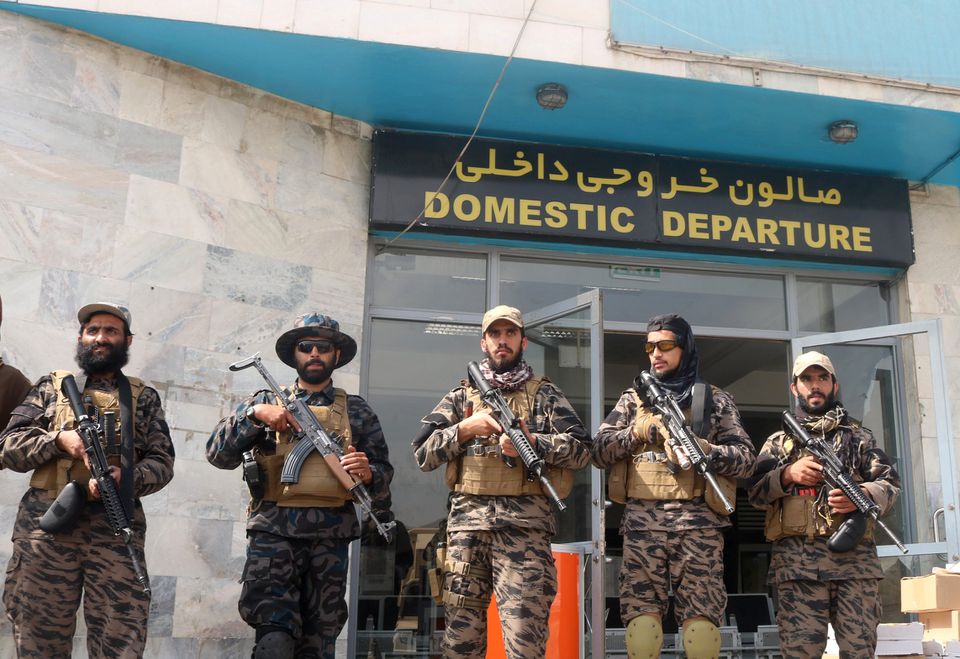 Celebratory gunfire resounded across the Afghan capital on Tuesday as the Taliban took control of the airport following the withdrawal of the last U.S. troops, marking the end of a 20-year war that left the Islamist group stronger than it was in 2001.

Celebratory gunfire resounded across the Afghan capital on Tuesday as the Taliban took control of the airport following the withdrawal of the last U.S. troops, marking the end of a 20-year war that left the Islamist group stronger than it was in 2001.

Shaky video footage distributed by the Taliban showed fighters entering the airport after the last U.S. troops flew out on a C-17 aircraft a minute before midnight, ending a hasty and humiliating exit for Washington and its NATO allies.

"It is a historical day and a historical moment," Taliban spokesman Zabihullah Mujahid told a news conference at the airport after the departure. "We are proud of these moments, that we liberated our country from a great power."

An image from the Pentagon taken with night-vision optics showed the last U.S. soldier to step aboard the final evacuation flight out of Kabul - Major General Chris Donahue, commander of the 82nd Airborne Division.

Although it succeeded in driving the Taliban from power and stopped Afghanistan being used by al Qaeda as a base to attack the United States, it ended with the hardline militants controlling more territory than when they last ruled.

The Taliban brutally enforced their strict interpretation of Islamic law from 1996 to 2001, not least by oppressing women, and the world is watching now to see if the movement will form a more moderate and inclusive government in the months ahead.

Long lines formed in Kabul on Tuesday outside banks shuttered since the fall of the capital as people tried to get money to pay for increasingly expensive food.

There was a mixture of triumph and elation on the one side as the Taliban celebrated their victory, and fear on the other.

"I had to go to the bank with my mother but when I went, the Taliban (were) beating women with sticks,” said a 22-year-old woman who spoke on condition of anonymity because she feared for her safety.

She said the attack occurred among a crowd outside a branch of the Azizi Bank next to the Kabul Star Hotel in the centre of the capital.

"It’s the first time I’ve seen something like that and it really frightened me."

More than 123,000 people were evacuated from Kabul in a massive but chaotic airlift by the United States and its allies over the past two weeks, but many of those who helped Western nations during the war were left behind.

A contingent of Americans, estimated by U.S. Secretary of State Antony Blinken at fewer than 200, and possibly closer to 100, wanted to leave but were unable to get on the last flights.

British Foreign Secretary Dominic Raab put the number of UK nationals in Afghanistan in the low hundreds, following the evacuation of some 5,000.

General Frank McKenzie, commander of the U.S. Central Command, told a Pentagon briefing that the chief U.S. diplomat in Afghanistan, Ross Wilson, was on the last C-17 flight out.

"There's a lot of heartbreak associated with this departure," McKenzie told reporters. "We did not get everybody out that we wanted to get out. But I think if we'd stayed another 10 days, we wouldn't have gotten everybody out."

The departing U.S. troops destroyed more than 70 aircraft and dozens of armoured vehicles. They also disabled air defences that had thwarted an attempted Islamic State rocket attack on the eve of their departure.

As the Taliban watched U.S. troops leave Kabul on Monday night, at least seven of their fighters were killed in clashes in the Panjshir valley north of the capital, two members of the main anti-Taliban opposition group said.

Several thousand anti-Taliban fighters, from local militias as well as remnants of army and special forces units, have gathered in the valley under the command of regional leader Ahmad Massoud.

"They can inspect all they want," he told CNN. "They can look at them. They can walk around. They can't fly. They can't operate them..."

But he said that "the threat environment" remains high.

"We're obviously concerned about the potential for Taliban retribution going forward and we certainly, we saw it ourselves, are mindful of the threat that ISIS-K continues to pose inside Afghanistan."

ISIS-K is the Islamic State affiliate that claimed responsibility for a suicide bombing outside Kabul airport on Thursday that killed 13 U.S. service members and scores of Afghan civilians.

U.S. President Joe Biden defended his decision to stick to Tuesday's withdrawal deadline. He said the world would hold the Taliban to their commitment to allow safe passage for those wanting to leave Afghanistan.

Biden has said the United States long ago achieved the objectives it set in 2001, when it ousted the Taliban for harbouring al Qaeda militants who masterminded the Sept. 11 attacks.

But he has drawn heavy criticism from Republicans and some fellow Democrats for his actions since the Taliban took over Kabul this month after a lightning advance and the collapse of the U.S.-backed government.

Blinken said the United States was prepared to work with the new Taliban government if it did not carry out reprisals against opponents.