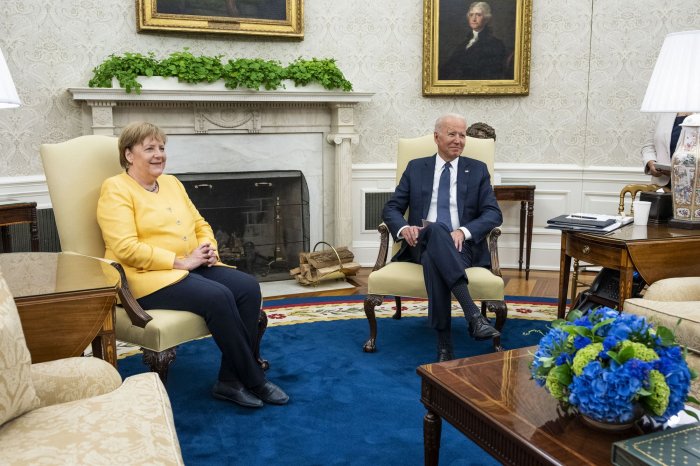 Mr Biden said he had voiced concern to Mrs Merkel over a Russia-to-Germany gas pipeline, but they agreed Moscow cannot be allowed to use energy as a weapon.

The US president said the two allies also opposed anti-democratic actions by China.

Mrs Merkel, who has worked with four US presidents, is leaving office.

"We stand together and will continue to stand together to defend our eastern flank allies at Nato against Russian aggression," Mr Biden told Thursday's joint news conference with Mrs Merkel.

He acknowledged the two did not see eye to eye on the nearly complete $11bn (£8bn) Nord Stream 2 natural gas pipeline. The White House has said it will be used by Russia as leverage over Ukraine and other neighbours.

The US president also said: "We will stand up for democratic principles and human rights when we see China or any other country working to undermine free and open societies."

Despite being strong trade partners, Berlin has at times been critical of Beijing on the issue of human rights.

Mr Biden also told reporters the US had no plans "at the moment" to send troops to Haiti amid growing unrest after the assassination of its president.

Asked about ongoing protests in Cuba, Mr Biden said the "failed state" was repressing its citizens.

Both leaders emphasised the amicable nature of their hour-long meeting, with Ms Merkel referring more than once to her host as "Dear Joe".

Mr Biden told his guest: "I will miss seeing you at our summits."

Back home, Mrs Merkel's country dealt with heavy flooding that left dozens of people dead, and she expressed "sympathy" with the victims.

The German leader had a frosty relationship with Mr Biden's predecessor, Donald Trump, and occasional tension, too, with George W Bush and Barack Obama, the other two presidents her tenure has spanned.

Ms Merkel, who became chancellor in 2005, is not running again in September's elections. Her Christian Democratic Union leads opinion polls.