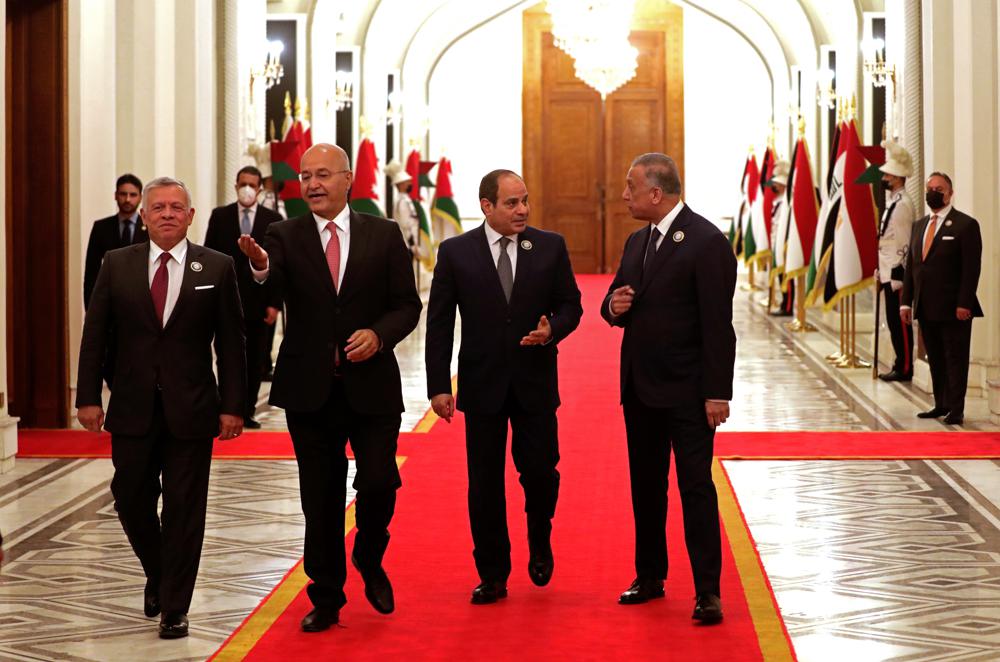 Iraq, Egypt and Jordan took a step toward deepening a regional alliance by holding tripartite talks in Baghdad on Sunday, in a first visit by an Egyptian head of state to the country in 30 years. Talks ranged from trade to Mideast crises.

Iraq, Egypt and Jordan took a step toward deepening a regional alliance by holding tripartite talks in Baghdad on Sunday, in a first visit by an Egyptian head of state to the country in 30 years. Talks ranged from trade to Mideast crises.

Abdel Fattah el-Sissi was greeted by Iraq’s President Barham Salih upon arriving Sunday morning. It marked the first time an Egyptian president paid an official visit to Iraq since the 1990s when ties between both countries were severed after Saddam Hussein invaded Kuwait.

Jordan’s King Abdullah II arrived shortly afterwards, he and el-Sissi then met with Iraqi Prime Minister Mustafa al-Kadhimi for a third round of tripartite talks. The meetings are seen largely as an attempt to neutralize Iran’s influence across the region and have been welcomed by the U.S.

Al-Kadhimi also aims to shore up regional alliances and bolster Iraq’s standing in the Middle East as a mediator capable of bringing even the staunchest of foes to the negotiating table. Baghdad recently hosted talks between Iran and Saudi Arabia focusing on the war in Yemen.

“This visit is an important message to our people that we are mutually supportive and unified to serve our people and the people of the region,” al-Kadhimi said, according to a statement from his office.

Iraqi Foreign Minister Fuad Hussein said in a press conference following the meeting that a wide range of topics had been discussed, including economic and political cooperation, large-scale industrial projects, and trade in medicine and agricultural pesticides.

The talks also covered regional issues including the Syria crisis, the conflict between Israel and the Palestinians, and the conflict in Yemen.

Ethiopia’s Grand Renaissance Dam project, which Egypt fears will imperil its water supply, was also discussed with Iraq and Jordan siding with Cairo, he added, and all three countries agreed that a political solution and the return of refugees was needed to end the Syrian crisis, said Jordan’s Foreign Minister Ayman Safadi.

“The message from the leaders is we stand together in the face of these challenges,” he said.

A statement issued after the meeting said the three sides also agreed on the importance of security and intelligence coordination to combat terrorism, drug trafficking and cybercrime.

Cooperation in the energy sector was also discussed, including the possibility of linking gas transmission networks between Iraq and Egypt through Jordan. To date, Iraq is highly reliant on Iranian gas and electricity imports to meet domestic demand.

They also highlighted the importance of re-opening borders to encourage more trade in light of the economic crises brought on by the coronavirus pandemic.

No tangible new agreements were signed on Sunday following the summit. But the event is considered an important step for Iraq in particular to moderate neighboring Iran’s sway over internal state affairs.

Political parties and militia groups friendly with Iran are entrenched within the state, its security institutions and the parliament.

“Iraq must be isolated from regional interventions” Jordan’s Foreign Minister Ayman Safadi told reporters after the meeting, in an apparent reference to Iran’s powerful influence.

Iraq has previously signed key economic and trade agreements with both Jordan and Egypt.

In November, Egypt signed 15 memoranda of understandings that spanned sectors from oil to construction and trade. Jordan imported 10,000 barrels a day of oil from Iraq, but this was halted due to

coronavirus restrictions. The two countries were also in talks to build an oil export pipeline from Basra to the port of Aqaba.