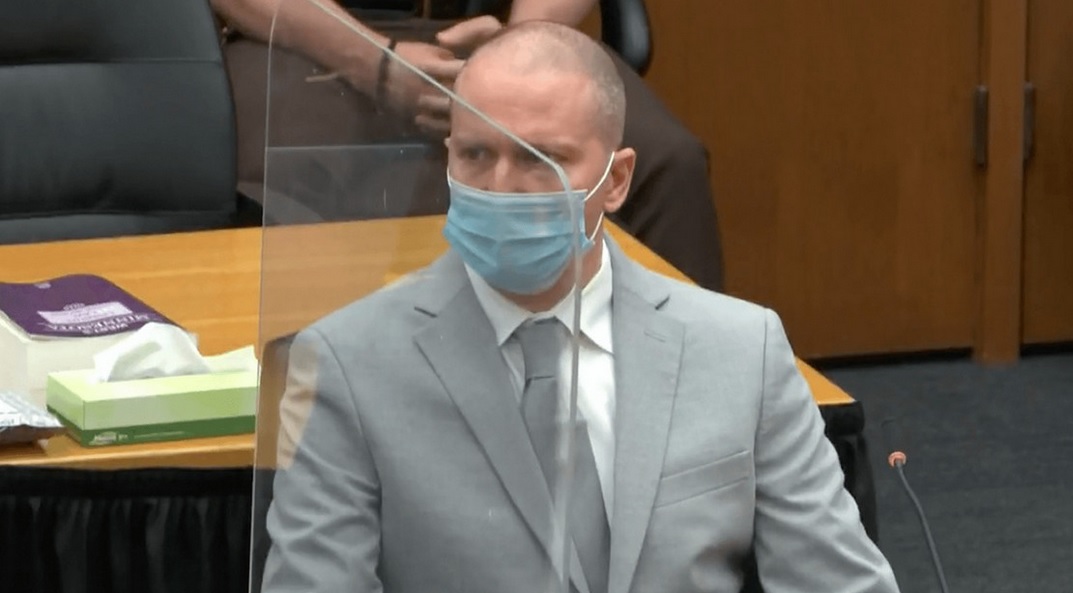 The former Minneapolis police officer who murdered George Floyd last year was sentenced Friday to 22 and a half years in prison.

The former Minneapolis police officer who murdered George Floyd last year was sentenced Friday to 22 and a half years in prison.

In his ruling, Hennepin County Judge Peter Cahill cited the ex-officer’s abuse of a position of trust and authority and particular cruelty to Floyd but cautioned that his decision wasn’t based on emotion, sympathy, public opinion or an attempt to send a message, though he did express sympathy to both families.

The sentencing followed pleas from members of Floyd’s family to give Derek Chauvin the “maximum penalty.”

“We don’t wanna see no more slaps on the wrist. We been through that already,” said Terrence Floyd, one of George Floyd’s brothers. “In my community, in my culture, we’ve been through that already: smacks on the wrist. No, no, no, no. Because if it was us, if the roles was reversed, there wouldn’t be no case. It would’ve been open and shut. We’d have been under the jail, for murdering somebody. So we ask for that same penalty for Derek Chauvin.”

Philonise Floyd, George Floyd’s other brother, argued that he and his family “have been given a life sentence” because George will never come back.

“I stand before you today, asking you to please help us find closure by giving Chauvin the maximum sentence possible,” he said, “making sure he does his time consecutively without the possibilities of parole, probation or getting out early for good behavior.”

Chauvin, 45, pinned his knee on Floyd’s neck for roughly nine and a half minutes after police responded to a call about a possible counterfeit $20 bill at a convenience store in May 2020. The fatal encounter, which was captured on cellphone video by a teenager who was awarded a Pulitzer Prize special citation earlier this month, set off global protests and nationwide calls for police reform and racial justice.

Four members of Floyd’s family delivered personal statements before the sentencing, including Floyd’s daughter, 7-year-old Gianna, who responded to questions via video.

“I ask about him all the time,” she said when asked what she misses most about her father. If she could say anything to him, she said it would be, “I miss you, and I love you.”

Prosecutors had sought a 30-year prison sentence for Chauvin, while defense attorney Eric Nelson pushed for probation with time served.

Matthew Frank, Minnesota’s assistant attorney general, argued that the court had discretion for going beyond sentencing guidelines due to four aggravating factors: abuse of position of trust and authority, treating Floyd with particular cruelty, the presence of children during the offense and the offense being committed with three or more people.

Frank dismissed the defense’s request for probation as “so outside of the real of, I think, real possibility” that he wouldn’t spend much time arguing it.

“We ask the court to impose a sentence of 360 months to the commissioner of corrections,” Frank said.

In his final comments, Nelson suggested the court should focus not only on aggravating factors but also on mitigating factors, noting that in such a high-profile case, “some percentage of the public will view your sentence as a miscarriage of justice,” no matter the outcome.

“This is a case that’s changed the world to some degree,” Nelson said. “I hope it’s positive. It’s my hope the court follows the sentencing guidelines, applies the law in a reasoned manner and imposes a just sentence.”

“There’s gonna be some other information in the future that would be of interest, and I hope things will give you some peace of mind,” he said.

Chauvin’s mother, Carolyn Pawlenty, spoke on behalf of the family, describing her son as a devoted member of the Minneapolis Police Department for 19 years and a quiet, thoughtful, honorable, good, selfless man who is not a racist. She said the characterization that Chauvin is an “aggressive, heartless and uncaring person” is “far from the truth.”

“I believe a lengthy sentence will not serve Derek well,” she said. “When you sentence my son, you will also be sentencing me. I will not be able to see Derek, talk to him on the phone or give him our special hug. Plus, the fact that when he is released, his father and I most likely will not be here.”

“Derek,” she continued, “I want you to know I have always believed in your innocence, and I will never waver from that.”

Chauvin is likely to serve just two-thirds of his sentence, The Associated Press reported.

The three former officers who stood by while Floyd was murdered are due to stand trial in March for aiding and abetting murder and manslaughter. All of the officers, including Chauvin, also face a trial in federal court for civil rights charges.