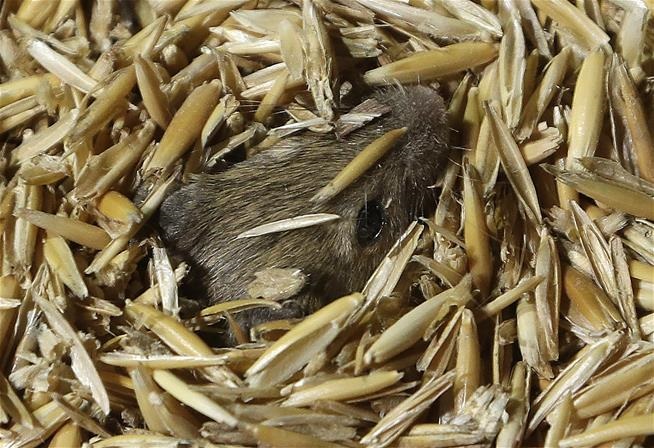 Australia is home to some of the world’s most fearsome creatures. But none is more destructive than the humble house mouse, a plague of which is rampaging across vast swaths of farmland and terrorising countryfolk.

A mouse pokes his nose out while hiding in stored grain on a farm near Tottenham, Australia on May 19, 2021. (Photo: AP/Rick Rycroft)

Australia is home to some of the world’s most fearsome creatures. But none is more destructive than the humble house mouse, a plague of which is rampaging across vast swaths of farmland and terrorising countryfolk.

Farmers in New South Wales, the worst affected state, warned the furry critters could cost them A$1bn ($765m) in lost crops and poison baits this season. Residents in rural towns have been fighting a six-month battle against the army of wild house mice, which has gnawed through wiring on home appliances, polluted water supplies and even bitten patients in hospital beds.

Scientists said the plague was bolstered by favourable weather conditions after years of drought and the nation’s second biggest grain harvest on record.

State authorities have proposed “napalming” the mice by allowing farmers to use the poison bromadiolone against the mice, which has ignited a furious debate over its environmental impact.

A mouse control package worth A$50m unveiled this week includes plans to develop “gene drive” technology to sterilise mice, a feral species that arrived in Australia on the First Fleet.

“The mice are everywhere. They bit through the wires on our dishwasher a few weeks ago and caused a flood,” said Xavier Martin, a grain farmer who lives near Gunnedah, a town in north-east New South Wales. “And even while we are talking now I can hear them scurrying around the roof and walls.”

He said the plague was threatening his winter crops as well as the mental health of farmers, who have absorbed the devastating impact of drought, bushfires, floods and Covid-19 in recent years.

Martin, who is vice-president of the NSW farmers’ lobby group, said he opposed using bromadiolone because of concerns it could kill wildlife that eat the dead mice through secondary poisoning.

However, the NSW government has sought “urgent approval” from the Australian Pesticides and Veterinary Medicines Authority to enable farmers to use bromadiolone, a poison that kills by preventing blood clotting.

Dramatic footage showing mice overrunning grain stores, fields and houses has elevated the political stakes for the state government. Not only does the mouse plague have costly financial implications for farmers but it also threatens public health.

“No one ever forgets living through a mouse plague,” said Steve Henry, an expert in mice at Australia’s scientific research agency Csiro. “They get in your house, in every cupboard, in your bed and in your pantry — literally everywhere you go.”

Mouse urine could spread serious diseases to humans, including leptospirosis and lymphocytic choriomeningitus, which could cause similar symptoms to meningitis, he added.

“Everything in our workshops has literally been touched by mice so we have to keep reiterating to staff to wash their hands because the potential for getting ill is on everything we touch,” said Nicole.

Despite trapping and killing thousands of mice every day more keep coming, she said.

Mice reproduce quickly. A single pair of mice can create 500 pups in a breeding season, which usually lasts from summer to autumn, said Henry.

Predicting how long a mouse plague will last is difficult because it can end abruptly as a result of disease, food shortages and cannibalism.

“When they run out of food the mice start to turn on the sick and weak, they prey on baby mice and the population crashes away really quickly,” said Henry.