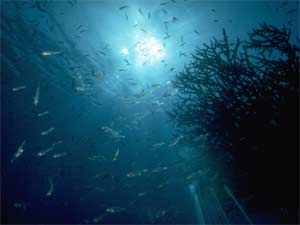 Lower levels of oxygen in the Earth's oceans, particularly off the United States' Pacific Northwest coast, could be another sign of fundamental changes linked to global climate change, scientists say.

They warn that the oceans' complex undersea ecosystems and fragile food chains could be disrupted.

Lower levels of oxygen in the Earth's oceans, particularly off the United States' Pacific Northwest coast, could be another sign of fundamental changes linked to global climate change, scientists say.

They warn that the oceans' complex undersea ecosystems and fragile food chains could be disrupted.

In some spots off Washington state and Oregon , the almost complete absence of oxygen has left piles of Dungeness crab carcasses littering the ocean floor, killed off 25-year-old sea stars, crippled colonies of sea anemones and produced mats of potentially noxious bacteria that thrive in such conditions.

Areas of hypoxia, or low oxygen, have long existed in the deep ocean. These areas — in the Pacific, Atlantic and Indian oceans — appear to be spreading, however, covering more square miles, creeping toward the surface and in some places, such as the Pacific Northwest , encroaching on the continental shelf within sight of the coastline.

"The depletion of oxygen levels in all three oceans is striking," said Gregory Johnson , an oceanographer with the National Oceanic and Atmospheric Administration in Seattle .

In some spots, such as off the Southern California coast, oxygen levels have dropped roughly 20 percent over the past 25 years. Elsewhere, scientists say, oxygen levels might have declined by one-third over 50 years.

"The real surprise is how this has become the new norm," said Jack Barth , an oceanography professor at Oregon State University . "We are seeing it year after year."

Barth and others say the changes are consistent with current climate-change models. Previous studies have found that the oceans are becoming more acidic as they absorb more carbon dioxide and other greenhouse gases.

"If the Earth continues to warm, the expectation is we will have lower and lower oxygen levels," said Francis Chan , a marine researcher at Oregon State .

As ocean temperatures rise, the warmer water on the surface acts as a cap, which interferes with the natural circulation that normally allows deeper waters that are already oxygen-depleted to reach the surface. It's on the surface where ocean waters are recharged with oxygen from the air.

Commonly, ocean "dead zones" have been linked to agricultural runoff and other pollution coming down major rivers such as the Mississippi or the Columbia . One of the largest of the 400 or so ocean dead zones is in the Gulf of Mexico , near the mouth of the Mississippi .

However, scientists now say that some of these areas, including those off the Northwest, apparently are linked to broader changes in ocean oxygen levels.

The Pacific waters off Washington and Oregon face a double whammy as a result of ocean circulation.

Scientists have long known of a natural low-oxygen zone perched in the deeper water off the Northwest's continental shelf.

During the summer, northerly winds aided by the Earth's rotation drive surface water away from the shore. This action sucks oxygen-poor water to the surface in a process called upwelling.

Though the water that's pulled up from the depths is poor in oxygen, it's rich in nutrients, which fertilize phytoplankton. These microscopic organisms form the bottom of one of the richest ocean food chains in the world. As they die, however, they sink and start to decay. The decaying process uses oxygen, which depletes the oxygen levels even more.

Southerly winds reverse the process in what's known as down-welling.

Changes in the wind and ocean circulation since 2002 have disrupted what had been a delicate balance between upwelling and down-welling. Scientists now are discovering expanding low-oxygen zones near shore.

"It is consistent with models of global warming, but the time frame is too short to know whether it is a trend or a weather phenomenon," Johnson said.

Others were slightly more definitive, quicker to link the lower oxygen levels to global warming rather than to such weather phenomena as El Nino or the Pacific Decadal Oscillation, a shift in the weather that occurs every 20 to 30 years in the northern oceans.

"It's a large disturbance in the ecosystem that could have huge biological changes," said Steve Bograd , an oceanographer at NOAA's Southwest Fisheries Science Center in Southern California .

Bograd has been studying oxygen levels in the California Current, which runs along the West Coast from the Canadian border to Baja California and, some scientists think, eventually could be affected by climate change.

So far, the worst hypoxic zone off the Northwest coast was found in 2006. It covered nearly 1,200 square miles off Newport, Ore. , and according to Barth it was so close to shore you could hit it with a baseball. The zone covered 80 percent of the water column and lasted for an abnormally long four months.

Because of upwelling, some of the most fertile ocean areas in the world are found off Washington and Oregon . Similar upwelling occurs in only three other places, off the coast of Peru and Chile , in an area stretching from northern Africa to Portugal and along the Atlantic coast of South Africa and Namibia .

Scientists are unsure how low oxygen levels will affect the ocean ecosystem. Bottom-dwelling species could be at the greatest risk because they move slowly and might not be able to escape the lower oxygen levels. Most fish can swim out of danger. Some species, however, such as chinook salmon, may have to start swimming at shallower depths than they're used to. Whether the low oxygen zones will change salmon migration routes is unclear.

Some species, such as jellyfish, will like the lower-oxygen water. Jumbo squid, usually found off Mexico and Central America , can survive as oxygen levels decrease and now are found as far north as Alaska .

"It's like an experiment," Chan said. "We are pulling some things out of the food web and we will have to see what happens. But if you pull enough things out, it could have a real impact."