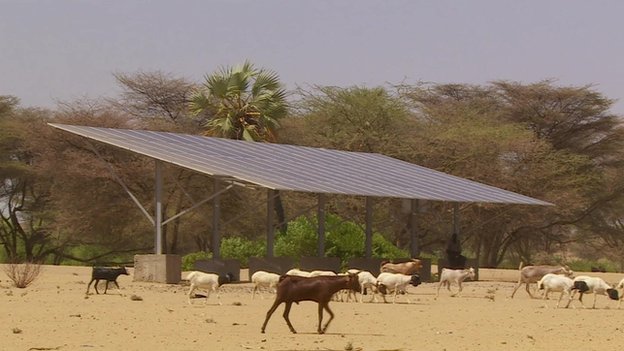 Is the sun the answer to Africa's energy problems? Analysts believe solar power could be the world's largest source of power by 2050. Deep in northern Kenya, above Napuu Village, there is only the brightest of full moons to light the way.

Is the sun the answer to Africa's energy problems? Analysts believe solar power could be the world's largest source of power by 2050. (Photo: BBC)

Is the sun the answer to Africa's energy problems? Analysts believe solar power could be the world's largest source of power by 2050. Deep in northern Kenya, above Napuu Village, there is only the brightest of full moons to light the way.

You can hear the chatter as villagers sit around open fires but with the nearest mains power station more than 200km (124 miles) away, there is nothing else to light up the village.

Here power is a precious thing and only a few can enjoy what many take for granted.

But inside David Lodio's small home - two rooms made of breeze blocks and mud - there is light.

His family watch television, his six children do their homework without candles. There is no need for expensive kerosene lamps - all because of a single solar panel on his tin roof.

"When we started using the solar panels, life changed in a good way," says Mr Lodio.

The solar energy inside here only lasts for a few hours but it connects this family to the world and fuels the ambitions of 12-year-old Duncan.

"In the future I would like to have many solar panels, so my children will study well and pass their exams - that is my wish," he says.

Duncan is only a child but he is dreaming of solar giving future generations a better life.

Only a few thousand live in Napuu and only a few here have solar power. With bills to pay, Mr Lodio says at the moment he cannot afford more solar panels but wants help to buy more.

"We do not have enough panels. I we get more panels, we can pass energy to the bedroom and kitchen," he tells me.

More and more solar farms are being built across Africa. One of the biggest is in South Africa, where a gigantic solar farm near Kimberley generates clean energy for more than 80,000 homes.

In Ghana, a 155 megawatt solar farm is being built and there are similar plans in Morocco too.

The problem is that more energy is needed, especially when you consider that nine out of 10 people in rural Kenya do not have access to mains electricity.

This demand for energy has seen a rise in African solar energy entrepreneurs.

In Lodwa, Kenya, Jacob Jugano has made solar his business. "This is for families, business is good," he says. "[For] those who cannot afford [solar panels], we still have the small solar lamps."

His stall sells every type of solar product you could imagine. A solar lamp costs $10 (£6.50), while a solar kit including panel, battery, wires and light bulbs costs around $150 (£98).

"The sun is very high here, more and more people want the panels. If people have no light, everything would be impossible," Mr Jugano says.

"If we can get more solar we can grow together. The government has helped us - they have removed the VAT from solar, so the solar has become cheaper."

So what about Africa's solar revolution? By 2050, analysts from the International Energy Association (IEA) believe the sun could be the world's largest source of power.

That prediction is based on a number of factors, like continued investment in solar energy and cohesive government policies promoting clean energy.

Today though, the IEA believes there are more than half a billion people still without mains electricity in sub-Saharan Africa.

Oliver Johnson from the Stockholm Environment Institute believes solar is a long way from being Africa's power salvation.

"There are some exciting things going on, there are some really interesting markets developing for things like solar portable lanterns but the idea of a solar revolution is a bit too strong," he says.

"There is still a lot of work that needs to be done."

However, Mr Johnson added: "There is a lot of potential, the sun always shines here and you do need alternative off-grid solutions but there needs to be continued investment and support."

"This is a long-term process. This takes time and will not happen overnight," he adds.

The issue is reaching the rural areas of Africa mains electricity probably never will. In Napuu, a water project funded by the Japanese government and fuelled by solar power is having a dramatic effect.

For the first time the village has fresh, running water. Giant solar panels create energy to pump the water from deep underground.

It has given new hope to villagers like Joseph Lopeta.

He says that before the project, he had to travel a long way to find water - and even then it would often be contaminated.

"[The project] has saved lives and now we have fresh water, we have something to smile about."

A revolution may be some way off, but solar power is beginning to change people's lives.