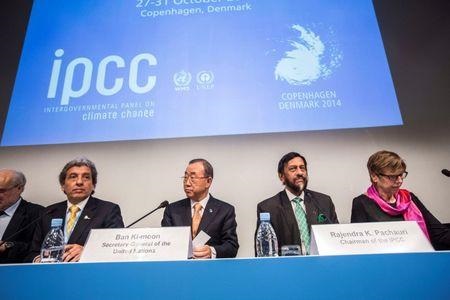 Governments can keep climate change in check at manageable costs but will have to cut greenhouse gas emissions to zero by 2100 to limit risks of irreversible damage, a U.N. report said on Sunday.

Governments can keep climate change in check at manageable costs but will have to cut greenhouse gas emissions to zero by 2100 to limit risks of irreversible damage, a U.N. report said on Sunday.

"Science has spoken. There is no ambiguity in the message. Leaders must act, time is not on our side," U.N. Secretary-General Ban Ki-moon said in presenting the report in Copenhagen that is meant to guide global climate policy-making.

With fast action, climate change could be kept in check at manageable costs, he said, referring to a U.N. goal of limiting average temperature rises to 2 degrees Celsius (3.6 degrees Fahrenheit) above pre-industrial times. Temperatures are already up 0.85 C (1.4F).

The study by the Intergovernmental Panel on Climate Change (IPCC), approved by more than 120 governments, will be the main handbook for negotiators of a U.N. deal to combat global warming due at a summit in Paris in December 2015.

To get a good chance of staying below 2C, the report's scenarios show that world emissions would have to fall by between 40 and 70 percent by 2050 from current levels and to "near zero or below in 2100".

Below zero would require extracting carbon dioxide from the atmosphere - for instance by planting forests that soak up carbon as they grow or by burying emissions from power plants that burn wood or other biomass.

To cut emissions, the report points to options including energy efficiency, renewable energies from wind to solar power, nuclear energy or coal-fired power plants where carbon dioxide is stripped from the exhaust fumes and buried underground.

"With CCS it's entirely possible that fossil fuels can be used on a large scale," IPCC chairman Rajendra Pachauri said. In most scenarios, the report says "fossil fuel power generation without CCS is phased out almost entirely by 2100".

Without extra efforts to cut emissions, "warming by the end of the 21st century will bring high risks of severe, widespread, and irreversible impacts globally," the IPCC said.

"Irreversible" could mean, for instance, a runaway melt of Greenland's vast ice sheets that could swamp coastal regions and cities or disruptions to monsoons vital for growing food.

"The cost of inaction will be horrendously higher than the cost of action," Pachauri said.

Deep cuts in emissions would reduce global growth in consumption of goods and services, the economic yardstick used by the IPCC, by just 0.06 percentage point a year below annual projected growth of 1.6 to 3.0 percent, it said.

So far, major emitters are far from curbs on emissions on a scale outlined by the IPCC. China, the United States and the European Union are top emitters.

John P. Holdren, Director of the White House Office of Science & Technology Policy, said the report was "yet another wake-up call to the global community that we must act together swiftly and aggressively in order to stem climate change."

"We must safeguard the world for future generations by striking a new climate deal in Paris next year," British Secretary of State for Climate and Energy Ed Davey said.

Environmental groups welcomed the report, including its focus on zero emissions. "This is no longer about dividing up the pie. You need to get to zero. At some stage there is no pie left for anyone," said Kaisa Kosonen of Greenpeace.

The report also says that it is at least 95 percent sure that manmade emissions of greenhouse gases, rather than natural variations in the climate, are the main cause of warming since 1950, up from 90 percent in a previous assessment in 2007.