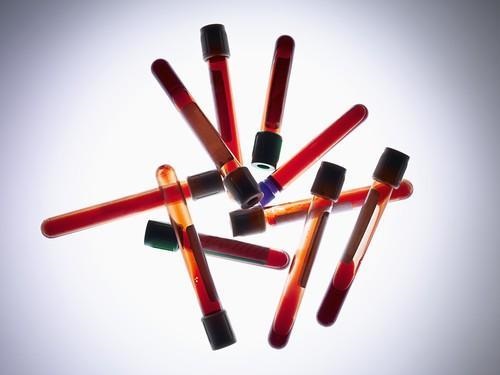 Type AB Blood? You May Be More Prone to Memory Loss (Image- Corbis)

But experts cautioned that those with AB blood shouldn't panic because other circumstances play a bigger part in their risk for mental impairment.

"If you were to do the same study and look at smoking, lack of exercise, obesity and other lifestyle factors, the risk of dementia is much, much higher," said Dr. Terence Quinn, a clinical lecturer in stroke and geriatric medicine at the University of Glasgow in Scotland. "People who are worried about dementia, whether they have that blood group or not, should look at making those lifestyle changes."

In the study, researchers gave more than 30,000 people, aged 45 and older, a series of memory and thinking skills tests and then tested them again a little more than three years later. From this group, 495 participants scored low enough to qualify as having some memory or thinking impairment, and their blood types were compared to those of 587 participants with normal cognitive (mental) scores.

After making adjustments for differences in the participants' age, race, sex and geographical region, those who had AB blood types were 82 percent more likely to have impaired thinking skills than those with type O blood, according to the study.

Yet these findings, published online Sept. 10 in the journal Neurology, aren't necessarily surprising considering other recent research, said the study's senior researcher, Dr. Mary Cushman, a professor of hematology at the University of Vermont College of Medicine. It's already known that having blood type AB can affect blood clotting characteristics and risk of blood vessel-related conditions, she said. In addition, her research group found earlier this year that the AB blood type was linked to a higher risk of stroke.

About half of the association between stroke and AB blood type in the previous study was related to higher levels of clotting factor VIII, a blood protein that helps blood clot to stop bleeding. Factor VIII is the protein that is deficient in individuals with hemophilia. Too little factor VIII, and a person's blood doesn't clot properly. Too much, and the body forms clots too easily, potentially leading to heart attacks, stroke or large blood clots that clog veins.

But in this study, only about 20 percent of the association between memory problems and AB blood type could be explained by higher levels of factor VIII, suggesting other reasons for the link, Cushman said.

Though it's not clear what those reasons are, it may relate to the link between AB blood type and vascular problems, considering that stroke and dementia share several risk factors, she said. Those with memory and thinking impairment in the study were also more likely to smoke and to have high blood pressure, diabetes, heart disease or high cholesterol.

"People who have AB blood type should not be overly worried about these findings since the association we saw was relatively small and requires other research for confirmation," Cushman said. An association does not prove cause-and-effect.

She said it's more important that all individuals aim for a healthy lifestyle, regardless of blood type. Healthy lifestyle choices she recommended included not smoking, exercising regularly, maintaining a healthy diet and keeping up with preventive care, such as controlling blood pressure and blood sugar.

"It is also important to exercise your brain by staying 'cognitively active' with things like reading and playing games like cards or puzzles," Cushman said.

Quinn, who wasn't involved in the research, said the study provides some insight into the underlying cause of dementia. "Along with other work, this study implies that blood is a predictor of dementia, and that's probably related to possible changes in blood, such as silent strokes or silent blood clots, that may, over time, cause memory problems."

He also emphasized the importance of healthy behaviors in reducing your risk of dementia.

"Although these studies are interesting and give us knowledge, the way to prevent dementia is not through drugs that affect blood," Quinn said. "It's through environmental, lifestyle factors."