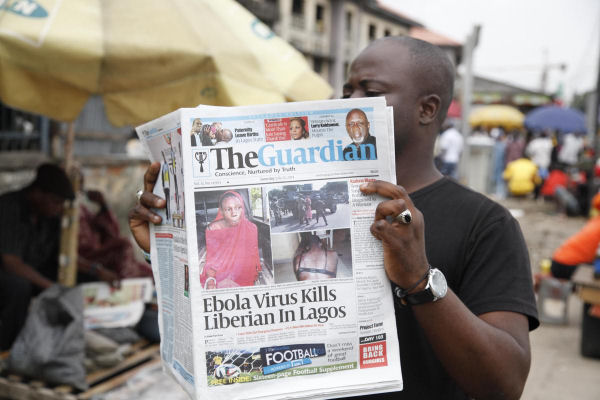 Nigeria was on alert against the possible spread of Ebola on Saturday, a day after the first confirmed death from the virus in Lagos, Africa's biggest city and the country's financial capital.

The health ministry said Friday that a 40-year-old Liberian man died at a private hospital in Lagos from the disease, which has now killed more than 650 people in four west African countries since January -- the deadliest outbreak in history.

A man reads a newspaper on a Lagos street with the headline Ebola Virus kills Liberian in Lagos, July 26, 2014. (AP/Sunday Alamba)

Nigeria was on alert against the possible spread of Ebola on Saturday, a day after the first confirmed death from the virus in Lagos, Africa's biggest city and the country's financial capital.

The health ministry said Friday that a 40-year-old Liberian man died at a private hospital in Lagos from the disease, which has now killed more than 650 people in four west African countries since January -- the deadliest outbreak in history.

The victim, who worked for the Liberian government, collapsed at Lagos international airport after arriving on a flight from Monrovia via the Togolese capital Lome on Tuesday, according to the Nigerian government.

He did not come into contact with the public in Lagos other than health workers before being isolated at the hospital, they added.

The World Health Organization (WHO) said on Saturday that efforts were being made to track down people the victim may have come into contact with on his journey from the Liberian capital.

Nigerian Health Minister Onyebuchi Chukwu had previously said all passengers who travelled with the victim on the Togo-based carrier ASKY from Lome had been traced.

Meanwhile an emergency operations centre has been set up, coordinated by the Nigeria Centre for Disease Control (CDC), and all hospitals have been equipped to handle emergencies and suspected cases, the minister added.

Borders have not been closed but health specialists have been deployed to all sea ports and international airports to identify any passengers displaying symptoms associated with Ebola.

In Lagos, Yewande Adeshina, the special adviser on public health to the Lagos State governor, said: "We have taken delivery of 30 personal protective equipment (sets) from the federal ministry of health and they have promised to give an additional 220 for our medical personnel to protect them from any risks...

"We are also reaching out to private clinics, hospitals and health facilities in the state to promptly report any suspected case to the authorities."

Information Minister Labaran Maku said a radio and television public awareness campaign about Ebola has been running for several months on state media and would continue.

Ebola, a form of haemorrhagic fever that can have a 90 percent fatality rate, has infected some 1,100 people and left 660 dead in Liberia, Guinea and Sierra Leone since the start of the year.

Spread by close contact with an infected person through bodily fluids such as sweat, blood and tissue, it can fell victims within days, causing severe fever and muscle pain, vomiting and diarrhoea -- and in some cases, organ failure and unstoppable bleeding.

Ebola's arrival in Lagos has prompted fears of its spread, since the overcrowded megacity is a regional and international transport hub and a base for many foreign multinationals with offices in Africa's largest economy.

It is also home to more than 20 million people, but public sanitation and health care facilities are poor.

Doctors working in the under-funded and poorly equipped public health sector have been on strike since July 1 over pay and conditions.

One of Britain's leading virologists said while Ebola's arrival in Lagos was "certainly not welcome", Lagos' more developed public health care infrastructure and accessible population compared to affected rural areas could work in its favour.

"The important thing to remember is that Ebola is not a virus that transmits easily, for example, by respiratory droplets. There has to be very close or physical contact," Professor Ian Jones told AFP in an email exchange.

"If this is prevented the outbreak can be stopped in its tracks. In this regard the authorities' statement that all contacts have been traced and quarantined is very reassuring," said Jones, from the University of Reading, west of London.

"I wouldn't want to dismiss this case. It's a significant alarm call, but I would be hopeful that it is a rare incident and will not lead to the virus spreading more widely."

WHO spokesman Tarik Jasarevic said tracing people who have been in contact with an infected person was key in both rural and urban areas, although that may prove more complicated in cities.

"When there is an outbreak, it is important to see whom the people have been in contact with and follow them for 21 days," he said by phone from Sierra Leone.