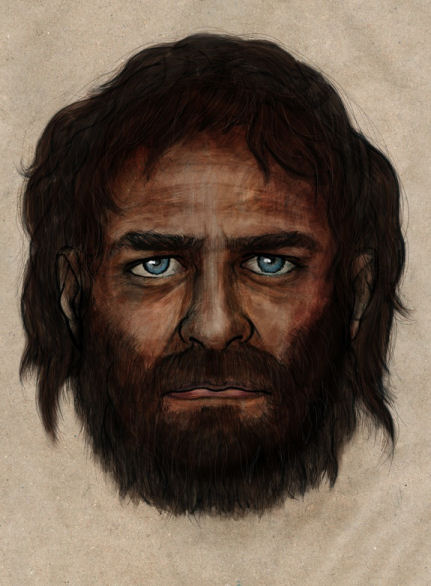 The analysis of the man, who lived in modern-day Spain only about 7,000 years ago, shows light-skin genes in Europeans evolved much more recently than previously thought.

An illustration of what the ancient hunter-gatherer may have looked like. Image - CSIC

The analysis of the man, who lived in modern-day Spain only about 7,000 years ago, shows light-skin genes in Europeans evolved much more recently than previously thought.

The findings, which were detailed today (Jan. 26) in the journal Nature, also hint that light skin evolved not to adjust to the lower-light conditions in Europe compared with Africa, but instead to the new diet that emerged after the agricultural revolution, said study co-author Carles Lalueza-Fox, a paleogenomics researcher at Pompeu Fabra University in Spain.

Many scientists have believed that lighter skin gradually arose in Europeans starting around 40,000 years ago, soon after people left tropical Africa for Europe's higher latitudes. The hunter-gatherer's dark skin pushes this date forward to only 7,000 years ago, suggesting that at least some humans lived considerably longer than thought in Europe before losing the dark pigmentation that evolved under Africa's sun.

"It was assumed that the lighter skin was something needed in high latitudes, to synthesize vitamin D in places where UV light is lower than in the tropics," Lalueza-Fox told LiveScience.

Scientists had assumed this was true because people need vitamin D for healthy bones, and can synthesize it in the skin with energy from the sun's UV rays, but darker skin, like that of the hunter-gatherer man, prevents UV-ray absorption.

But the new discovery shows that latitude alone didn't drive the evolution of Europeans' light skin. If it had, light skin would have become widespread in Europeans millennia earlier, Lalueza-Fox said.

In 2006, hikers discovered two male skeletons buried in a labyrinthine cave known as La Braña-Arintero, in the Cantabrian Mountains of Spain.

At first, officials thought the skeletons may have been recent murder victims. But then, an analysis revealed the skeletons were about 7,000 years old, and had no signs of trauma. The bodies were covered with red soil, characteristic of Paleolithic burial sites, Lalueza-Fox said.

At the time of the discovery, genetic techniques weren't advanced enough to analyze the skeletons. Several years later, the team revisited the skeletons and extracted DNA from a molar tooth in one skeleton. (The other skeleton had been sitting in water for millennia, so his DNA was more degraded, Lalueza-Fox said.)

The new analysis of that DNA now shows the man had the gene mutation for blue eyes, but not the European mutations for lighter skin.

The discovery may explain why baby blues are more common in Scandinavia. It's been thought that poor conditions in northern Europe delayed the agricultural revolution there, so Scandinavians may have more genetic traces of their hunter-gatherer past — including a random blue-eye mutation that emerged in the small population of ancient hunter-gatherers, Lalueza-Fox said.

The finding implies that for most of their evolutionary history, Europeans were not what many people today would call 'Caucasian', said Guido Barbujani, president of the Associazione Genetica Italiana in Ferrara, Italy, who was not involved in the study.

Instead, "what seems likely, then, is that the dietary changes accompanying the so-called Neolithic revolution, or the transition from food collection to food production, might have caused, or contributed to cause, this change," Barbujani said.

In the food-production theory, the cereal-rich diet of Neolithic farmers lacked vitamin D, so Europeans rapidly lost their dark-skin pigmentation only once they switched to agriculture, because it was only at that point that they had to synthesize vitamin D from the sun more readily.