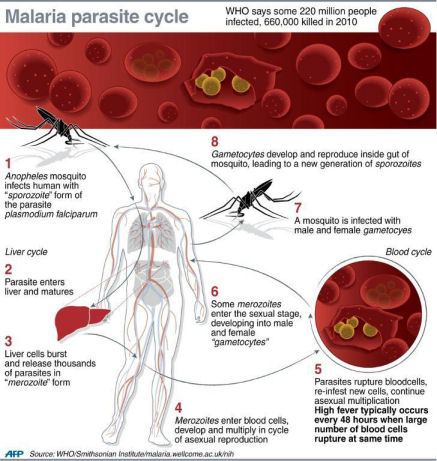 Experts in Africa, the continent worst-hit by malaria, reacted with optimism but also caution on Tuesday to news that the first vaccine against the killer disease may soon reach the market.

GlaxoSmithKline said it was seeking approval for a prototype vaccine that reduced the risk of malaria by almost half among children aged between five and 17 months, and by around a quarter among infants aged between six and 12 weeks.

Experts in Africa, the continent worst-hit by malaria, reacted with optimism but also caution on Tuesday to news that the first vaccine against the killer disease may soon reach the market.

GlaxoSmithKline said it was seeking approval for a prototype vaccine that reduced the risk of malaria by almost half among children aged between five and 17 months, and by around a quarter among infants aged between six and 12 weeks.

"This is the first vaccine against malaria," Sophie Biernaux, a malaria vaccine leader at GSK, told AFP in Durban.

If the British drugmaker's application is successful, the vaccine could be rolled out within two years.

The mosquito-borne disease kills an estimated 660,000 people each year, 90 percent of them in Africa, with the majority being children under five.

But others were more cautious.

In Gabon, one of the countries where clinical trials were conducted, researcher Bertrand Lell said the vaccine's efficacy "is not very large" compared to vaccines such as the one against polio.

"But given the prevalence of malaria in Africa, you can imagine the impact it will have on people if the mortality rate is down 50 percent," said Lell, of the Lambarene Centre for Medical Research.

In the Democratic Republic of Congo -- which has the world's second-highest malaria death rate after Nigeria -- SANRU, an organisation that distributes mosquito nets to fight malaria, said it was too early to declare victory.

It noted that the vaccine did not offer a complete shield, although trials -- including assessment of a booster shot -- are ongoing.

"This is good news as long as the vaccine shows a required level of efficacy," said John Gikapa, technical advisor to SANRU.

The research was carried out at 11 centres in seven African countries, covering more than 15,000 infants and children.

GSK said it would now file an application to the European Medicines Agency (EMA) under a process aimed at marketing new drugs for poorer countries.

The European medications watchdog will then give a "scientific opinion" on the vaccine's safety and efficacy.

This opens the way for it to be considered by the World Health Organisation (WHO), which in turn can fast-track its licensing in individual countries in Africa.

The vaccine -- called RTS,S -- is a frontrunner in the race to develop the first immunisation for malaria.

The results for the Phase III trial were unveiled Tuesday at a conference in South Africa.

They are sure to raise as many questions as answers.

"There are a number of possible hypotheses for these differences" in effectiveness, said Lucas Otieno of the Kenya Medical Research Institute, one of the principal investigators in the trial.

The theories include possible interference with the vaccine by maternal antibodies and the impact of other vaccines administered around the same time, he said.

Experts are also wary about the logistics of administering the vaccine in Africa, where the people most at risk often live in poverty-stricken and difficult-to-access places.

Just getting drugs to where they are needed can be a headache, requiring proper handling in hot, humid environments and secure storage in countries where theft or corruption may be rampant.

"Any progress on fighting malaria is very welcome, and this vaccine could be another important weapon in our armoury," said Martin de Smet, a malaria specialist with Doctors Without Borders (MSF).

"Delivering injection-based vaccines in the kind of environments where malaria is prominent is also hugely challenging -- even for treatments that are 100-percent effective," he said.

"Locations are traditionally remote, with people having to walk for days to get to a health facility, and often require refrigeration."

GSK said if it gets the green light, the vaccine would probably be distributed through agencies such as the United Nations Children's Fund and the GAVI Alliance, a public-private health partnership.

The price would cover the cost of manufacturing plus a margin of five percent which would be ploughed into research for next-generation vaccines, a GSK spokesman said.