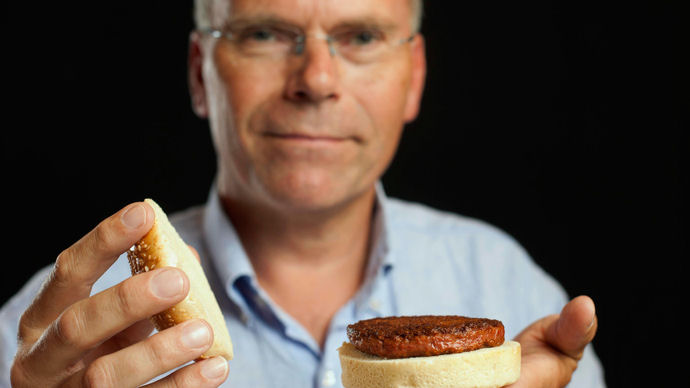 The world's first lab-grown burger has been cooked and eaten at a news conference in London.

Scientists took cells from a cow and, at an institute in the Netherlands, turned them into strips of muscle that they combined to make a patty.

The world's first lab-grown burger has been cooked and eaten at a news conference in London.

Scientists took cells from a cow and, at an institute in the Netherlands, turned them into strips of muscle that they combined to make a patty.

One food expert said it was "close to meat, but not that juicy" and another said it tasted like a real burger.

Researchers say the technology could be a sustainable way of meeting what they say is a growing demand for meat.

The burger was cooked by chef Richard McGeown, from Cornwall, and tasted by food critics Hanni Ruetzler and Josh Schonwald.

Upon tasting the burger, Austrian food researcher Ms Ruetzler said: "I was expecting the texture to be more soft... there is quite some intense taste; it's close to meat, but it's not that juicy. The consistency is perfect, but I miss salt and pepper.

"This is meat to me. It's not falling apart."

Food writer Mr Schonwald said: "The mouthfeel is like meat. I miss the fat, there's a leanness to it, but the general bite feels like a hamburger.

"What was consistently different was flavour."

Prof Mark Post, of Maastricht University, the scientist behind the burger, remarked: "It's a very good start."

The professor said the meat was made up of tens of billions of lab-grown cells. Asked when lab-grown burgers would reach the market, he said: "I think it will take a while. This is just to show we can do it."

"We have a situation where 1.4 billion people in the world are overweight and obese, and at the same time one billion people worldwide go to bed hungry," she said.

Prof Mark Post, of Maastricht University, explains how he and his colleagues made the world's first lab-grown burger

"That's just weird and unacceptable. The solutions don't just lie with producing more food but changing the systems of supply and access and affordability, so not just more food but better food gets to the people who need it."

Stem cells are the body's "master cells", the templates from which specialised tissue such as nerve or skin cells develop.

Most institutes working in this area are trying to grow human tissue for transplantation to replace worn-out or diseased muscle, nerve cells or cartilage.

Prof Post is using similar techniques to grow muscle and fat for food.

He starts with stem cells extracted from cow muscle tissue. In the laboratory, these are cultured with nutrients and growth-promoting chemicals to help them develop and multiply. Three weeks later, there are more than a million stem cells, which are put into smaller dishes where they coalesce into small strips of muscle about a centimetre long and a few millimetres thick.

These strips are collected into small pellets, which are frozen. When there are enough, they are defrosted and compacted into a patty just before being cooked.

Because the meat is initially white in colour, Helen Breewood - who works with Prof Post - is trying to make the lab-grown muscle look red by adding the naturally-occurring compound myoglobin.