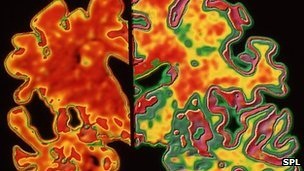 Genetic markers that could help highlight who is at risk of developing Alzheimer's disease have been identified by US scientists.

The research in Neuron identifies mutations that affect the build-up of certain proteins in the brain.

The brains of Alzheimer's patients - like the one on the left - are more shrunken than normal ones. (BBC)

Genetic markers that could help highlight who is at risk of developing Alzheimer's disease have been identified by US scientists.

The research in Neuron identifies mutations that affect the build-up of certain proteins in the brain.

High levels of these tau proteins increase the chance of having the disease.

UK experts said the study could help understand the changes that occur in the brains of Alzheimer's patients.

Tangles of a kind of tau called phosphorylated tau (ptau) are a hallmark of the disease.

One of the new gene variants identified by the Washington University School of Medicine team was also shown to be linked to a small increased risk of developing Alzheimer's and a greater risk of cognitive decline.

The team used genetic information from more than 1,200 people, significantly larger than previous studies in this area.

Dr Alison Goate, who led the study, said: "We anticipate that knowledge about the role of these genes in Alzheimer's disease may lead to the identification of new targets from therapies or new animal or cellular models of the disease.

UK experts said the study adds to the number of genetic markers that have been linked to the development of Alzheimer's disease.

Dr Doug Brown, director of research and development at the Alzheimer's Society, said: "In discovering new genes that have a link to Alzheimer's, this robust study helps scientists to better understand the way the brain changes when dementia develops.

"Research such as this may in the future help us to engineer treatments aimed at stopping such changes and therefore slowing or stopping the effects of dementia."

He added: "These new gene markers, as important as they are, are likely to be a few of many that might affect a person's risk of developing Alzheimer's.

"However, it is important to stress that lifestyle factors also play a role, and research has shown that eating a balanced diet, exercising regularly, not smoking, and getting your blood pressure and cholesterol checked regularly are key ways to reduce your risk of dementia."