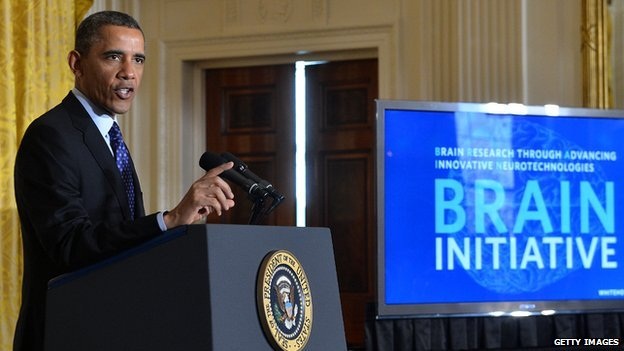 US President Barack Obama has unveiled a new initiative to map the brain.

Speaking at the White House, he announced an initial $100m investment to shed light on how the brain works and provide insight into diseases such as Alzheimer's and epilepsy.

US President Barack Obama has unveiled a new initiative to map the brain.

Speaking at the White House, he announced an initial $100m investment to shed light on how the brain works and provide insight into diseases such as Alzheimer's and epilepsy.

President Obama said initiatives like the Human Genome Project had transformed genetics; now he wants to do the same with the brain.

The project will be carried out by both public and private-sector scientists.

The project is called Brain Research Through Advancing Innovative Neurotechnologies - or BRAIN.

Mr Obama said: "There is this enormous mystery waiting to be unlocked, and the BRAIN initiative will change that by giving scientists the tools they need to get a dynamic picture of the brain in action and better understand how we think and learn and remember. And that knowledge will be transformative."

The project will begin in 2014, and will involve the National Institutes of Health (NIH), the Defense Advanced Research Projects Agency (Darpa), and the National Science Foundation (NSF).

The $100m investment will be used to develop new technologies to investigate how the billions of individual cells in the human brain interact.

Scientists will also focus on how the brain records, stores and processes information, and investigate how brain function is linked to behaviour.

Mr Obama said that while our understanding of the brain was growing, there was still a long way to go.

"As humans we can identify galaxies light years away, we can study particles smaller than the atom, but we still haven't unlocked the mystery of the 3lb of matter that sits between our ears," he said.

The project will also involve partnerships with the private sector.

This includes the Allen Institute for Brain Science, which has committed to spending $60m annually on projects relating to the BRAIN initiative, and the Salk Institute for Biological Studies, which has dedicated $28m.

An ethics committee will oversee the work.

Mr Obama said that it was worth investing in science, claiming that it would help to create new jobs and boost the economy.

He said that basic research was "a driver of growth".

"We can't afford to miss these opportunities while the rest of the world races ahead," he added,

The funding announcement comes after recent news of another push in neuroscience in Europe.

About 80 European research institutions and some from outside the EU will take part in the Human Brain Project, which is estimated to cost more than 1bn euros.

The project will use supercomputer-based models and simulations to reconstruct a virtual human brain to develop new treatments for neurological conditions.