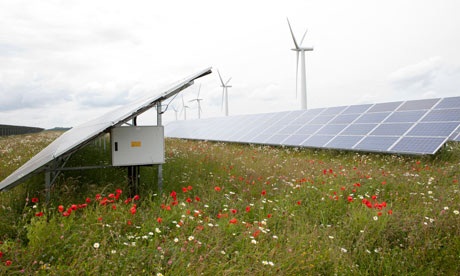 A UK firm has announced plans to build what it claims is the biggest photovoltaic (PV) solar power plant in Africa.

The Nzema project, based in Ghana, will be able to provide electricity to more than 100,000 homes.

A UK firm has announced plans to build what it claims is the biggest photovoltaic (PV) solar power plant in Africa.

The Nzema project, based in Ghana, will be able to provide electricity to more than 100,000 homes.

The developers say that they are optimistic that finance for the project will be confirmed within six months.

The initiative is being developed by Blue Energy, a UK-based renewable energy investment company.

Dozens of solar projects have been announced across Africa in recent years but few have been on this ambitious scale says industry analyst Ash Sharma at IMS Research. He says the 155 megawatt plant will increase Ghana's generating capacity by 6%.

He says that a key element in helping the project go ahead has been Ghana's renewable energy law under which the plant has been awarded a feed-in tariff for 20 years. These are premium prices, guaranteed for the working life of the site.

Project director Douglas Coleman, from Mere Power Nzema Ltd. who will build the plant, told BBC News that it was "fully cooked" in planning terms.
UV on earth This map shows the amount of ultraviolet radiation reaching the ground

"The project has land, it has planning consent, it has a generating licence, and it has received a feed-in tariff," he said, "it is the right plant in the right place at the right time."

He was confident that the finance needed to build the plant could be raised in the next six months.

The company behind the scheme is majority owned and funded by members of the Stadium Group, a large European private asset and development company with £2.5bn under management.

Ash Sharma believes that the backing of this firm plus the feed-in tariff makes the idea viable.

"One of the biggest stumbling blocks has been overcome and the financing looks like it could be in a good position to succeed I would say."

Unlike many other solar projects in Africa that use concentrated solar power, the Nzema plant will use photovoltaic (PV) technology to convert sunlight directly into electricity. Douglas Coleman says the characteristics of the Sun in Ghana favour PV.

"We can predict with great certainty on an annual basis, the output from the plant. That predictability means we can harmonise with the needs of the transmission network, to balance load with generation."

While concerns have been raised in recent weeks about the future of North Africa's Desertec project that aims to export solar power to Europe, researchers are far more hopeful about the prospects for local African markets.

Demand for renewable energy has been held back in emerging economies like Ghana by high costs, but a recent glut of solar panels on world markets has seen prices tumble - much to the advantage of African countries.

"The reason the technology hasn't taken off so far is that it has been too expensive," says Ash Sharma, "but the costs of solar have decreased dramatically in the last two years, they've fallen by 40% plus, and this has really enabled it to be used in emerging regions in Africa and Asia."

Installation of more than 630,000 solar PV modules will begin by the end of next year with electricity being generated early in 2014. It is due to reach full capacity at the end of 2015.