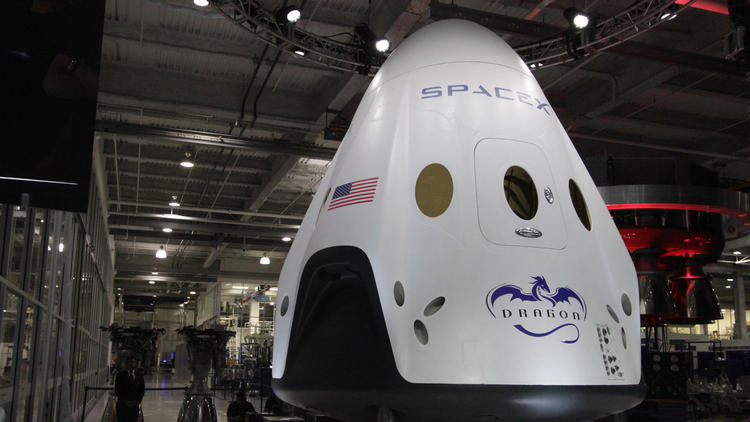 NASA is a giant step closer to launching Americans again from U.S. soil.

On Tuesday, the space agency announced it has picked Boeing and SpaceX to transport astronauts to the International Space Station in the next few years.

NASA is a giant step closer to launching Americans again from U.S. soil.

On Tuesday, the space agency announced it has picked Boeing and SpaceX to transport astronauts to the International Space Station in the next few years.

NASA Administrator Charles Bolden named the winners of the competition at Kennedy Space Center, next door to where the launches should occur in a few years.

The deal will end NASA's expensive reliance on Russia to ferry astronauts to the space station. NASA has set a goal of 2017 for the first launch under the program.

Boeing, the veteran of the competitors, would assemble its crew capsules at Kennedy. The new California-based SpaceX is already delivering supplies to the space station; its crew capsule is a version of its cargo carrier.

U.S. astronauts have been riding Russian rockets ever since NASA's space shuttles retired in 2011. The latest price tag is $71 million per seat; NASA has at least four of its own astronauts flying up on a Russian Soyuz, to the space station, every year.

The commercial crew program follows the successful cargo delivery effort underway for the past two years, also under NASA contract. The objective, for years, has been for NASA to hand space station flights to private companies and focus on getting astronauts into true outer space, with destinations such as asteroids and Mars. NASA is prepping its first-ever Orion space exploration capsule for a test flight in December.

Billionaire Elon Musk's Space Exploration Technologies Corp. — SpaceX for short — became the first private company to launch a spacecraft into orbit and retrieve it in 2010. The SpaceX Dragon capsule made its first space station trip, with astronaut supplies, in 2012.

The Dragon cargo carrier has been enhanced to carry as many as seven astronauts. It's known as Dragon v2 — version two.

While SpaceX is proud of its cargo deliveries, "the company was not founded to bring T-shirts and food and water up to space, it was founded to bring people into space," program manager Garrett Reisman, a former space station astronaut, told an industry conference late last month.

Boeing's entry was also a capsule, called CST-100. The letters stand for Crew Space Transportation, and the number refers to 100 kilometers or 62 miles, the official start of space.

Both the CST-100 and Dream Chaser called for flying atop an Atlas V rocket. The manned SpaceX capsule would use the company's own Falcon 9 rocket. Cape Canaveral will be the sole launch site.

NASA paid each of these three major contenders hundreds of millions of dollars in recent years to spur development.

Amazon.com founder Jeff Bezos' Blue Origin company in Washington state received NASA funding in the early rounds of competition, then said it would continue working on its own, unfunded by the government. The company had given sparse details about its progress and intent.

The third major contender, Sierra Nevada Corp., was developing a mini-shuttle in Colorado.