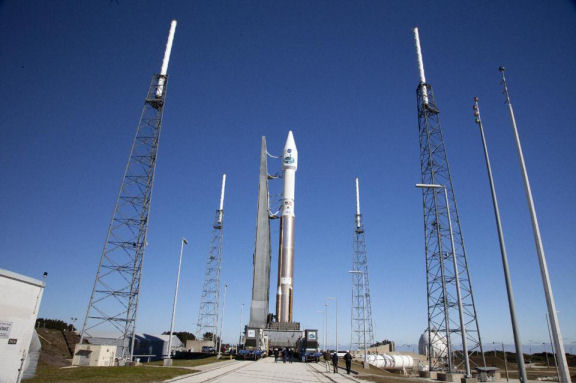 In a photo provided by NASA a United Launch Alliance Atlas V with TDRS-L atop, arrives at the launch pad at Cape Canaveral, Florida, Air Force Station's Launch Complex 41. The unmanned rocket is set to blast off Thursday night, January 23, 2014, with the latest, third-generation Tracking and Data Relay Satellite. (AP/Daniel Casper )

NASA uses the TDRS satellites to support the International Space Station and Hubble Space Telescope, among other craft. The network is 22,300 miles high, at various locations above the equator, and allows continuous two-way contact with the space station and its six inhabitants.

The TDRS system is so vital it's considered a national asset.

A modern-day human space program would be difficult if not impossible without the constant coverage provided by the TDRS satellites, said Badri Younes, NASA's deputy associate administrator for space communications and navigation. Ground stations — limited in number — would provide just a fraction of that capability.

Each satellite has a pair of dish antennas 15 feet in diameter.

"Not only are we getting global coverage 100 percent of the time, we are getting it in real time," Younes said, snapping his fingers, at a news conference earlier this week.

"Without such support, we'd have to live with coverage around the 10 to 15 percent," he said. "No human spaceflight program can be supported at this data rate. And even our ability to respond real time to emergency would diminish drastically. So that's why the TDRS has been declared as a national asset."

NASA is the primary user; the TDRS system also occasionally assists other countries' space agencies and the U.S. military. In 2002, a TDRS satellite allowed Massachusetts doctors to oversee knee surgery performed at the South Pole.

This newest $350 million satellite — which will work its way up from a temporarily low orbit — is designated "L'' in the TDRS series. NASA will rename it TDRS-12 once it's checked out in orbit, by late spring.

NASA launched its first TDRS in 1983 aboard a space shuttle. The previous satellite, TDRS-11, soared in January 2013.

Officials said they need six active TDRS satellites in orbit at any one time, along with a ready-to-go spare.

The newly launched, Boeing-built satellite will serve as an extra spare. The next in the series — TDRS-M — will be launched sometime in the early 2020s.

Of the 11 previous TDRS satellites, six are in service, one is in orbital storage, two are retired and one, No. 11, is still undergoing testing. No. 2 was destroyed with the space shuttle Challenger and crew in 1986.

Thursday's liftoff was delayed briefly by a last-minute data dropout with the Atlas V rocket. Launch controllers worked around the problem.