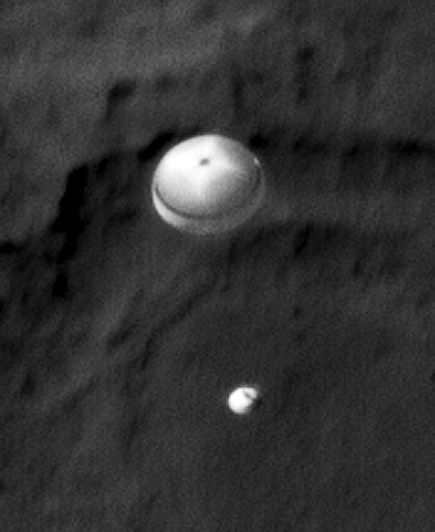 NASA scientists hailed the Mars rover Curiosity's flawless descent and landing as a "miracle of engineering" on Monday as they scanned early images of an ancient crater that may hold clues about whether life took hold on Earth's planetary cousin.

The one-ton, six-wheeled laboratory nailed an intricate and risky touchdown late on Sunday, much to the relief and joy of scientists and engineers eager to conduct NASA's first astrobiology mission since the 1970s Viking probes.

NASA scientists hailed the Mars rover Curiosity's flawless descent and landing as a "miracle of engineering" on Monday as they scanned early images of an ancient crater that may hold clues about whether life took hold on Earth's planetary cousin.

The one-ton, six-wheeled laboratory nailed an intricate and risky touchdown late on Sunday, much to the relief and joy of scientists and engineers eager to conduct NASA's first astrobiology mission since the 1970s Viking probes.

"We trained ourselves for eight years to think the worst all the time," Curiosity lead engineer Miguel San Martin said. "You can never turn that off."

Mission control engineers at the Jet Propulsion Laboratory near Los Angeles erupted in cheers when confirmation was received that Curiosity, touted as the first full-fledged mobile science lab sent to a distant world, had landed on the Martian surface.

NASA engineers said the feat stands as the most challenging and elaborate achievement in the history of robotic spaceflight, and opens the door to a new era in planetary exploration.

President Barack Obama hailed the accomplishment as an historic "point of national pride."

The landing also marked a much-welcome success and a major milestone for a U.S. space agency beset by budget cuts and the recent cancellation of its space shuttle program, NASA's centerpiece for 30 years.

The landing was a major initial hurdle for a two-year, $2.5 billion project whose primary focus is chemistry and geology. The daredevil nature of getting the rover to Mars captured the public's imagination.

Encased in a capsule-like protective shell, the nuclear-powered rover capped an eight-month voyage as it streaked into the thin Martian atmosphere at 13,200 miles per-hour (21,243 kilometers per hour), 17 times the speed of sound.

Plunging through the top of the atmosphere at an angle producing aerodynamic lift, the capsule's "guided entry" system used jet thrusters to steer the craft as it fell, making small course corrections and burning off most of its downward speed.

Closer to the ground, the vessel was slowed further by a giant supersonic parachute before a jet backpack and flying "sky crane" took over to deliver Curiosity the last mile to the surface.

The rover, about the size of a small sports car, came to rest as planned at the bottom of a vast, ancient impact bowl called Gale Crater, and near a towering mound of layered rock called Mount Sharp, which rises from the floor of the basin.

A trio of orbiting satellites monitored what NASA had billed as the "seven minutes of terror," but the anxiety proved to be unfounded.

From an orbital perch 211 miles away, NASA's sharp-eyed Mars Reconnaissance Orbiter snapped a stunning and serene picture of Curiosity gracefully riding beneath its massive parachute en route to Gale Crater, located near the planet's equator in its southern hemisphere.

At 10:32 p.m. PDT on Sunday (1:32 a.m. EDT on Monday/0532 GMT on Monday) flight controllers at JPL received the equivalent of a text message from Curiosity that its journey of 352 million miles (566 million km) had ended safely.

Seven minutes later, the rover transmitted a picture, related by another Mars orbiter called Odyssey, showing one of Curiosity's wheels on the planet's gravel-strewn surface.

"When you see a picture of the surface of the planet with the spacecraft on it, that is the miracle of engineering," lead scientist John Grotzinger told reporters on Monday.

With the late-afternoon sun slipping behind the crater's rim, Curiosity relayed six more sample pictures and the results of initial health checks of some of its 10 scientific instruments before shutting down for the Martian night.

Curiosity touched down about 6.2 miles from the foot of Mount Sharp, a monstrous formation of sedimentary rock that rises like a stack of cards three miles from the floor of Gale Crater. Taller from base to summit than California's Mount Whitney, the tallest mountain in the continental United States, Mount Sharp crests above the northern rim of the crater.

Scientists believe the mound may have formed from the remains of sediment that once completely filled the basin, offering a potentially valuable geologic record of the history of Mars, the planet most similar to Earth.

For that reason it is a key focus of interest for Curiosity scientists looking for evidence of Martian habitats that may have supported microbial life. It may be months, however, before Curiosity heads over to Mount Sharp.

"Our goal is not just to head for the hills," Grotzinger said.

Added project manager Pete Theisinger, "We have a priceless asset and we're not going to screw it up."

The rover comes equipped with an array of sophisticated instruments capable of analyzing samples of soil, rocks and atmosphere on the spot and beaming results back to Earth.

One is a laser gun that can zap a rock from 23 feet away to create a spark whose spectral image is analyzed by a special telescope to discern the mineral's chemical composition.

Among Curiosity's first tasks will be to chemically analyze the soil near its landing site.

"We're on gravel plain of Mars, a somewhat familiar scene," Grotzinger said, noting that the gravel seemed to be quite uniform in size. "We're a complex spacecraft, and simple geology is a good thing to start off with."

Scientists are also eager to explore rocks and pebbles that appear to have been transported by flowing water to a fan-shaped region near the landing site.

On Monday, the rover was expected to unfurl its dish-shaped antenna so it could better communicate directly with Earth.

"The surface mission of Curiosity has now begun," mission manager Mike Watkins said. "We built this rover not just to be launched or not just to land on Mars, but to actually drive on Mars and execute a very complex and beautiful science mission."