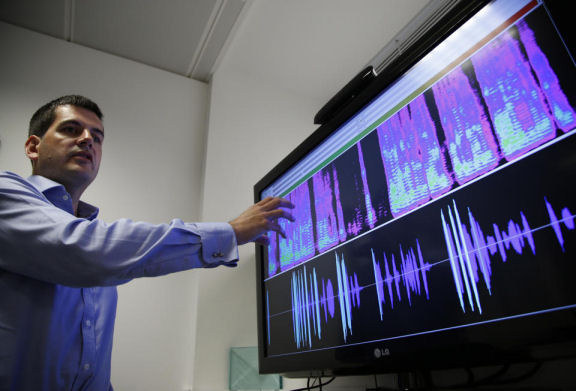 Over the telephone, in jail and online, a new digital bounty is being harvested: the human voice.

Businesses and governments around the world increasingly are turning to voice biometrics, or voiceprints, to pay pensions, collect taxes, track criminals and replace passwords.

Benoit Fauve, a speech scientist with a voice recognition technology company ValidSoft, displaying the voice biometric features of a telephone call during a demonstration in London September 12, 2014. (AP/Lefteris Pitarakis)

Over the telephone, in jail and online, a new digital bounty is being harvested: the human voice.

Businesses and governments around the world increasingly are turning to voice biometrics, or voiceprints, to pay pensions, collect taxes, track criminals and replace passwords.

"We sometimes call it the invisible biometric," said Mike Goldgof, an executive at Madrid-based AGNITiO, one of about 10 leading companies in the field.

Those companies have helped enter more than 65 million voiceprints into corporate and government databases, according to Associated Press interviews with dozens of industry representatives and records requests in the United States, Europe and elsewhere.

"There's a misconception that the technology we have today is only in the domain of the intelligence services, or the domain of 'Star Trek,'" said Paul Burmester, of London-based ValidSoft, a voice biometric vendor. "The technology is here today, well-proven and commonly available."

And in high demand.

Dan Miller, an analyst with Opus Research in San Francisco, estimates that the industry's revenue will roughly double from just under $400 million last year to between $730 million and $900 million next year.

Barclays PLC recently experimented with voiceprinting as an identification for its wealthiest clients. It was so successful that Barclays is rolling it out to the rest of its 12 million retail banking customers.

"The general feeling is that voice biometrics will be the de facto standard in the next two or three years," said Iain Hanlon, a Barclays executive.

Vendors say the timbre of a person's voice is unique in a way similar to the loops and whorls at the tips of someone's fingers.

Their technology measures the characteristics of a person's speech as air is expelled from the lungs, across the vocal folds of the larynx, up the pharynx, over the tongue, and out through the lips, nose, and teeth. Typical speaker recognition software compares those characteristics with data held on a server. If two voiceprints are similar enough, the system declares them a match.

The Vanguard Group Inc., a Pennsylvania-based mutual fund manager, is among the technology's many financial users. Tens of thousands of customers log in to their accounts by speaking the phrase: "At Vanguard, my voice is my password" into the phone.

"We've done a lot of testing, and looked at siblings, even twins," said executive John Buhl, whose voice was a bit hoarse during a telephone interview. "Even people with colds, like I have today, we looked at that."

The single largest implementation identified by the AP is in Turkey, where mobile phone company Turkcell has taken the voice biometric data of some 10 million customers using technology provided by market leader Nuance Communications Inc. But government agencies are catching up.

In the U.S., law enforcement officials use the technology to monitor inmates and track offenders who have been paroled.

In New Zealand, the Internal Revenue Department celebrated its 1 millionth voiceprint, leading the revenue minister to boast that his country had "the highest level of voice biometric enrollments per capita in the world."

In South Africa, roughly 7 million voiceprints have been collected by the country's Social Security Agency, in part to verify that those claiming pensions are still alive.

Activists worry that the popularity of voiceprinting has a downside.

"It's more mass surveillance," said Sadhbh McCarthy, an Irish privacy researcher. "The next thing you know, that will be given to border guards, and you'll need to speak into a microphone when you get back from vacation."