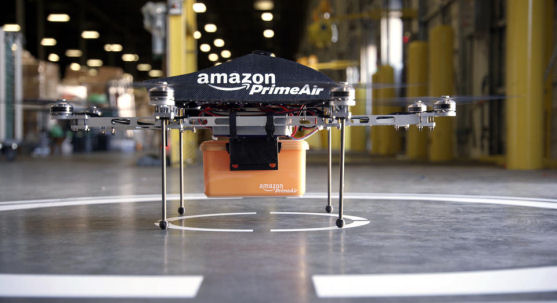 Amazon is working on a way to get packages to customers in 30 minutes or less — via self-guided drone.

Consider it the modern version of a pizza delivery boy, minus the awkward teenager.

Prime Air unmanned aircraft project that Amazon is working on in its research and development labs. (AP/Amazon)

Amazon is working on a way to get packages to customers in 30 minutes or less — via self-guided drone.

Consider it the modern version of a pizza delivery boy, minus the awkward teenager.

Amazon.com Inc. says it's working on the so-called Prime Air unmanned aircraft project but it will take years to advance the technology and for the Federal Aviation Administration to create the necessary rules and regulations.

The project was first reported by CBS' "60 Minutes" Sunday night, hours before millions of shoppers turned to their computers to hunt Cyber Monday bargains.

Amazon CEO Jeff Bezos said in the interview that while his octocopters look like something out of science fiction, there's no reason they can't be used as delivery vehicles.

Bezos said the drones can carry packages that weigh up to five pounds, which covers about 86 percent of the items Amazon delivers. The drones the company is testing have a range of about 10 miles, which Bezos noted could cover a significant portion of the population in urban areas.

Bezos told "60 Minutes" the project could become a working service in four or five years.

Unlike the drones used by the military, Bezos' proposed flying machines won't need humans to control them remotely. Amazon's drones would receive a set of GPS coordinates and automatically fly to them, presumably avoiding buildings, power lines and other obstacles.

Delivery drones raise a host of concerns, from air traffic safety to homeland security and privacy. There are technological and legal obstacles, too —similar to Google's experimental driverless car. How do you design a machine that safely navigates the roads or skies without hitting anything? And, if an accident occurs, who's legally liable?

Delivering packages by drone might be impossible in a city like Washington D.C. which has many no-fly zones.

But technology entrepreneur and futurist Ray Kurzweil notes that "technology has always been a double edged sword."

"Fire kept us warm and cooked our food but also was used to burn down our villages," says Kurzweil.

"It's fascinating as an idea and probably very hard to execute," says Tim Bajarin, an analyst with Creative Strategies who sees Bezos as an unconventional thinker. "If he could really deliver something you order within 30 minutes, he would rewrite the rules of online retail."

Amazon has already done that once. In 1995, with investments from family and friends, Bezos began operating Amazon as an online bookseller out of a Seattle garage. Over nearly two decades, Amazon grew to become the world's largest online retailer, selling everything from shoes to groceries to diapers and power tools.

Amazon spends heavily on growing its business, improving order fulfillment and expanding into new areas. Those investments have come at the expense of consistent profitability, but investors have been largely forgiving, focusing on the company's long-term promise and double-digit revenue growth.

The company spent almost $2.9 billion in shipping last year, accounting for 4.7 percent of its net sales.

There is no prohibition on flying drones for recreational use, but since 2007, the Federal Aviation Administration has said they can't be used for commercial purposes.

Schulman is currently challenging that regulation before a federal administrative law judge on behalf of a client who was using a radio-controlled aircraft to shoot video for an advertising agency. Autonomous flights like Amazon is proposing, without somebody at the controls, are also prohibited.

The FAA is slowly moving forward with guidelines on commercial drone use. Last year, Congress directed the agency to grant drones access to U.S. skies by September 2015. But the agency already has missed several key deadlines and said the process would take longer than Congress expected.

The FAA plans to propose rules next year that could allow limited use of drones weighing up to 55 pounds. But those rules are expected to include major restrictions on where drones can fly, posing significant limits on what Amazon could do. Many of the commercial advances in drone use have come out of Europe, Australia, and Japan. In Australia, for instance, an electric company is using drones to check on remote power lines.

"The delay has really been to the disadvantage of companies here," Schulman says. "Generally, the government wants to promote the advancement of science and technology. In this case, the government has done exactly the opposite and thwarted the ability of small, startup companies to develop commercial applications for this revolutionary technology."

Amazon isn't the only company awaiting guidelines. A Domino's franchise in the United Kingdom released a test flight video in June of the "DomiCopter," a drone used to deliver hot pizza.

"We think it's cool that places like Amazon are exploring the concept," says Domino's spokesman Chris Brandon. "We'd be surprised if the FAA ever let this 'fly' in the States — but we will surely stay tuned to see where this all goes."

Matt Waite, a journalism professor at the University of Nebraska and head of the university's Drone Journalism Lab, says a bigger problem for Amazon is that the rules are not expected to allow autonomous drones, so a remote pilot would have to be in command of the aircraft at all times.

Indeed, the FAA said Monday that it is moving forward with "regulations and standards for the safe integration of remote piloted (drones) to meet increased demand." The agency reiterated that "autonomous (drone) operation is not currently allowed in the United States."

Given the slow pace at which the FAA typically approves regulations, Waite calls Bezos' prediction of four or five years for approval unrealistic.

Safety concerns could be the real obstacle in delaying drones for widespread commercial use.

"You're putting a device with eight rapidly spinning blades into areas where people are assumed to be," Waite says. "The threat to people on the ground is significant."

It's not hard to imagine that the world's biggest online retailer has some significant lobbying muscle and might be able to persuade the FAA to alter the rules.

Amazon spokeswoman Mary Osako says the company has been in contact with the FAA "as they are actively working on necessary regulation."

One of the biggest promises for civilian drone use is in agriculture because of the industry's largely unpopulated, wide open spaces. Delivering Amazon packages in midtown Manhattan will be much trickier. But the savings of such a delivery system only come in large, urban areas.

Besides regulatory approval, Amazon's biggest challenge will be to develop a collision avoidance system, says Darryl Jenkins, a consultant who gave up on the commercial airline industry and now focuses on drones.

Who is to blame, Jenkins asked, if the drone hits a bird, crashes into a building? Who is going to insure the deliveries?

There are also technical questions. Who will recharge the drone batteries? How many deliveries can the machines make before needing service?

"Jeff Bezos might be the single person in the universe who could make something like this happen," Jenkins says. "For what it worth, this is a guy who's totally changed retailing."

"Commercial use of drones is an interesting technology, and we're certainly going to continue to evaluate it," Gershenhorn says.

The U.S. Postal Service and FedEx wouldn't speculate about using drones for delivery.

With reports from Barbara Ortutay in New York, David Koenig in Dallas and Sam Hananel in Washington D.C.