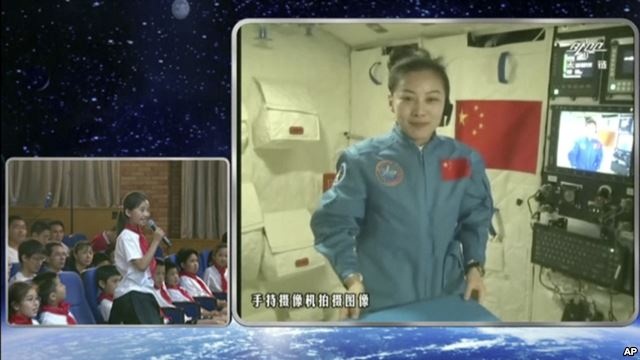 Speaking to students via live video, Ms Wang used spinning tops, a ball, water and a fellow astronaut to explain physics in zero-gravity.

Chinese astronaut Wang Yaping, seen on screen, listens to a question from a school girl in Beijing, China during a live broadcast from Tiangong-1 space laboratory, June 20, 2013. (AP/ CCTV)

Speaking to students via live video, Ms Wang used spinning tops, a ball, water and a fellow astronaut to explain physics in zero-gravity.

She was speaking from the Tiangong-1 space laboratory, where the Shenzhou spacecraft is currently docked,

China's fifth manned space mission, Shenzhou-10, is scheduled to end around 25 or 26 June.

The crew is also expected to attempt a manual docking later on Thursday.

This will involve getting back inside their Shenzhou capsule, unhooking from Tiangong and then flying around the lab to re-attach the capsule to the laboratory.

Ms Yang used difference experiments to demonstrate the concepts of weight and mass in space.

After showing how normal scales did not work in space, she used a special scale to measure the mass of crew commander Nie Haisheng, using Newton's second law of motion - measuring the mass of an object through force and acceleration.

At another point, to show how objects move in the microgravity environment of space, she asked her colleague to help her rotate 90 degrees, and then 180 degrees, from the floor of the laboratory.

Spinning tops were used to create gyroscopic motion in space, and a ball attached to a string to demonstrate pendulum motion.

Towards the end of the class, Ms Yang made a film of water using a metal ring, explained by the increased surface tension of water in space. She then turned the film of water into a water ball by pouring more water onto it, to wide applause from students watching in China.

Around 330 primary and secondary school students watched the lecture from a special classroom in Beijing, where they could also ask Ms Wang questions through a live video feed, state media said.

In response to a student's question, Ms Yang described what she could see in space.

"The stars we see are much brighter, but they do not twinkle," she said, explaining this was due to the lack of Earth's obstructing atmosphere.

"The sky we see isn't blue, but black. And every day, we can see the sun rise 16 times because we circle the Earth every 90 minutes"

An estimated 60 million students and teachers around China were also expected to watch the lecture live, the Ministry of Education said.