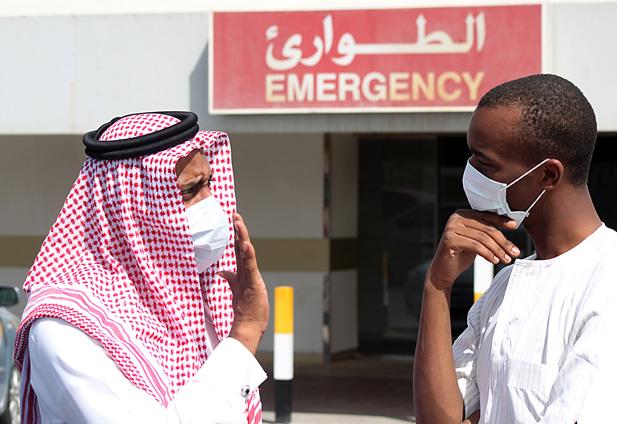 "My greatest concern right now is the novel coronavirus," Chan warned the representatives of two hundred nations gathered in Geneva. "We do not know where the virus hides in nature. We do not know how people are getting infected. Until we answer these questions, we are empty-handed when it comes to prevention."

"My greatest concern right now is the novel coronavirus," Chan warned the representatives of two hundred nations gathered in Geneva. "We do not know where the virus hides in nature. We do not know how people are getting infected. Until we answer these questions, we are empty-handed when it comes to prevention."

But impeding an effective response is a dispute over rights to develop a treatment for the virus. The case brings to the fore a growing debate over International Health Regulations, interpretations of patent rights, and the free exchange of scientific samples and information. Meanwhile, the epidemic has already caused forty-nine cases in seven countries, killing twenty-seven of them.

At the center of the dispute is a Dutch laboratory that claims all rights to the genetic sequence of the Middle East Respiratory Syndrome coronavirus [MERS-CoV]. Saudi Arabia's deputy health minister, Ziad Memish, told the WHO meeting that "someone"--a reference to Egyptian virologist Ali Zaki--mailed a sample of the new SARS-like virus out of his country without government consent in June 2012, giving it to Dutch virologist Ron Fouchier of Erasmus Medical Center in Rotterdam.

"The virus was sent out of the country and it was patented, contracts were signed with vaccine companies and anti-viral drug companies, and that's why they have a MTA [Material Transfer Agreement] to be signed by anybody who can utilize that virus, and that should not happen," Memish said.

Though Memish referred to a "patent," the Dutch team has not patented the viral genetic sequence but has placed it under an MTA, which requires sample recipients to contractually agree not to develop products or share the sample without the permission of Erasmus and the Fouchier laboratory. Memish said that the Dutch MTA was preventing Saudi Arabia from stopping the MERS-CoV outbreak, which appears to have started eleven months ago in the Eastern part of his country. The Dutch team denies the MTA is slowing work on the outbreak, saying it has given virus samples to any lab that has requested it.

Courts in North America and Europe have ruled that it is possible to patent life forms or their genetic sequences, spurring the practice of claiming patent control on newly identified microoganisms. Such patents give owner rights over royalties on all products derived from the genetic sequence, including vaccines, diagnostics, and genetically targeted treatments. But they have spawned controversy outside of wealthy countries, since they are perceived as guaranteeing profits for Western pharmaceuticals at the expense of country-of-origin use and access.

There is no cure, rapid diagnostic test, or vaccine for MERS-CoV, or for any of the class of coronaviruses, which includes SARS--the scourge that erupted from China in 2003.

Like the SARS virus, MERS ravages the lungs of infected people, causing pneumonia and acute respiratory distress. Also like SARS, it is previously unknown to human immune systems, so response to infection can include the classic "cytokine storm" reaction of an overresponsive immune system that hits the virus with all it's got, creating collateral damage all over the body. But unlike SARS, it also attacks the kidneys, causing renal failure.

Epidemiologically, MERS seems to be similar to SARS: It is spread by close contact, and can be airborne-transmitted between people. Both viruses can be dangerous for health-care workers and spread within hospitals. There is no rapid diagnostic test for MERS, which puts doctors and nurses at special risk since they cannot easily distinguish the symptoms between early-stage MERS-CoV patients and regular pneumonia.

The new MERS-CoV is shrouded in mystery right now as Saudi investigators are unable to determine its reservoir species--where did it come from--how it is spread from that species to people, a method for rapid diagnosis, proper treatment, and best approaches to hospital infection control. Suspicions point to fruit bats in the eastern Al-Ahsa province of Saudi Arabia, where the bulk of the cases have occurred.

Eleven months ago, Zaki told the Guardian, he was called in as a consultant on a mysterious case in his Jeddah hospital. Zaki tried to identify the virus, but the patient died less than twenty-four hours after he received the sample. Soon, a second case came his way, and Zaki mailed a sample to his friend, Fouchier. Zaki sent a notice in September 2012 to ProMED, a disease alert system run by the Infectious Diseases Society of America. Under pressure from the Saudi government, Zaki's hospital in Jeddah fired him when the ProMED notice was posted, and he moved to Cairo.

Wider recognition of this new disease came with the case of a Qatari man who flew to London and came down with acute respiratory distress and kidney failure. Physicians at St. Thomas's Hospital saw Zaki's September ProMED posting, noted the patient had traveled in Saudi Arabia, and concluded they were dealing with a new virus. The London team isolated a viral sample and compared it to the genetic sequence Fouchier had prepared of Zaki's sample--they were a match. UK authorities went public with the news, spawning the first tier of worldwide attention to the existence of a new human virus. Fouchier, Zaki, and others co-authored an analysis that appeared in the November 2012 issue of the New England Journal of Medicine.

Saudi Arabia's Memish complained at the WHO meeting that there was a lag of three months, between June and September 2012, "where we were not aware of the discovery of the virus." The WHO's Chan responded by calling on Assembly delegates to share specimens with WHO collaborating centers, not in a bilateral manner. "No IP will stand in the way of public health actions," she said.

Memish last week agreed to send samples of the virus to the U.S. Centers for Disease Control in Atlanta. It is clearly more difficult for the Saudis to work around the MTA directly with other governments' labs. Under one crucial arrangement with a nongovernmental U.S. lab, samples have been shared from Memish's office, and data analysis may soon be released. The arrangement is not public at this time, and the research is not completed.

In contrast to the complex and slow pace of MERS-CoV sharing, China shared H7N9 flu sequences with open source Internet sites within four weeks of the first patient cases in Shanghai, and sent viral samples all over the world within less than two months. Canada's National Microbiology Laboratory Director Francis Plummer told the CBC in mid-May that his Winnipeg lab had signed the Dutch MTA and obtained a research sample after prolonged legal negotiations. Plummer contrasted his difficulties in obtaining a sample from the Dutch to China's immediate and open sharing of H7N9 influenza samples with his facility.

In a press release, Erasmus Medical Center spelled out the terms of its original MTA and said it was the first to identify the new MERS coronavirus. "For shipment of the virus it is mandatory that a material transfer agreement [MTA] is signed by the recipient institution," the press statement said. "[The] MTA covers issues like liability and limitations to commercial use. Consequently the virus may not be distributed to third parties without permission."

Virus-hunter Dr. Ian Lipkin of the Mailman School of Public Health at Columbia University, who has worked on MERS, told me that "infectious agents that have implications for public health should be shared freely with any and all qualified investigators who are committed to working safely with those agents and are equipped to do so." He added: "Language that restricts basic or applied research or ties it to licensing fees has the potential to cripple global biosecurity."

But international health law expert David Fidler of the University of Indiana told Science, "The press release and the MTA preserve Erasmus's rights to seek IP rights for vaccines and medicines related to research done on the virus sample from Saudi Arabia. [The MTA is] a fairly standard agreement. There is nothing here that suggests to me that this needed a massive amount of negotiation."

However, Chan called upon the gathered delegates at the World Health Assembly to stand against intellectual property blocks to epidemic responses. The question of ownership of discovery has become the top wedge issue in global health today, underscoring debate on everything from pharmaceutical safety/counterfeiting to availability of antibiotics for TB care.

Chan and WHO are especially sensitive to the issue because of the 2007-2008 battle between the agency and the Indonesian government regarding the H5N1 flu virus and then-minister of health Siti Supari's insistence on the existence of "viral sovereignty." Supari declined to share samples of the dangerous bird flu viruses that were then rampant in her country with outsiders, on the grounds that they would be used to manufacture patented products that would benefit foreign companies, and that the products they produced would be unaffordable to Indonesians.

Supari's contentions spawned a long, difficult period of negotiations that led to the 2011 PIP, the WHO's Pandemic Influenza Preparedness Framework. The PIP augments the International Health Regulations, creating a series of understandings that are flu-specific regarding sample sharing, patents, and profits from products derived from viral discovery. Chan's response to Memish's accusations no doubt stems from her concern that the Saudis could invoke provisions of the flu-specific PIP, demanding control over the MERS-CoV samples, patents, and products.