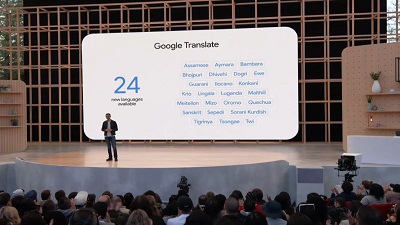 If, up to now, you’ve ever been stumped by something written in Krio or Ewe or Tigrinya then, unlike for more than 100 other languages, Google Translate was not going to help you out.

If, up to now, you’ve ever been stumped by something written in Krio or Ewe or Tigrinya then, unlike for more than 100 other languages, Google Translate was not going to help you out.

But that’s just changed as Google has announced the addition of 24 languages - including 10 spoken in Africa - to this function.

The new African languages are:

Several other African languages were already available, including Amharic, Hausa and Somali.

In the past, the software used to translate as well as learn how to improve the interpretation relied on being fed material that had already been translated.

There is a large and growing amount of text in the more widely spoken and used languages - but this is not the case for many others.

Google has said that these new additions rely on novel software which does not require reference to previous examples.

Google Translate’s research scientist Isaac Caswell told the BBC that this work was part of “expanding coverage to many communities who were very much overlooked not just by Google but other technologies in general”.

But will the translations be accurate? Many polyglots have up to now noted problems with the languages already available.

“For many supported languages, even the largest languages in Africa that we have supported - say like Yoruba, Igbo, the translation is not great. It will definitely get the idea across but often it will loss much of the subtlety of the language,” Mr Caswell admitted.

With the new languages, he said, it would be no different. But the people who helped in the research said it was a good place to start.

“Some of the Krio [speakers] said, ‘Don’t let the perfect be the enemy of the good.’

“In the end, we have to make the call. And my impression from other people I have talked to was that it was a very positive thing for them.”