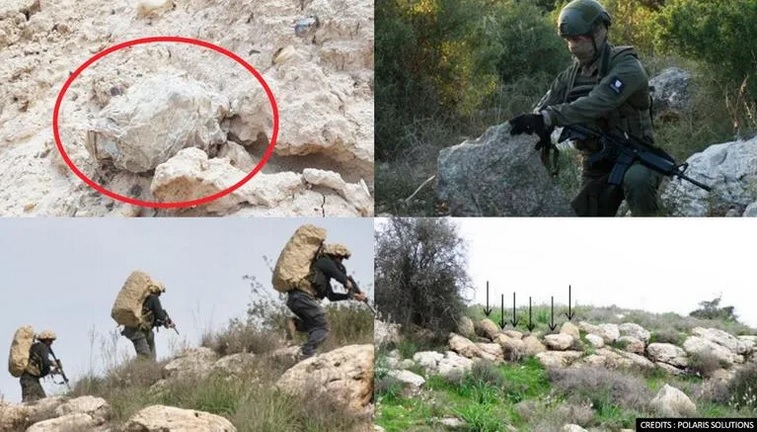 (Notice the binocular near the center of the frame). Polaris Solutions shows how their Kit 300 camouflage sheet can be used for a wide variety of purposes, including setting up a nearly undetectable post to spy on the enemy. (Photo: Maya Margit)

In cooperation with the Defense Ministry, the company recently unveiled Kit 300, an innovative camouflage sheet made out of a material that provides multispectral concealment.

According to Polaris Solutions, nothing else like its camouflage sheet exists on the market today.

The lightweight sheet is made out of a special thermal visual concealment (TVC) material, comprised of metals, polymers and microfibers. Thanks to TVC, soldiers are much more difficult to see both with the naked eye and with thermal imaging equipment.

Thus, it can be used for counter-surveillance in a wide variety of military scenarios.

The idea for the technology was born in 2006 during the Second Lebanon War. At the time, Picciotto was in a special IDF unit and saw firsthand that soldiers on the ground required better protection from their enemies’ thermal cameras and night-vision equipment.

“You have to be better than the enemy and we understood that there were big gaps in the survivability part,” Picciotto recalled.

Polaris Solutions was founded a few years later, in 2010, and is now headquartered in the Israeli port city of Caesarea. Several former IDF soldiers with special forces training have lent their expertise to the company, which also produces a range of tough and durable tactical textiles and patented military products.
Kit 300 was specifically developed to counter new and ever-evolving challenges on the battlefield.

“Camouflage nets haven't changed too much in the past 50 year,” Yonatan Pinkas, director of marketing at Polaris Solutions, told The Media Line.
“We wanted to bring in a new type of material,” he added. “So TVC was born.”

Each sheet comes with different coloration on each side: one for dense vegetation and the other for more desert-like landscapes. In addition, the company customizes patterns and coloring based on client needs and geographic region.

The sturdy material can be molded into three-dimensional shapes or folded into a compact roll. It also is waterproof, can provide shelter or be fashioned into a stretcher to carry wounded soldiers on the battlefield.

“It has additional value in medical use,” Pinkas noted. For example, he said, it can carry weight up to 250 kilograms, can be used as a splint to immobilize a broken bone and can serve as a hypothermia blanket.

Polaris Solutions is working with Israel’s defense industry as well as government agencies abroad, including special forces units in both Canada and the United States. Internationally, Kit 300 is known as Jag Hide.

“Our products are being tested by some units, which I cannot name, and we have several mutual operations there,” Picciotto said.

Though the company’s TVC products are unique, other tech innovators have recently made groundbreaking forays in the stealth materials arena.

Last year, Canadian company HyperStealth Biotechnology Corporation revealed a light-bending material called Quantum Stealth that appears to make a person vanish. The company refers to the invention as a “broadband invisibility cloak,” though its efficacy largely depends on the angle and distance from which it is viewed.
A number of technical hurdles remain before a true invisibility cloak is developed.

While invisibility was once the realm of science fiction or fantasy, Polaris Solutions has revealed that it is in the process of developing products that could soon turn the idea into a reality. But it’s going to take between five years and 10 years to develop “real deep tech” that can be turned into a line of products, according to Picciotto.